He seemed comfortable enough. He answered the questions that were being asked of him with a candor that seemed so sincere. He smiled frequently, chuckled often and frowned not once.

With a simple, black crew neck sweater, Anthony Davis fielded questions from all around, but today, he fields the biggest of them all.

What’s next for the New Orleans Pelicans—his team?

Yes, he seemed quite comfortable in New York City. Davis was making his second consecutive All-Star appearance and had already endured a grueling availability schedule that had him a bit exhausted. But he took it all in stride.

But now, for Davis, it is all just beginning.

Back then, his New Orleans Pelicans were still mostly regarded as a team that was searching for itself and attempting to find its way in the gauntlet that has become the NBA’s Western Conference. But with Davis showing appreciable improvement, with the well-experienced Alvin Gentry assuming the bench and what seems to be an improving core around him, the Pelicans can suddenly look around at the Western Conference and see where they fit in.

They can watch as the Dallas Mavericks and Portland Trail Blazers morph and wonder what it means for their place within the pecking order of the conference. And now, collectively, the NBA world can look at New Orleans and wonder if the Pelicans can do their best impression of a Phoenix and take flight.

Lanky and rangy, Davis made a name for himself while spending his one year at the University of Kentucky. On his broad shoulders, with the help of teammate Michael Kidd-Gilchrist, Davis carried John Calipari and his Wildcats to the 2012 NCAA Championship.

By the time the season ended, Davis was more than a lock for the first overall selection of the 2012 NBA Draft—he was a prospect who was regarded as being a surefire Hall-of-Famer. His unique blend of court vision, agility, size, timing and instincts had not been seen since Kevin Garnett. Unlike Garnett, though, Davis had grown up in the age of social media and advanced statistics. By the time he began the pre-draft process, Davis had already been under tremendous pressure to be more than “a contributor” at the NBA level. We all already knew that as one of the most decorated pre-professional players in American basketball history that he would not only be asked to help a floundering franchise, he would be asked to rescue it.

Two Hall-of-Fame head coaches were amongst the earliest believers in Davis. Bob Knight called Davis “a young Bill Russell” and suggested that Davis, like Russell, would go on to be one of the most valuable players not only in basketball history, but in all of team sports.

Larry Brown, someone who has seen and done just about everything there is to be seen and done in the game of basketball, developed a long-standing reputation of being hard on young players. As an NBA coach, Brown was renowned amongst players as preaching the mantra of “playing the right way,” and whether he would admit it or not, the evidence suggests that Brown felt that the younger players of the current generation had no idea about how basketball was “supposed” to be played.

In that regard, then, it was especially noteworthy for the coach to bestow epic praise upon Davis.

“When Davis enters the draft… the team that gets him, they’re gonna win over 50 games,” Brown said on an ESPN radio show back in April 2012. “He’s that good.”

The coach gushed even more, putting Davis into the class of all-time greats.

“When I was growing up, I saw Oscar [Robertson] get 56 in the Garden,” Brown said. “I’ve watched Wilt [Chamberlain] forever. I saw [Bill] Russell in the Holiday Festival when I was a young kid. Davis is in that class.”

After watching Davis over the past three years, we now know that Brown was wrong about at least one thing, as the Pelicans managed just 27 wins in Davis’ rookie year.

Over that duration, though, his steady growth—his ball-handling, midrange shooting and post-game, especially—has been eye-opening. After putting together a jaw- 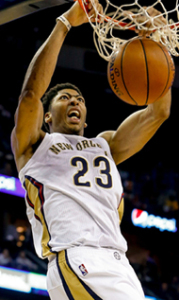 dropping 2014-15 season which saw him turn in per-game averages of 24.4 points, 10.2 rebounds, 2.2 assists, 1.5 steals and 2.9 blocks, Davis led his Pelicans to the eighth seed in the Western Conference playoffs. It was the first time the franchise had qualified for the postseason since 2011—back when Chris Paul was patrolling the perimeter.

For it all, Davis placed fifth in the Most Valuable Player Award balloting, finishing behind Stephen Curry, James Harden, LeBron James and Russell Westbrook, respectively. With that to his name, there is simply no objective measure by which one can claim Davis to not be a “superstar.”

And now, in the ever-changing conference, we enter the 2015-16 season wondering where Davis and his Pelicans will land. This past summer, Davis added 14 pounds of muscle to his once wiry frame, but more importantly, he has maintained his body fat at 10 percent. Those that have seen him in person this past summer have seen, firsthand, that the difference in his physique is almost shocking. He is said to be much stronger, but also faster and quicker. What already was a devastating combination of gifts may have become all the more effective.

Without question, to this point, Davis has been all that we could have dreamed of. At this early point in his career, at just 22 years old, he has already surpassed the expectations that could have been had for him at such an early point.

Clearly, for him, that’s saying a lot.

As he readies to begin his fourth season, the Davis’ light shines so brightly, it’s blinding. His ceiling is nowhere in sight and already, amazingly, he can claim to be one of the best players in the entire league. On those broad shoulders and with those added muscles, we can only imagine how high Davis can help his Pelicans soar.

As the Pelicans attempt to rise, we can point to the examples of LeBron James and Russell Westbrook as conclusive evidence that one man—no matter how great—cannot do it all. As well as patience, to win big in the NBA, a team needs pieces and it certainly needs some experience.

That is why the hiring of Alvin Gentry made perfect sense.

After spending five years as the head coach in New Orleans, after amassing a 173-221 record, this past summer, the franchise opted to fire Monty Williams and replace him with Gentry—a coach who has 35 years of experience.

Like the aforementioned Larry Brown, Gentry has seen everything there is to see as it relates to basketball. Interestingly enough, it was under Brown that Gentry began the NBA stint of his coaching career, as Brown hired him to serve as his assistant coach on the bench of the San Antonio Spurs.

Since then, Gentry has coached under the likes of Doug Collins, Mike D’Antoni and Doc Rivers and has maintained a close friendship with Gregg Popovich over the years. The two became friends in 1989 when they were brought together on Larry Brown’s bench in San Antonio.

Finally, after enjoying head coaching stints in Miami, Detroit, Los Angeles and Phoenix, Gentry played an instrumental role in helping to lead the Golden State Warriors to the 2015 NBA Championship. Steve Kerr deserves an immense amount of credit for what he accomplished as a rookie head coach, but Kerr himself will be the first to tell you that the Warriors would not have achieved highly last season without the meticulous preparation and support from an amazing staff.

Winning in the NBA requires lots of things: talent, intelligence, good fortune and preparation are among them. Still, though, it all starts with a superstar-caliber talent and a good head coach.

It seems that the Pelicans are now covered in each of those regards.

After missing a combined 90 games over the past two seasons, the Pelicans are hoping that Jrue Holiday does not join the likes of Eric Gordon and Tyreke Evans as all-star caliber players whose injuries got them best of them in the early stages of their careers. Evans is not close to being the player he was as a sensational rookie 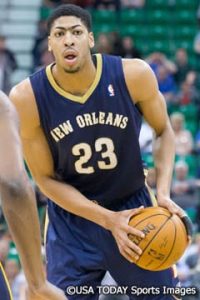 and Gordon has mostly crumbled under persistent injuries and the expectations that came with the franchise opting to match the four-year, $58 million maximum offer sheet that he signed with the Phoenix Suns in July 2012.

So here and now, with Davis, Holiday and Gentry, the Pelicans have seen the Portland Trail Blazers become the latest franchise to be withdrawn from the title chase and realize that the Dallas Mavericks and Memphis Grizzlies are each one year older.

The Pelicans will look up at the Oklahoma City Thunder, Los Angeles Clippers, Golden State Warriors, San Antonio Spurs and the Houston Rockets and wonder what it will take for them to belong.

Yes, they will look up at them and know that, in their progression as a unit, for them, this season is imperative.

With the gifted Davis leading the charge, despite the conference getting tougher and more top-heavy, in New Orleans, the Pelicans are looking toward the 2015-16 season as the one where they cement themselves as a team on the rise.

Tall, proud and hungry—behind the mighty Davis and his broad shoulders—this season, the team is poised to spread its wings and fly.