Over the course of the past 20 years, the San Antonio Spurs have proven to be the NBA’s model franchise, and it’s not even close. And as they do battle with history while in the mega-shadow cast by the Golden State Warriors, entering play on March 6 with a 53-9 record, it’s happening again.

We are ignoring the Spurs and discounting their ability to walk away with all of the marbles, once again.

Whether it’s Michael Jordan’s quest for a three-peat somehow outshining Tim Duncan’s historically good rookie season or the 1999 NBA Finals occurring both after a lockout shortened season and in the absence of Patrick Ewing, it seems that there has always been something better and more interesting to discuss and observe than the boring old San Antonio Spurs.

That’s okay, though. Gregg Popovich would have it no other way.

With 38 consecutive wins at the SBC Center in San Antonio, the Spurs have quietly solidified themselves as one of the most dominant home teams in NBA history. As the Warriors have captured our imaginations and trod along toward 73 wins, the Spurs are quietly just two games behind the pace set by the 1995-96 Chicago Bulls, as well.

Amazingly, we are witnessing a season wherein two teams will have an opportunity to win 70 games, but as usual, nobody cares about or talks about the Spurs. They will continue to play the role of the overlooked underdog while lurking in the shadows and awaiting their opportunity to snatch the Larry O’Brien trophy out from underneath everyone’s noses.

In our basketball culture today, where fans are generally more educated about the game and—thanks to advanced statistics—have metrics and measurements for things that were never discussed as recently as 10 years ago, you still don’t hear much about these guys.

Want to know what the epitome of the culture of the Spurs is? Look no further than Tim Duncan.

As Kobe Bryant puts the finishing touches on his NBA career and receives affection and celebration everywhere he goes, we easily regard him as one of the all-time great NBA players and someone whom the game will miss dearly. For an entire season, we will have known that Bryant was on his way out. For goodness sake, the All-Star game was dedicated to him.

In typical Spurs fashion, though, we will simply wake up one August morning to a report saying that Tim Duncan has decided to retire, and poof, like that, he will be gone.

Meanwhile, one would be hard pressed to argue that Bryant has had a better career than Duncan, and it 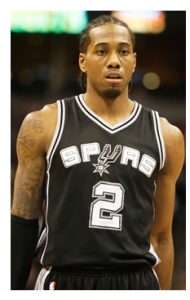 would be nearly impossible to argue the fact that Duncan’s decline into his twilight has been both more productive and more successful.

Yet, that’s how we treat the Spurs.

In Kawhi Leonard, the torchbearer for this franchise, we have seen the slow progression of a quiet, unassuming, humble “worker bee” who keeps his mouth shut, shows up early to the gym and listens to his coaches.

Is Leonard the best all-around player in the NBA today? Upon first glance, merely reading that question might seem ridiculous, but if you’ve observed Leonard as closely as I have over the years and spoken with him, tracked his progression and picked his brain, you would understand that he has no discernible weakness.

And if you stopped watching Stephen Curry replays long enough, you would realize or remember that it is Leonard—the reigning Defensive Player of the Year—who is often charged with guarding the other team’s best perimeter player. The Spurs just so happen to be on a historical winning pace and just so happen to be led by Leonard’s 20.8 points per game.

In just his fifth year, the 24-year-old honestly has no equal in the league and should finish in the Top 5 of the Most Valuable Player vote.

But alas, Leonard plays for the Spurs, so that’s not very likely to happen.

Steve Kerr is one of the brilliant basketball minds around, and anyone that knows him would second that.

Want to know what keeps Kerr up at night?

Want to know what Kerr’s biggest fear is?

Winning 73 or 74 games and then being ousted after Game 7 of the Western Conference Finals. At this point, the thought of that seems almost incomprehensible—and make no mistake about it, the Warriors are going to be magnificently tough to beat—but if there is one team that can do it, it’s the Spurs.

Few seem to think so, though, which again, should not strike you as a major surprise.

Amazingly, the Spurs and Warriors will do battle three more times before the end of the season: March 19, April 7 and April 10. The first and last of those contests will be held in San Antonio, but the final two occur in the final week of the regular season, so players from either side will probably be under minutes restrictions.

Besides, not wanting to tip his hand before their inevitable playoff meeting, few expect Popovich to deploy any of the strategic maneuvers he and his staff have been cooking up for the Warriors, which likely includes a big lineup that will probably cause concern for the Warriors.

With LaMarcus Aldridge and even David West having entered the fold in San Antonio, the Spurs have quietly assembled a team and rotation full of big men who have tremendous back-to-basket games while simultaneously possessing magnificent floor-reading and passing ability. With the Spurs and their motion based offense, the fact that the Warriors like to play small presents a very interesting matchup situation. In all likelihood, we will see a lineup featuring Duncan, Aldridge and Boris Diaw in the front court with Tony Parker and Kawhi Leonard in the backcourt. Leonard’s ability to hit the three and Parker’s ability to dive to the basket and play off of the ball would fit seamlessly with the back-to-basket and floor-reading ability of the three front court players. The Spurs, necessarily, would have to operate out of a half-court set and slow the Warriors down. Deploying such a lineup would also require the Spurs to take care of the basketball, because any turnover is likely to result in a quick score on the other end.

Still, the pros here are that Popovich would put Kerr in a situation where he would either have to depend on Draymond Green to successfully defend Duncan or Aldridge in one-on-one situations in the low post or play two of Andrew Bogut, Festus Ezeli, Marresse Speights or Anderson Varejao at the same time. And although Green is a magnificent post-defender, especially considering his stature, the task of being successful against Aldridge and/or Duncan over the course of seven games is daunting.

There’s a long way to go before the Spurs are able to deploy their full force on the Warriors. And in the tough Western Conference—especially with the Los Angeles Clippers playing with a magnificent chip on their shoulders—nothing is guaranteed.

In the end, though, the acquisition of Aldridge fits in with the Spurs perfectly. He has many of the same offensive gifts and talents as Duncan and has fully bought into the ball-moving and floor-spacing requisites of the San Antonio offense.

Certainly, with Aldridge added to the fold and Duncan being pitch-counted to the tune of playing a career-low 25 minutes per game, the Spurs are just as formidable as their 53-9 record would suggest. And if and when they get an opportunity to take on the Warriors in the playoffs, maybe at that point the world will begin paying attention.

With their playoff spot having recently been clinched, for the Spurs, the pending trip to the postseason will be their 19th in a row.

The last time they failed to make the playoffs, President Bill Clinton had just won a second term in the White House, Michael Jordan just turned in a valiant effort in what became known as “the Flu Game” and Anthony Davis was a four-year-old toddler whose destiny was still unknown.

Ironically, despite being the NBA’s model franchise, the Spurs always seem to fly under the radar.

That’s okay, though, they’ll just continue to show up when it counts—just like they have done for the past 19 years.