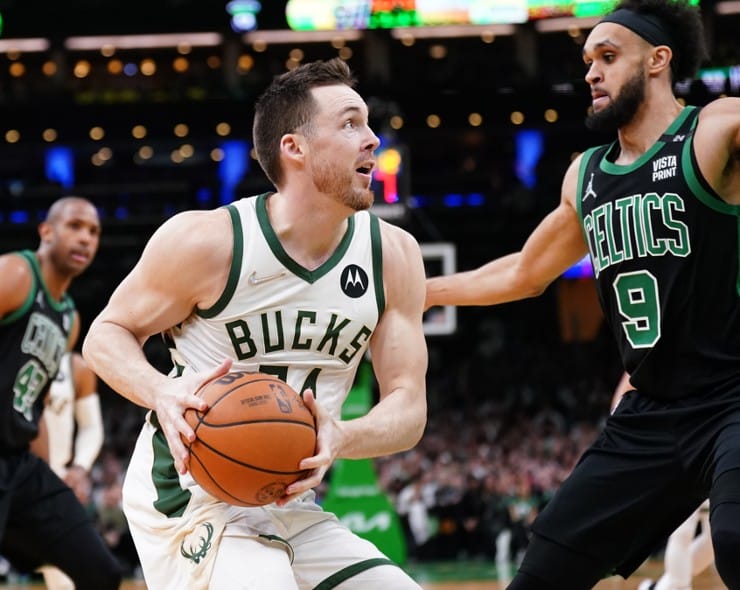 Pat Connaughton is exercising his player option with the Bucks for $5.7 million. This is not part of the two-year, $8.3 million deal he signed with the team on Nov. 23, 2020. Instead, this is part of a three-year deal the Bucks were forced to negotiate. In a total of 65 games played in the 2021-22 regular season, the guard averaged 9.9 points, 4.2 rebounds and 1.3 assists per game.

His scoring average last season was also the best of his NBA career. On Nov. 10, 2021, in the Bucks’ 112-100 win over the Knicks, the guard scored a season-high 23 points and a career-high seven 3-point shots. The eighth-year player also averaged 45.8% from the field and 39.5% from downtown. He ranked 17th in the league last season in true shooting percentage (62%) as well.

Would Connaughton receive more generous offers as a free agent? Yes, of course. His unselfish decision to take less money for the team is a plus. The Bucks and their fans are relieved that he’s staying put. On Aug. 2, 2021, teammate Bobby Portis signed a two-year, $9 million contract extension with the team. His player option for the 2022-23 season is $4,564,980. He has until next Wednesday to make a decision.

The guard has improved every season scoring-wise

Moreover, in February, Connaughton missed time after undergoing surgery on his right hand. But he still helped the Bucks to finish with a 51-31 (.622) record, ranking third overall in the Eastern Conference. His willingness to make a sacrifice for the better of the team is something he probably learned from teammate Jrue Holiday, who won the Twyman-Stokes Teammate of the Year (TSTY) award last season.

Then, during the first round of the 2022 NBA Playoffs, the guard scored 20 points in 23 minutes of action in Game 5 versus the Bulls. In the following round, Connaughton averaged 10.3 points, 4.6 rebounds and nearly 1.0 assist per game against the Celtics. At 6’5″ and about 210 lbs., he has proven his importance to the team during crunch time.

Offensively, the guard has improved every season of his NBA career. In the 2020-21 season, in 69 games played, Pat Connaughton averaged 6.8 points, 4.8 rebounds, 1.2 assists and almost 1.0 steal per game. He has come a long way since his days coming off the bench for the Trail Blazers. While some fans were expecting the Bucks to return to the finals this past season, it’s difficult for any team to make it back. The Warriors are the exception, not the norm.