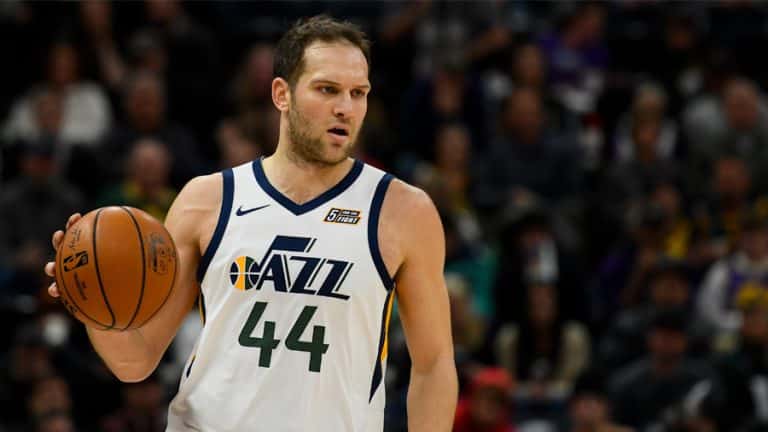 The Utah Jazz look to stop the bleeding after dropping their first two preseason matches as they host the New Orleans Pelicans on Monday at Vivint Smart Home Arena. BetOnline Odds are available below.

Bojan Bogdanovic participated in practice over the weekend after sustaining a sore shoulder. Bogdanovic has played an essential part in Jazz’s resurgence in the West over the last two seasons and there’s no doubt he will fill the same role this coming season.

The Pelicans made a couple of free-agency moves on Saturday, signing James Banks and Malcolm Hill to deals. New Orleans had to waive Zylan Cheatham and Jared Harper to make room for these players. Cheatham and Harper received two-way contracts from the Pels last season.

Zion Williamson, Brandon Ingram, and Jaxhon Hayes are all listed questionable for Monday’s tiff with the Jazz. Williamson is nursing a foot injury, while Ingram and Hayes are complaining about injuries in the knee and ankle, respectably.

Meanwhile, Rudy Gay will likely miss the rest of the preseason and several games at the start of the 2021-2022 NBA season since he is still recovering from heel surgery.

The New Orleans Pelicans split their first two preseason assignments with Williamson sitting on the sideline. New Orleans dropped a 117-114 loss to the Minnesota Timberwolves before crushing the Orlando Magic 104-86. Nickiel Alexander-Walker starred in the Pels’ last games, recording 19 points on 5-for-12 shooting and 5-for-9 from beyond the arc.

The Jazz absorbed back-to-back losses at the hands of the San Antonio Spurs 111-85 and Dallas Mavericks 111-101, but they are missing the service of three-time Defensive Player of the Year Rudy Gobert in these games. Despite the early hiccups, Utah remains poised to become one of the top contenders in the Western Conference. Jared Butler, a late second-round pick in the 2021 Draft, exploded for 22 points on a 9-for-18 shooting in a loss to the Mavs after he tallied 16 points vs. the Spurs.

The Jazz performed poorly against the spread in the last five games, settling with 1-4 ATS record. The Pelicans are outstanding in covering the spread with 8-4 ATS records over the 12 contents.

In 10 of their last 13 games, the Pelicans have gone under. They are expected to struggle offensively as long as Williamson and Ingram are out due to injuries. On the other hand, the Jazz are known to be a defense-focused team, yet they have talented offensive weapons on their roster, including Donovan Mitchell and Jordan Clarkson. With the over/under set at 222.5 points, it’s hard to bet on the Pelicans and the Jazz to combine for more than that points, especially in the preseason.

The Jazz are poised to win big at home, though it would be difficult to see the game go over 222.5 points. The Jazz are -7 favorites heading into the match at BetOnline.