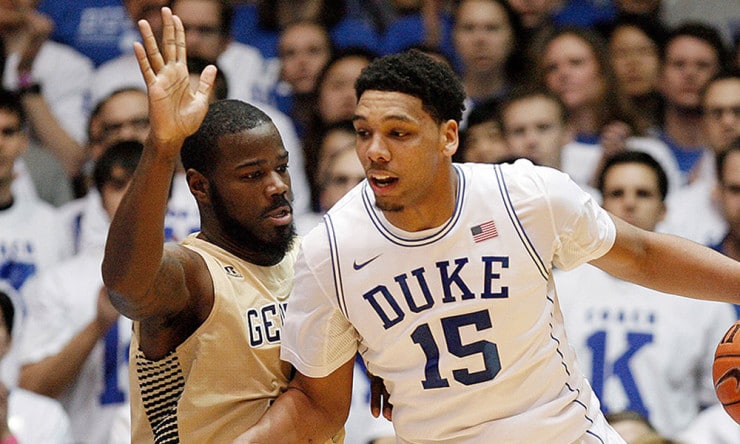 During a stretch from January 11-January 28, the Blue Devils went 3-3; as always during any Duke down spell, critics were quick to pounce and cast doubt on their national championship hopes. The dismissal of talented guard Rasheed Sulaimon right before a huge matchup against then-undefeated Virginia on January 31 turned the outlook into borderline disastrous, but the Blue Devils became the first team to beat them this season and have since looked every bit like the title contender they were billed to be during the preseason. That win against the Cavaliers was the start of an 11-game winning streak to close out the regular season, which included surviving a couple games without their star center Jahlil Okafor. Okafor is the premier low-post scorer in the country, averaging a team-high 17.6 points a game on an astonishing 66 percent shooting from the field. He became the first freshman in ACC history to win the conference’s Player of the Year award and is the kind of star who can carry a program to a national championship. He has plenty of help, though, with Quinn Cook having a career-year and fellow freshmen Justise Winslow and Tyus Jones playing well enough to be tabbed as future first-round picks in their own right. The 81.3 points the Blue Devils average a game is good for the third best mark in the country. This isn’t the best defensive team that Coach K has ever brought to the field, as the Blue Devils give up 65 a night. The common theme in their three regular season losses? Allowing over 75 points. The Blue Devils allowed North Carolina State to score 87, gave up 90 to Miami and 77 to Notre Dame. They’re 26-0 when holding their opponents to under 75, and just 3-3 when they don’t.

St. Francis (N.Y.) went into the Northeast Conference tournament as the favorites, but the Colonials beat them for the second time this season in the championship to clinch their first NCAA Tournament bid since 2010. They have three players in Rodney Pryor (15.2), Marcquise Reed (14.8) and Lucky Jones (14.3) who average at least 14 points. They go as those three do. The Colonials played the 219th most difficult schedule in the country, getting 11 of their 19 wins against teams outside of the top 200. In their two match ups against teams in the RPI top 25, they got blown out at North Carolina 103-59 and hung around close with Georgetown before ultimately falling 80-66. Their best win outside of conference play was at a neutral site against Louisiana Monroe. The Colonials were outrebounded on average by two a night, which spells trouble for them if they get matched up against a team with a strong frontline in the opening round. The Colonials also averaged 13.8 turnovers, among the highest of any team in the field. Against the level of competition they’ll be facing, those turnovers will lead to quick points, so they’ll have to really focus on doing a better job of taking care of the basketball than they did during the regular season.