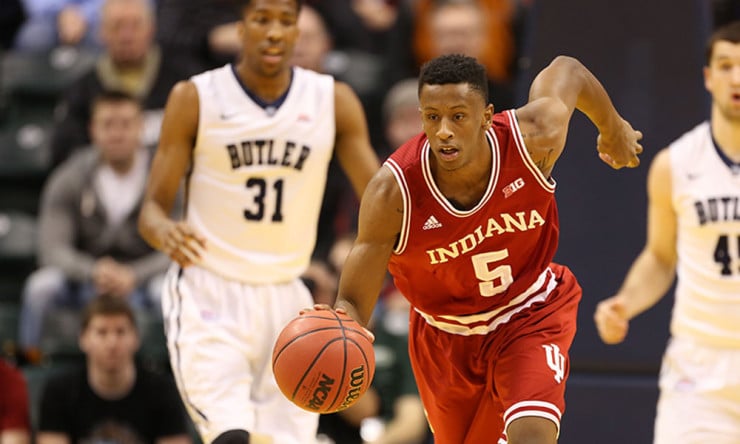 If anyone thought the Wichita State success of the last two years was a fluke, think again. The Shockers have followed up their Final Four run and last year’s undefeated regular season with a 26-3, 16-1 (conference) record to go along with a #11 national ranking. Thanks to a stifling defense (55.7 PPG) and an ultra efficient offense (0.954 PPP), the experienced WSU squad has managed to find relevance and looks to make another deep tourney run. The only concern has to be a 0-2 record vs. top 25 opponents and an uncharacteristic loss to a solid but not spectacular George Washington team. The keys to success are simple: Ron Baker (15.2 PPG, 4.5 RPG, 2.2 APG, 1.2 SPG) and Fred VanVleet (12.4 PPG, 4.3 RPG, 5.3 APG, 1.8 SPG). When they play well, the Shockers win (Ron Baker shot 3-16 from three in losses to GW and UNI). The duo plays heavy minutes (32.2 and 30.4 MPG) and staying out of foul trouble will be a key to any hopes of advancing past the first weekend. Baker’s story is well documented, from walk on to star and the next chapter almost certainly includes the 2015 NBA Draft. VanVleet can handle pressure, control the tempo and provides much needed leadership. Opposing teams will look take advantage of below average post defense (0.846 PPP) and hope to force Baker into a cold shooting night, but Wichita State has the experience to grind out victories.

The Hoosiers return to the tournament for the first time since 2013, and head coach Tom Crean’s seat has seen cooler days. Yes, there are a lot of programs out there that would be happy with a 20-win season, especially against the 34th most difficult schedule in the country. However, Indiana has higher expectations than that, and they especially expect to be better than seventh in the Big 10 as they were this year. They want to be contending for a national championship, and they haven’t consistently come close enough with Crean at the helm. A strong tournament run would go a long way in silencing his critics. Since Jared Jeffries led them to the national championship game in 2002, the Hoosiers haven’t been past the Sweet 16. Crean’s team doesn’t come into the tournament with much steam, losing four out of their last five and failing to win two consecutive games since January 18 and January 22. Guard play is critical in the tournament and in Yogi Ferrell, Crean does have one of the most dynamic playmakers in the field. He’s putting up 16.1 points, 3.3 rebounds and 4.9 assists this year and is definitely a guy to keep an eye on, as are James Blackmon Jr. and Troy Williams. The Hoosiers are a tough team to slow down offensively and they can really shoot the three, but their defense has been exposed throughout the year, like when Wisconsin, Louisville and Georgetown all dropped over 90 points on them. They’re not all of a sudden going to become a great defensive team, so being on top of their game offensively is a must.