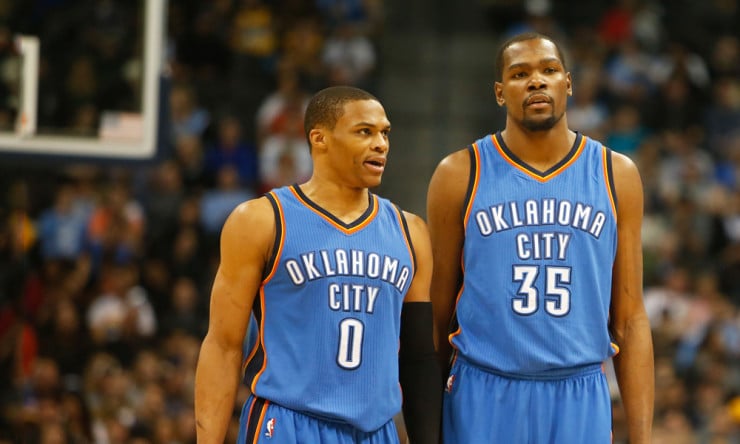 The Oklahoma City Thunder took care of business against the Dallas Mavericks in their first road game of the 2015-16 postseason by recapturing control and home court in the series with a 131-102 victory on Thursday night. Kevin Durant rebounded from the worst playoff performance of his career in Game 2 with a 34-point (11-25 from the field), seven-rebound effort and Russell Westbrook was his customarily dominant self (26 points, 15 assists) in the Thunder’s victory.

Another difference in the Game 3 thrashing was the production OKC received from the supporting cast, as Serge Ibaka (16 points, six rebounds, two blocks), Enes Kanter (21 points, eight rebounds) and Dion Waiters (19 points, four rebounds, three assists) were superb for the visiting Thunder. It’s one thing to face the Thunder when Durant and Westbrook are rolling, but they become deadly when at least one or two members of the supporting cast also find ways to have a positive impact on the flow of the game.

The Mavericks turned in another good effort and a balanced scoring attack with five players reaching double figures, but weren’t quite able to duplicate the defensive effort from the previous contest. OKC enjoyed a significant advantage from beyond the arc (15-27 from three-point range compared to just 6-23 from deep by Dallas) and outworked the Mavericks on the backboard by a 42-30 margin. J.J. Barea (groin) returned to action with 15 points and seven assists, and Raymond Felton turned in another strong performance with 18 points, four assists, three rebounds and four steals in the loss.

Game 4 of this series is Saturday night at 8 p.m. EST from Dallas once again. It will be a daunting task for the Mavericks, but they’ll probably need to put forth their best defensive effort of the series in order to have a chance to tie this series back up before heading back to Oklahoma City. If they can match the level of collective intensity they brought to Game 2, where they won the turnover battle, tracked down many of the loose balls and at least kept the rebound battle (58 to OKC’s 62) respectable, then they could continue to make the series interesting. Otherwise, OKC will likely be taking a commanding lead back to Chesapeake Energy Arena in Game 5.

Prediction: Dallas brings a great effort, but OKC finds away to take another one on the road and win Game 4.