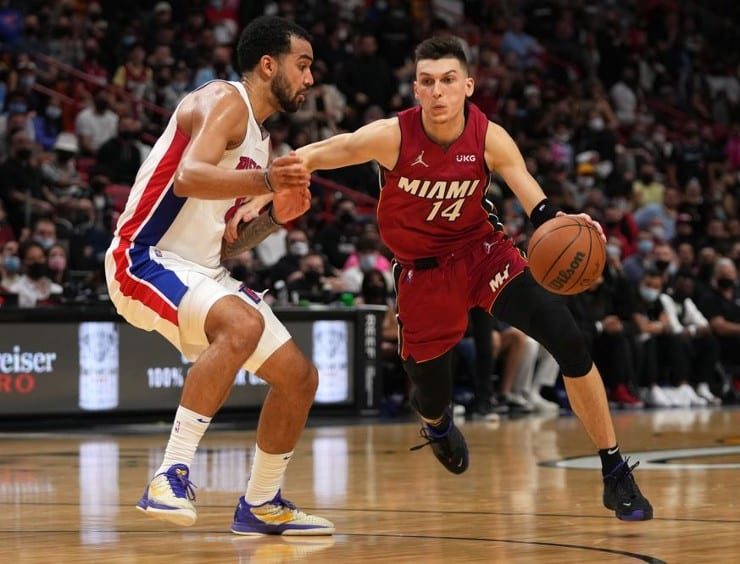 Miami Heat guard Tyler Herro is the reigning Sixth Man of the Year, and he’s also eligible for a contract extension this summer. Though, it appears G.M. Andy Elisburg is using Herro as trade bait.

The front office wants either Kevin Durant or Donovan Mitchell. However, for the Heat to acquire Durant or Mitchell in a trade, it would require Elisburg to gut his roster. So, why would Miami want to lose Herro?

According to Ira Winderman of the Sun-Sentinel, the Heat stalling on Herro’s new deal benefits the team strategically. This stems from NBA rules.

“Keep in mind that if the Heat wait on an extension, it means Tyler Herro remains trade eligible at any point during the season, potentially a chip to put in play at the February NBA trading deadline.”

“The risk is losing Tyler as a restricted free agent next summer,” continued Winderman. “But that also almost never happens, as evidenced this summer with the Suns and Deandre Ayton.”

“Either way, it appears it will be a decision that will come much closer to the Oct. 18 extension deadline. There simply is no urgency from the Heat’s perspective at the moment.”

Will the Heat offer Tyler Herro an extension before the 2022-23 season?

If the Heat offer Herro a contract extension right now, after he signs the offer, the guard would be untradable until January 15, 2023.

Furthermore, if the Durant-Mitchell trade talks dwindle before training camp, there’s a good chance the Heat will then offer Herro a fair deal.

But some NBA analysts think the third-year player isn’t worth a max contract. The Phoenix Suns were able to match the Indiana Pacers’ four-year, $132.9 million offer to Deandre Ayton.

While a multi-year deal worth over $130 million is a bit much for Herro, his value is at least $100 million, right? Jalen Brunson signed a four-year, $104 million contract with the New York Knicks.

Winderman expects the Heat to offer Herro a similar deal. And that is only if trade talks diminish. As long as the 22-year-old continues to play at a high level, it would be unwise for Elisburg to wait much longer on offering the guard his extension.

Once the damage is done, Tyler Herro could sign with some other contender in 2023. The last thing Heat coach Eric Spoelstra wants is a weakened backcourt.