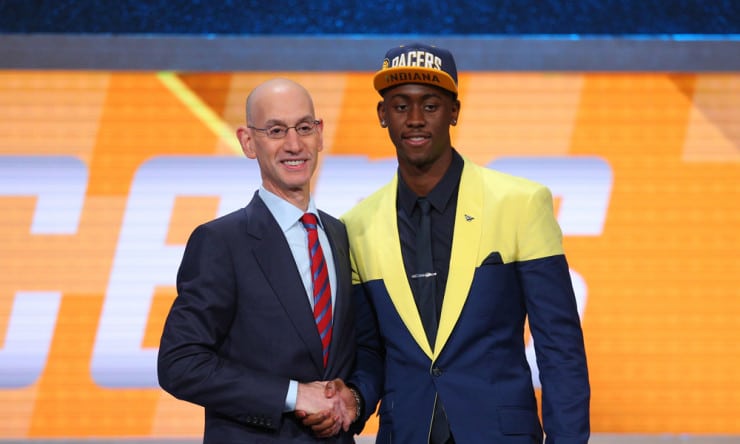 After attempting to obtain a draft pick in recent weeks, the Brooklyn Nets were able to acquire the 20th pick from the Indiana Pacers in exchange for forward Thaddeus Young.

The Nets used their newly-acquired first-round pick to select guard Caris LeVert from Michigan. Adding LeVert gives the Nets some more youth and allows the franchise to begin their rebuild under new general manager Sean Marks.

LeVert is coming off of two season-ending leg injuries. He missed the last 14 games of the season during his junior year with a broken left foot and then suffered another foot injury during his senior year. His injury history was expected to drop his stock a bit lower, but he still managed to be a top 20 pick.

The Nets have likely looked into his foot problems and have determined that they won’t be something that impacts his future. Injuries aside, LeVert possesses great height for a guard at 6’7. He was measured with a 6’10 wingspan at the draft combine last month.

In 14 games during his senior year, LeVert averaged 16.4 points, 5.4 rebounds and nearly five assists per game. In addition, he knocked down 45 percent of his shots from three-point range. He appeared in just 17 games during his junior year and averaged 14.6 points and shot 38 percent from behind the arc.

Brooklyn found themselves without a first-round draft pick this year after using it in the trade that saw them acquire Kevin Garnett and Paul Pierce from the Boston Celtics in 2013.

Parting ways with Young was a bit surprising as he was thought to be part of the Nets’ rebuilding plan moving forward, but the team ultimately decided to dump the $25 million owed to Young over the next two seasons in an attempt to create more cap flexibility and add younger talent.