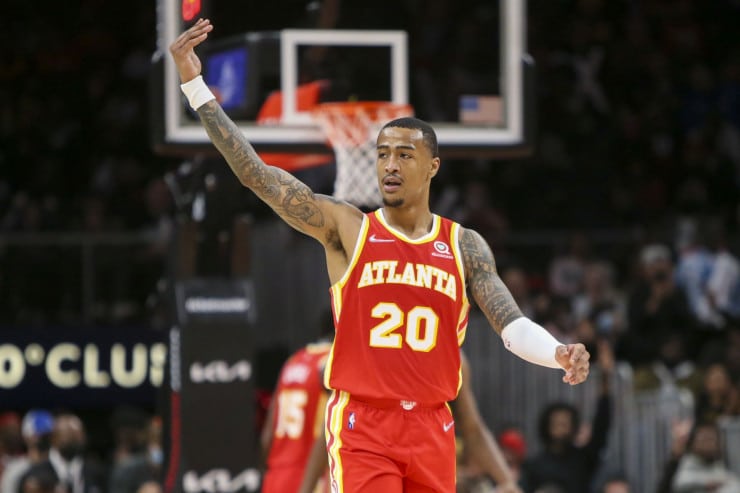 The Atlanta Hawks are 11-10 so far this season which is first in the Southeast Division. Trae Young and the Hawks are also eighth in the Eastern Conference and are 4-6 in their last 10 games. One player on the Hawks has been brought up in trade rumors and it might be close to the end for him in Atlanta. However, it may not be his fault completely.

Six-year pro John Collins is the player being brought up in trade rumors. He’s battled multiple injuries in his career so far and his numbers this year are the lowest they’ve been since his rookie season. Collins isn’t playing to his full potential, but he’s also not getting the production he was last season with Dejounte Murray on the team now.

NBA betting sites have the Hawks at (+5000) to win the Finals this season.

John Collins brought up in trade rumors with Atlanta

According to reports, the Utah Jazz are one team who have an interest in Collins.

“But what if Utah is no longer content with joining the race for prized prospect Victor Wembanyama? The Jazz’s interest in Hawks forward John Collins is real, league sources said, and would seem to indicate Utah considering how to add to this winning unit rather than subtract from it. Right now, the likelihood of Collins landing in Salt Lake City, though, seems low. Atlanta approached the Jazz about swapping Collins for Markkanen, sources said, which did not generate any traction.” – Bleacher Report’s Jake Fischer

It would be a real surprise for the Jazz to get rid of Markkenan as he’s been playing extremely dominant for Utah this season and has been their best player offensively.