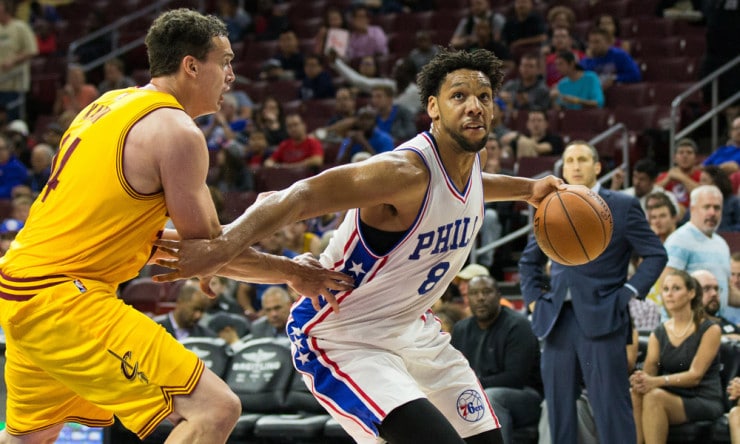 The ever-divisive ongoing rebuild in Philadelphia has, for better or worse, shined an unbalanced light on a few of the specific participants – whether willing or otherwise. Many people were involved in some way with the 76ers’ decision to undergo an intentional tanking project never before seen to this magnitude in North American professional sports, but the spotlight has generally featured only a small percentage of those mixed up in what’s been, at times, a painful ordeal.

From a player perspective, particularly during a 2015-16 season that threatened all-time levels of futility early in the year, the two main outlets for fan and media frustration have been blue chip big men Nerlens Noel and Jahlil Okafor. With fellow college standout Joel Embiid still on the sidelines and out of the spotlight, potential Euro transplant Dario Saric toiling half a world away and the rest of Philly’s roster inhabited mostly by placeholders and journeymen, Noel and Okafor are on the front lines daily.

Booker Has Been a Bright Spot for the Suns

Heading into the 2015-16 season, the Phoenix Suns were projected by many to compete for a playoff berth in the Western Conference. The team entered the season with a young core of players that many thought were set to turn the corner.

In addition to the promising core, the Suns made a couple of key offseason moves. First, they re-signed point guard Brandon Knight to a five-year contract after acquiring him at the trade deadline last season. Then, they signed free agent Tyson Chandler to a four-year deal.

Adding a veteran like Chandler was supposed to be the splashy move that Phoenix needed, as he was expected to mentor some of the team’s younger players. He was also viewed as perhaps the missing piece that could help solidify the defense and help the Suns return to the postseason.

Which NBA Players May Be Bought Out?

The NBA trade deadline is only a few hours away and, as is the case each year, there will be a number of players who won’t be moved even though their respective teams did everything to change their address.

This year will likely be no different and there are numerous individuals who be may be headed for a contract buyout if a trade can’t be made. Let’s evaluate a few guys in play, assuming no deal before the 3 p.m. ET deadline gets done.

Breaking Down the Deadline Deals

The NBA’s trade deadline has now passed and, unfortunately, it was somewhat anti-climactic. While last year featured a ton of trades and plenty of big-name players getting moved, that wasn’t the case this season. There wasn’t a single star traded this time around and most of the moves were pretty minor. Despite players like Dwight Howard, Al Horford, Kevin Love, Pau Gasol, Ryan Anderson and others being mentioned in trade rumors, none of those individuals were dealt.

With that said, there were still nine deals that got done and several notable players changed teams. Here’s a breakdown of each trade that went down on Thursday:

Boston Sitting Pretty Despite No Moves

Of all the teams expected to be active at the 2016 NBA trade deadline, the Boston Celtics came into the madness with the most to offer and the most to potentially gain. With players like Kevin Love, Al Horford and Dwight Howard all finding themselves churning through the rumor mill in connection with the Celtics, it certainly seemed like President of Basketball Operations Danny Ainge would have plenty of opportunities to do something splashy and turn a good 32-23 team into a squad on the brink of title contention.

But the Celtics didn’t do anything. Ainge stood pat on his assets, deciding instead to bank his myriad draft picks and look toward next summer when he will have a ton of cap space. At that point, he can sign a number of players since Boston could be an attractive situation for free agents.

The NBA’s trade deadline passed on Thursday, with a number of last minute trades slipping in under the wire.

The Los Angeles Clippers, Washington Wizards and Detroit Pistons each made deals to try to help their playoff fortunes. The Clippers added Jeff Green, the Wizards acquired Markieff Morris and the Pistons landed Tobias Harris, Donatas Motiejunas and Marcus Thornton.

Other teams made financially-motivated moves. By dumping the salaries of Channing Frye and Harris, the Magic opened up enough potential cap space to pursue two max free agents this summer.