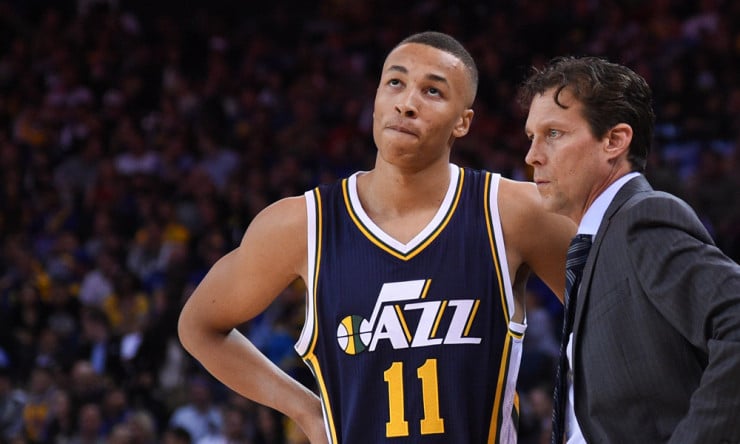 Since the early 1990s, particularly after NBA general managers had become fascinated with the likes of Arvydas Sabonis, Šarūnas Marčiulionis, Vlade Divac, and Dražen Petrović, it became evident that the game of basketball was one that could find gifted contributors outside of the United States of America.

Despite being sidelined after suffering an ankle injury, Exum has been a fixture with his Utah Jazz during summer league play. The belief that he can emerge as one of the NBA’s top international contributors first begins with him emerging as a leader for his Jazz and for the 20-year-old, amongst the summer league cast, he finds himself being looked upon for the wisdom that his experiences, thus far, have given him.

In an offseason full of turmoil and plenty of notable player movement, the Northwest division may end up with the largest year-to-year turnover of any from a wins and losses standpoint. The Portland Trail Blazers were briefly considered a dark horse title contender six months ago, but were ravaged, in turn, by injuries and the departure of 4/5ths of their core. The Oklahoma City Thunder missed the playoffs last year, but will be among the favorites to win the West assuming better health. The Nuggets are an indecipherable mess, a talented group with a coaching improvement on the way but tarnished by an awful culture. The Utah Jazz and Minnesota Timberwolves both have done very little to their exciting cores over the summer, but both could look to make big leaps in their win totals.

It’s still somewhat early as we are still several months away from the start of next season. However, with the 2015 NBA Draft behind us and over two weeks into free agency, we can now look to see which teams have gained the upper hand. Here’s a first pass at a bottom-to-top ranking of the division.

Orlando Magic forward Aaron Gordon recently underwent jaw surgery to repair an injury he reportedly sustained while roughhousing with his brother Drew, who played with the Philadelphia 76ers last year. Nobody really seems to know exactly what happened, but one thing is for sure: that’s a really dumb way to get injured.

It’s not the dumbest way an NBA player has ever been hurt though, as the following list proves. Here’s a look at some of the most ridiculous injuries in recent league history:

A funny thing happened this NBA offseason: Money didn’t play as big a factor as some would have thought.

Without question this was one of the biggest summer paydays in NBA history – more than $3 billion in new contract money was handed out – but as big as some of the deals were, more guys chose the opportunity to win more than the chance to get an extra contract year or an extra few million.

The poster child for “winning matters most” was David West, who opted out of a $12.6 million year with the Indiana Pacers, citing that he did not think the Pacers could really contend anymore and chose to sign a one-year veteran’s minimum deal worth $1.4 million with the San Antonio Spurs.

Jazz Are Hungry for Success

It’s been three seasons since the Utah Jazz last made the playoffs. Back then, the team was led in scoring by Al Jefferson and Paul Millsap. Gordon Hayward was in just his second NBA season.

Jefferson is now in Charlotte and Millsap is in Atlanta. Hayward remains on the roster, as does Derrick Favors and Alec Burks, but each has a much different job. With veteran leaders in Jefferson and Millsap on that playoff team, Hayward, Favors and Burks played a much smaller role. Now, the torch has been passed down to them to lead this young Jazz team back to glory.

Portis Wants to Win Games, Not Friends on the Court

Bobby Portis is clear about his priorities in the NBA. Helping the Chicago Bulls win games is one of them, winning over opponents is not.

The intense power forward made headlines during this year’s draft process when he explained he envisions his competitors slapping his mother to get into game mode. Once Portis takes the court, he’s ready for battle.

Even though he has achieved his goal of reaching the NBA, the 22nd overall pick isn’t letting up. Portis brought that drive to Summer League in Las Vegas where he attacked each of his games with a fervent focus.

One of the questions surrounding the San Antonio Spurs in recent years, outside of how long can Tim Duncan play at an elite level, was how would the team look when the current core group eventually retires? Sure, Kawhi Leonard is an emerging star, but the team also needed another dominant force in the lineup beside him.

The Spurs persuaded Aldridge to depart Portland in free agency this summer, which immediately put the franchise back into title contention coming off of a first-round playoff elimination.

Okafor May Be Sixers’ Centerpiece

The Philadelphia 76ers have been searching for a centerpiece to build around – after all, that’s a big part of their patient rebuilding plan – and they’re hoping that No. 3 overall pick Jahlil Okafor can be exactly that.

Okafor has experience being the focal point of a team. In high school, he was the nation’s top recruit. He averaged 24.1 points and 11.3 rebounds as a senior and led the Whitney Young Dolphins to an Illinois state championship, while also winning three gold medals for Team USA during high school.

In his lone collegiate season at Duke, Okafor averaged 17.3 points (shooting an incredible 66.4 percent from the field), 8.5 rebounds and 1.4 blocks and lived up to the lofty expectations that come with being a top recruit. He emerged as the star of the program and led the Blue Devils to the national championship.

West Should Be A Wild Ride, Once Again

We apologize to those who are tired of hearing about how much stronger the Western Conference playoff race is compared to that of the Eastern Conference, but the fact remains that teams attempting to represent the West will have yet another gauntlet to navigate throughout the 2015-16 regular season.