Connect with us
Home » news » Basketball Insiders Week In Review 76 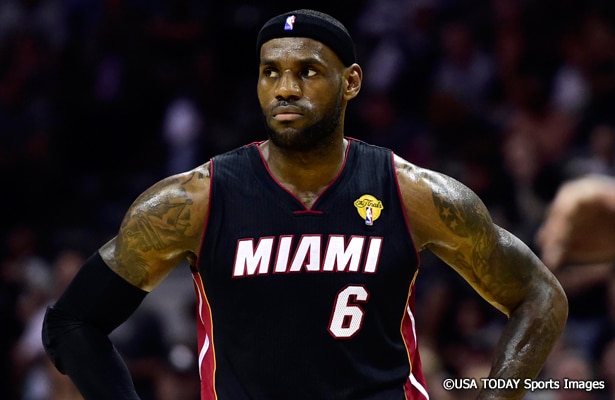 The big news heading into the last week before free agency kicks off is, of course, the expected opt-outs from the Miami HEAT’s three All-Stars. It’s amazing how one NBA Finals series can change the HEAT from the most dominant team on the face of the planet to an old team that needs to get more help for LeBron James, but that’s how the story has gone for the HEAT since their demise at the hands of the formerly “old” and “boring” San Antonio Spurs. Teams across the league are trying to angle their way into a conversation about one of the very few stars available in this summer’s free agent crop, but the bottom line is that there will ultimately be more cap space created than there are stars to use it up.

Entering the NBA draft last Thursday, it was not clear who the Jazz would ultimately select with the fifth overall pick. When their time to pick came, the Jazz chose Dante Exum from the Australian Institute of Sport, despite the fact that they acquired a talented point guard in last year’s draft in Burke. When asked about playing alongside Burke, Exum said that he knows it will take some give-and-take from both guards.

The Atlanta Hawks’ current streak of seven consecutive playoff appearances becomes even more impressive when you consider that it has remained intact despite numerous coaching changes, front office regime shifts and rotating leading men at the top of the lineup.

The upcoming 2014-15 campaign will be the third for president of basketball operations and general manager Danny Ferry at the helm of the franchise. One thing about Ferry’s tenure in Atlanta is becoming increasingly clear – the man can create cap room.

When Ferry was hired before the start of the 2013 season, he immediately (and some would say surprisingly) found takers for the contracts of Joe Johnson (Brooklyn) and Marvin Williams (Utah). The moves gave Atlanta plenty of future financial flexibility, while keeping the remaining core of talent in place to continue the playoff run.

Carmelo Anthony and the Knicks Need to Break Up

A few years ago, prior to his celebrated arrival, the city, the team, the owner and the fans all coveted the player.

The feeling was most certainly mutual. The player openly reciprocated their affection.

They wanted to unite, and were determined to find a way to make it happen.

The love affair actually began nearly three decades earlier. The player was born in Brooklyn and spent his adolescent years there. That’s where he first fell in love with the city’s game.

The player eventually moved away, spending his formative years in West Baltimore. As the player matured, his game developed. His name gained prominence, and his native city and the fans back home took notice. It seemed destined that they would someone day reunite.

July rolls around, the sun is scorching in many places other than just Phoenix and NBA front offices buzz more than Kemba Walker’s Charlotte Hornets.

It is free agency season in the Association, and while the common NBA fan is preparing for a Fourth of July Weekend consisting of charcoal, hamburgers and fireworks, most of the league’s free agents are looking forward toward cashing in some big checks.

The chosen few—LeBron James, Carmelo Anthony, Eric Bledsoe and perhaps even Kyle Lowry—have managed to play themselves into whopping paydays. But often, it is a clever signing of a fifth or sixth man that helps put a team over the top, or at least allow them to swim near the surface with the other elites in the NBA.

It has been a relatively quiet first day of free agency as the market waits for big fish like Carmelo Anthony and LeBron James to bite.  But the few deals that have been signed have shocked many observers in both salary and length.  Notably, 30-year-old Marcin Gortat agreed to return to the Washington Wizards for a reported five-year, $60 million pact, Jodie Meeks agreed to three years and nearly $19 million with the Detroit Pistons, and the Golden State Warriors reportedly agreed with Shaun Livingston on a three-year deal for their full mid-level exception, although the last year is only partially guaranteed.  This morning it was reported that restricted free agent Avery Bradley agreed to a four-year, $32 million deal to return to the Boston Celtics, and C.J. Miles agreed to four years, $18 million with the Indiana Pacers.

While these contracts are far above the market rate for last year, the rising cap this year, the number of teams hording cap space and the increased number of teams looking to compete this year has significantly inflated the market compared to the last few post-lockout years when the cap remained relatively flat.

The build up to NBA Free Agency is always followed by something of a letdown in the number of agreements that get reached early. This is not at all unusual. Since the new Collective Bargaining Agreement kicked in in 2011, there is an ever increasing amount of money becoming available each summer due to much shorter contracts. As a result players are hitting free agency faster and teams are clearing space faster, creating an environment of lots of cash and lots of players.

The one thing to keep in mind is that the lack of noise does not mean teams are not being active and aggressive in trying to get players in or get players committed.

Here are some of things we know today:

Moving Forward with No Guarantees

When their seasons end, it is common for NBA players to pack up their bags and head out for the summer. Some leave within days after their last game, others stay around until their children finish the school year. As many were departing the cities they play in to spend their offseasons elsewhere, Chris Babb did the opposite.

Instead of returning to his family’s home in the Dallas area, the sparingly-utilized Boston Celtics rookie with an unguaranteed contract decided to get his own apartment by the practice facility to spend his summer as close to the team as he could. Signing a new six-month lease in May is an uncommon decision, especially for someone who rarely saw the court, but one Babb believes will pay off in the long run in spite of the uncertainties surrounding his current situation.

With Avery Bradley agreeing to re-sign with the Boston Celtics and Patrick Patterson reportedly set to re-sign with the Toronto Raptors, some of the NBA’s notable restricted free agents are already off the market. Now, let’s take a look at the rest of the league’s restricted free agents. These are players who can sign an offer sheet with a new team, but whose original franchise has the opportunity to match and keep them in town.

Here’s a ranking of the restricted free agents in terms of their pecking order on the open market.

Plan B for Carmelo Anthony Suitors

The more we all as human beings sit and look at the numbers that have been placed in front of Carmelo Anthony over the course of the last week, the more we all start coming to the realization that it’s going to be really hard for him to pass up the max deal that Phil Jackson and the New York Knicks are reportedly very open to tendering him.

Assuming he does end up back in New York, there are going to be four very sad teams that must immediately change course and begin working on their Plan Bs. The following are the likely next steps for the Chicago Bulls, Dallas Mavericks, Houston Rockets and L.A. Lakers should they ultimately strike out on Anthony:

Elfrid Payton knew that something wasn’t right. NBA Commissioner Adam Silver had just announced that he had been drafted by the Philadelphia 76ers with the 10th overall pick in the 2014 NBA Draft, but 20 minutes had gone by since the selection and the team had yet to contact him. They hadn’t even worked him out during the pre-draft process, and a point guard seemed to be the last thing they needed with reigning Rookie of the Year Michael Carter-Williams on the roster. Payton was confused, but he was also thrilled that his NBA dream had become reality. He pulled the 76ers hat over his full head of hair and smiled for the cameras. He was whisked away to the interview room, where he answered questions about the fit in Philadelphia and what he thought about playing with fellow 76ers draft pick Joel Embiid.

Then, halfway through the press conference, Basketball Insiders informed Payton that he had been traded to the Orlando Magic for Dario Saric and two future draft picks. Upon hearing this information, Payton smiled. Suddenly, it all made sense. He had worked out for Orlando, and the Magic had fallen in love with him during the pre-draft process. They needed a starting point guard, and liked the idea of having a dominant defensive backcourt of Payton and Victor Oladipo. Philadelphia was a head-scratcher for Payton, but Orlando was a perfect landing spot and he couldn’t have been more excited.