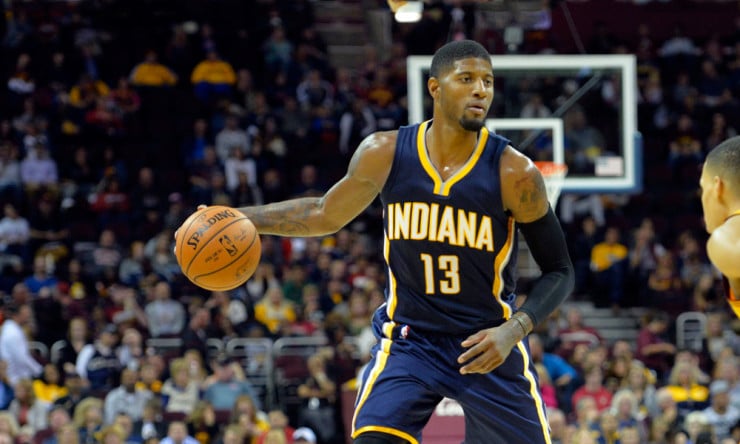 Who Will Challenge Out East?

The NBA offseason is where dreams either come true or shrivel up and die.

Free agents either sign huge contracts and give themselves and their loved ones the financial freedom they’ve dreamed about since they were young, or, conversely, find themselves continuing the check-to-check and living out of a suitcase lifestyle that NBA players detest.

Team executives usually find a way to fortify their squads and improve their odds of becoming a contender or see what little hope they had in the first place dashed and shattered worse than a car-wrecked windshield.

And, of course, the fans live and die with every move.

The Central Division isn’t going to be a very fun place for teams to live this year, but that’s sort of been the case for a few years now due in large part to the return of LeBron James and the team that now calls itself the defending NBA champion Cleveland Cavaliers.

The Indiana Pacers and Chicago Bulls are playoff contenders more often than not and still look talented enough to get back there in 2017, while upstart squads like the Detroit Pistons and Milwaukee Bucks both appear to be on the rise too. In fact, it wouldn’t be unreasonable to believe that all five of these teams could make the playoffs next spring.

It’s not unreasonable, but it is unlikely, especially with so many other talented organizations elsewhere in the Eastern Conference. Despite all that, it’s worth noting that there’s a very good chance that a lot of the teams in this Central Division preview will be very close in terms of record. Not much separates teams three through five, for example, but there’s got to be a pecking order even with all the ostensible parity. The following is a best preseason guess as to how things will round out in that division for 2016-2017:

This NBA offseason was among the busiest that we’ve seen in recent history. With the salary cap rising to a record $94 million, many different players were able to take advantage of the market and sign lucrative contracts.

While some teams still have a few roster spots to fill, the bulk of moves are behind us. Players have been drafted, some trades were made and a ton of free agents were signed. While some players decided to stay put in free agency, others wanted a change in scenery.

Of course, Kevin Durant headlined the list of players that opted to sign with a new team. Some of the players who changed teams will be given a fresh start and it could prove beneficial for their career. Whether it was to find an increased role, to compete for a championship or to leave a bad environment (or some combination of these reasons), some players will find themselves in a better situation next season.

Here is a look at five players who look to have better opportunities heading into the 2016-17 season:

It’s easy to look at the contracts some athletes sign and just shake your head in disgust. The numbers have gotten crazy and for some, the talent level of some players is hard to rationalize against their contract numbers.

While all of that may be true, especially to hard-working folks who work 9-to-5 jobs, there are some things about athlete contracts that are worth knowing.

How NBA Teams Will Benefit From Olympics

While winning the gold medal is obviously the top priority for Team USA, there’s an added benefit for the players who are participating: the opportunity to play with – and learn from – some of the best players in the word. Many young players have taken the next step in their development after playing for Team USA or participating in training camp and workouts as a member of the USA’s Select Team. Being immersed in film sessions, practices and game competition on a daily basis gives the young American players the chance to learn a lot and potentially model the processes that their fellow NBA players use to consistently perform at a high level. Throw in a Hall of Fame coaching staff that includes Mike Krzyzewski, Jim Boeheim and Tom Thibodeau among others, and it’s easy to see how Team USA members have the opportunity to gather key insights and make breakthroughs with their own individual performance heading into the 2016-17 NBA season.

Biggest X-Factors To Watch in the NBA

There will be plenty of great storylines to keep an eye on this upcoming NBA season, but today we’ll take a look at some of the players who could potentially be their team’s X-Factor in the 2016-17 campaign. While there are a ton of young talents like Devin Booker (Suns), D’Angelo Russell (Lakers) and Ben Simmons (Sixers) who will be eventually be asked to lead their respective teams in their ongoing rebuild efforts, today’s list features players who are either expected to take that next step forward, entering a new locker room or simply being asked to shoulder a larger portion of the basketball burden for teams with title or playoff aspirations.

Here are the players who could ultimately serve as lightning rods for their each of their respective teams:

The 2017 unrestricted free agency class will be headlined by Chris Paul and Stephen Curry, but notables such as Kevin Durant, Blake Griffin, Paul Millsap, Kyle Lowry and Gordon Hayward have player options and can enter the frenzy as well.

All of the above guys, barring injury, are going to command top dollar. Without question.

However, there will be a group of unexpected guys headed for a large payday as teams will look to find the next diamond in the rough. We saw it this past summer with players like Tyler Johnson, Allan Crabbe and Evan Turner commanding large deals on the open market.

Deadlines Ahead for Teams

August is traditionally a vacation month for NBA teams.

Outside of last week’s schedule release, a few late free agent signings and Team USA playing in Rio, the league is relatively quiet.

The NBA starts to rev up for the preseason in September, finalizing training camp rosters, with camps opening at end of the month (or start of October) followed by exhibition games.

Opening night will be Tuesday, October 25, although a few key milestone dates will happen before then.

The Western Conference could have much more relative parity than expected next season, and the Southwest Division is a perfect microcosm.

Each team in the division has a real case for offseason improvement, save perhaps the 67-win juggernaut that still retains two All-Stars on the court and Gregg Popovich behind the bench. Even the most pessimistic observer would have a hard time arguing more than a minor drop-off at the very worst for teams like New Orleans and Dallas, and it’s even tougher to look at Houston or especially Memphis and see anything but more talent and better roster fits. The division saw four teams in the playoffs last season; it’s no stretch to imagine a repeat.

In reality, health and a few bounces here or there could determine the eventual order in the Southwest. Let’s attempt to parse significant roster turnover and see which teams are best positioned to succeed.

The 2016-17 rookie class was pretty difficult to assess throughout the pre-draft process. If you checked out Basketball Insiders’ Consensus Mock Drafts in the weeks leading up to the draft, you likely noticed an unusually high number of players who climbed up and plummeted down the board – with a select few holding a consistently high position.

As it turned out, the draft ended up being even more unpredictable than most projected. The Boston Celtics are a good example of this as they took Jaylen Brown (No. 3), Guerschon Yabusele (16), Ante Zizic (23), Demetrius Jackson (45), Ben Bentil (51) and Abdel Nader (58), all while trying to put together a deal for a star player – most notably Jimmy Butler. A lot of teams went with the draft-and-stash strategy, so it will take more than a few years to really get a sense of which teams scored big in this draft and which teams struck out.

While the draft itself was difficult to project, we may have a better shot at predicting which rookies will have the biggest impact this upcoming season. With this mind, here is a list of rookies who seem poised to be the biggest day-one contributors from this class.