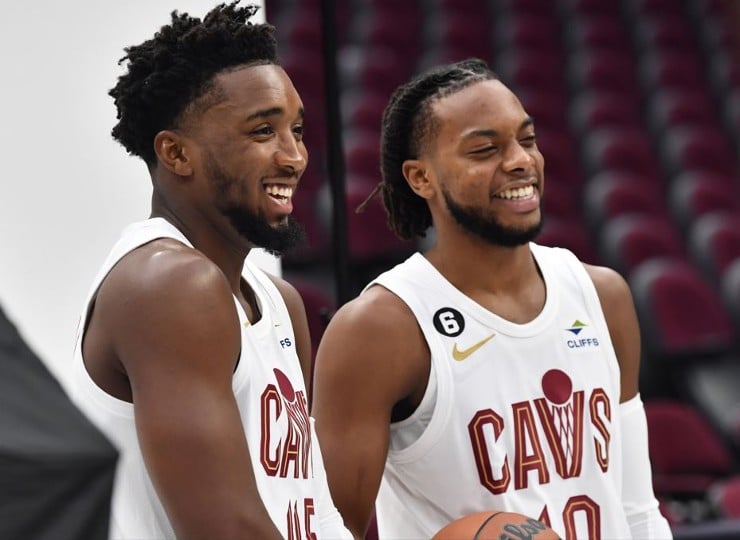 On Wednesday, Cleveland Cavaliers guard Darius Garland was seen back on the court practicing with the team. He is now wearing protective goggles.

Last Wednesday, in the Cavaliers’ 108-105 loss against the Toronto Raptors, Garland suffered a laceration on the inside of his left eyelid after Gary Trent Jr. poked him in the eye.

Based on some NBA betting sites, the Cavaliers have the 14th-best odds to win the championship this season. Multiple sportsbooks expect Cleveland to return to the playoffs.

Garland’s injury occurred with 3:56 left of the second quarter. The All-Star guard remained face down on the court for several minutes before walking off to the locker room with the medical staff.

“His head was clear and all those things, but he was cut and bleeding pretty bad from the inside of his eyelid,” said Cavaliers coach J.B. Bickerstaff after last week’s loss.

Cavaliers guard Darius Garland is participating in shootaround with team

Garland is scheduled to return on Friday, Oct. 28, when the Cavaliers play the Boston Celtics at TD Garden. For tonight’s matchup at home against the Orlando Magic, Donovan Mitchell might have to finish with a double-double for Cleveland to win.

“You miss an all-star,” continued Bickerstaff. “We stagger his and Donovan’s minutes so that one of those guys is always on the floor. We know through history what Garland is capable of and how he can carry an offense as well.”

On Sunday, Garland watched the Cavaliers’ home opener against the Washington Wizards. For their second win of the 2022-23 season, the Cavs defeated the Wizards 117-108 in overtime.

Garland getting some shooting work in here after shootaround. There’s a decent look at his protective eyewear at the end of the video. pic.twitter.com/YsKsApGRkc

Mitchell led the team in scoring with 37 points in 45 minutes played. He also accumulated 5 rebounds and 4 assists. He finished 12-of-29 from the floor and 5-of-12 from downtown.

Per the Cavaliers’ updated injury report, Dylan Windler (ankle) was listed as day-to-day. However, he has now been ruled out for tonight’s game against the Magic.

Not to mention, guard Ricky Rubio (knee) is out indefinitely. During Monday’s press conference, Rubio said that he could return to the court in December.

Nonetheless, Cavs fans should not hold their breath on Rubio returning this year. At least the team will get Darius Garland back soon. His protective goggles will help in the paint.