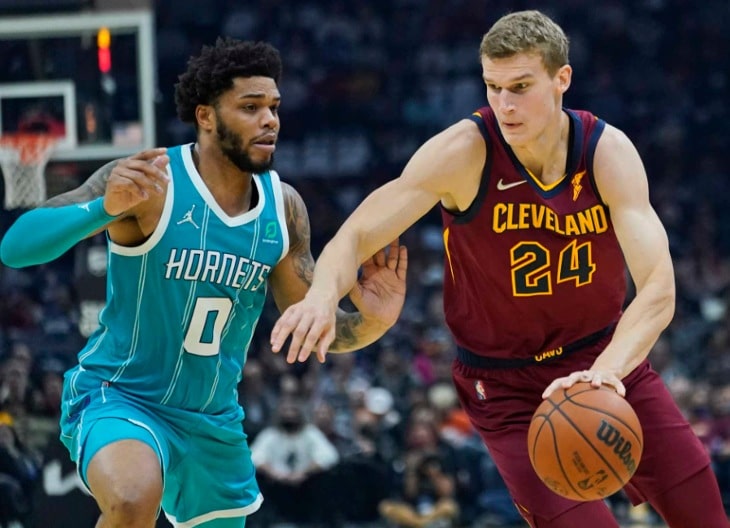 On Monday, Nov. 1, 2021, the Cleveland Cavaliers (3-4) are playing the Charlotte Hornets (5-2) at Spectrum Center. Thus far, the Cavs are 3-4 against the spread in the 2021-22 NBA regular season, whereas the Hornets are 5-2 against the spread. BetUS odds are featured below.

Referencing Land of Basketball statistics, based on 116 games played head-to-head all-time in the regular season, the Charlotte leads Cleveland 69 to 47. Leading into Monday night’s intraconference matchup, the Hornets are 2-1 in their previous three head-to-head meetings versus the Cavaliers. On Oct. 22, 2021, the last time these teams played one another, Charlotte won 123-112 on the road. However, in the past 10 meetings, the Hornets are 6-4 against the Cavaliers.

In the Hornets’ 125-113 home win on Sunday, head coach James Borrego earned his 100th career win with Charlotte. As stated below, he is the fifth head coach in franchise history to accumulate at least 100 career wins. On Aug. 9, 2021, Borrego agreed to a multi-year contract extension with the organization. He was first hired to coach the Hornets on May 10, 2018. To begin the 2021-22 NBA regular season, the team had their first 3-0 start in franchise history.

.@Hornets Head Coach James Borrego picks up his 100th career win with Charlotte. He is the fifth head coach in franchise history to reach 100 wins #AllFly

For the Cavs, small forward Isaac Okoro and point guard Kevin Pangos were downgraded to out for Monday night’s game. Okoro is still recovering from a lingering hamstring strain, while Pangos is out for undisclosed personal reasons.

On the other side, the Hornets have a clean bill of health. Aside from the Cavaliers’ inconsistencies, this explains why Charlotte is entering this matchup as a five-point favorite.

Back on the East Coast!

Moreover, on Saturday, in the Cavaliers’ 101-92 away loss versus the Suns, Cedi Osman led the team in scoring, ending his performance with 20 points in 30 minutes on the court. Lauri Markkanen, Darius Garland and Kevin Love each scored 11 points as well. Plus, Love had 12 rebounds and 2.0 assists in 20 minutes played. The Cavs were outscored 34 to 54 in the second and third quarters combined.

Upon further review of the box-score team statistics, the Cavaliers shot 36-for-91 (39.6%) from the field and 14-for-44 (31.8%) from three-point range. The season is still early, but fan expectations for Cleveland are low. Last season, through seven games, the Cavs were 4-3. Though, record-wise, there is not much of a difference between this team and last season’s Cavaliers. They are now 2-3 away.

Meanwhile, in the Hornets’ 114-99 loss against the Heat last Friday, forward Gordon Hayward scored a team-high 23 points in 37 minutes of action. Forward Miles Bridges accumulated 22 points, 8.0 rebounds and 1.0 assist in 37 minutes spent on the court. They allowed 113 points against the Trail Blazers, too. While the Hornets are 5-2, if this is how they’re going to play defensively throughout the course of the season, their only hope is to outscore their opponents.

Furthermore, the total for tonight’s Eastern Conference matchup is set at 221. According to the spread consensus, approximately 56% of bettors are expecting the Hornets to cover the spread. Pertaining to the total consensus, 53% of gamblers are predicting the total will go under 221. Up till now, the Hornets are 2-0 as selected favorites, 2-2 as underdogs and 1-1 ATS at home. The Cavaliers are 3-4 as underdogs and 3-2 ATS away this season.

Pick the Hornets to win, they will cover the spread and the total will go over 221. Charlotte is a five-point favorite with BetUS.