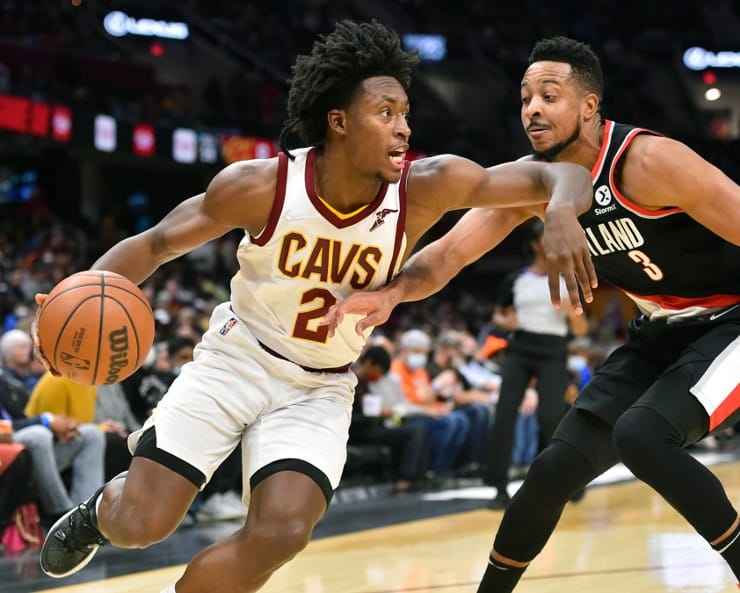 Collin Sexton is a restricted free agent with the Cavaliers, and the Pacers’ odds have increased by 15% to sign the guard; Collin Sexton next team odds are here. According to the BetOnline sportsbook, the Pacers now have the best odds (+200) of signing the fifth-year player.

For a reminder, these odds assume that Sexton decides to leave Cleveland. Anyway, the Pistons possess the second-best odds (+250) of signing the guard this offseason, followed by the Wizards (+350), Knicks (+425) and Mavericks (+500). Keep scrolling to view the full Collin Sexton next team odds list.

Collin Sexton Next Team Odds for the 2022-23 NBA season

Furthermore, Sexton only played 11 games of the 2021-22 season before tearing his left meniscus. Later in November last year, it was revealed to be a season-ending injury. The guard averaged 16 points, 3.3 rebounds and 2.1 assists per game in those 11 games.

When he played 60 games of the 2020-21 season, Sexton averaged a team-high 24.3 points per game with the Cavaliers. Regarding the table below, since the Cavs announced their qualifying offer to Sexton, the Pacers have jumped ahead of the Pistons in the race to sign him. Collin Sexton next team odds are below.

Will Collin Sexton re-sign with the Cavaliers?

Collin Sexton is arguably the best guard on the Cavaliers when he’s healthy. His statistics prove it. In his rookie 2018-19 season, he became the first player in NBA history to average at least 16 points per game, while playing a minimum of 2,000 minutes, having less than three turnovers and shooting over 40% from 3-point range. On Jan. 20, 2021, the player scored a career-high 42 points in the Cavs’ 147-135 double-overtime win versus the Nets.

If Sexton is seeking a long-term contract, he will have to look elsewhere. Before the 2021-22 season, the Cavs were unable to reach an agreement with their star guard. During Sexton’s absence last season, teammate Darius Garland averaged 21.7 points, 3.3 rebounds and 8.6 assists per game. He finished with a field goal shooting percentage of 46.2%, and he averaged 38.3% from downtown.

The Pacers are the most likely landing spot outside of Cleveland

While the Pacers are not in desperate need of another guard, backcourt depth is vital. Last season, the team finished 25-57 (.305), ranking 13th overall in the Eastern Conference. The health uncertainties of both Ricky Rubio and T.J. McConnell would lead to G.M. Chad Buchanen pulling the trigger on Sexton. And Malcolm Brogdon could help fit him into the team’s system.

In the 2022 NBA Draft, the Pacers selected Bennedict Mathurin, Andrew Nembhard and Kendall Brown. Of course, Mathurin won Pac-12 Player of the Year at Arizona. As a Wildcat, he averaged 17.7 points, 5.6 rebounds and 2.5 assists per game. It will be interesting to see how coach Rick Carlisle’s staff develops these young players. The Pacers’ odds of signing Sexton were partially based on this information above.

Additionally, before last season’s trade deadline, the team sent Justin Holiday, Jeremy Lamb, Domantas Sabonis and a 2023 second-round draft pick to the Kings for Tyrese Haliburton, Buddy Hield and Tristan Thompson. Again, while the Pacers don’t really need Collin Sexton, this team is his most likely destination if he decides to leave the Cavaliers.