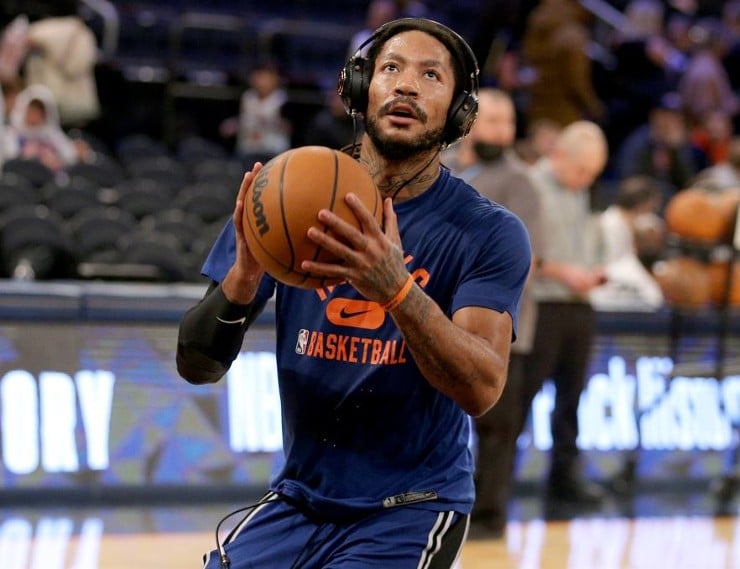 The New York Knicks are 9-9 this season after their 129-119 win on the road Monday vs the Oklahoma City Thunder. Besides a group of three to five players, the Knicks have been struggling to find consistent scoring this season. One of those struggling players is former NBA MVP, Derrick Rose. His name has been circulating in trade rumors and a “surprise” team has emerged with interest in Rose.

He missed a good portion of last season for the Knicks, only appearing in 26 with just four starts. Rose said in the offseason that it was a priority of his to stay healthy this season and he’s done that so far, missing just one game. The Knicks seem to have moved on from Rose as they signed Jalen Brunson in the offseason and he’s been a key contributor to their season. It’s possible that he could find himself traded to his sixth NBA team.

The Knicks have shown a willingness to discuss Derrick Rose and Immanuel Quickley in trade talks, per @ShamsCharania pic.twitter.com/1bvLH84LNb

The NBA veteran is averaging just (13.2) points per game this season which would be a career-low if his numbers stay at this rate. An Eastern Conference executive says a “surprise” team has showed up in trade talks, and it seems to be the Sacramento Kings.

“The Knicks have shown a willingness to discuss Derrick Rose and Immanuel Quickley in trade talks, league sources say, as a way to sort out the team’s glut at the guard position over the course of the season,” – Shams Charania

“And there will be surprise buyers at the trade deadline, maybe a team like Sacramento, a team that could use a veteran off the bench,” – undisclosed NBA Eastern Conference Executive

Rose is averaging just (13.2) points, (1.8) rebounds, and (2.1) assists this season. The Kings are 10-6 this season and could use a veteran PG like Rose off the bench. He may not be as consisntet as he once was, but he’s still a solid NBA player who can give a team solid minutes off the bench and help run the offense when the second unit is on the field.