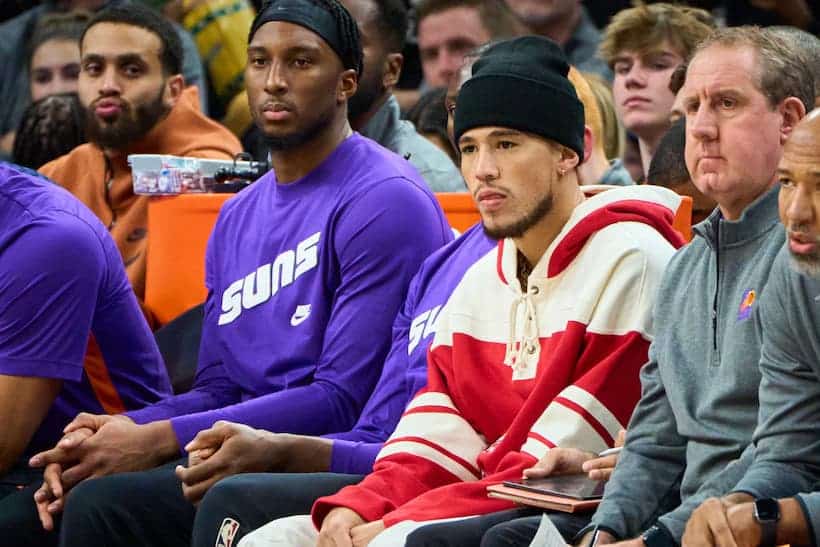 The Phoenix Suns have struggled in the month of December going 5-8 so far. Phoenix is also 4-6 in their last ten games and got even more bad news today. They announced that three-time all-star SG Devin Booker reinjured his groin on Christmas Day vs the Nuggets. He’s expected to miss about a month with the injury.

Losing Booker for a month is going to hurt the Suns in a large way on offense. He leads the team with (27.1) points per game this season and the next closest is Deandre Ayton with (17.7) per. Booker was also playing the second-most minutes per game of any Suns player besides Mikal Bridges. Role players and the teams other stars are going to need to step up and make an impact if they want to stay a float while Booker is out.

NBA betting sites have the Suns at (+1200) to win the Finals this season.

Devin Booker out for at least a month with groin injury

This season, the Suns are 2-6 in games that Devin Booker has not played in. Their offense is 9.6 points per 100 possessions worse than when he does play. Booker elevates the team when he is on the court and they mightily struggle without him when he is out. A concerning issue for the Suns. He tried playing through the injury on Christmas Day, but only played four minutes in that game.

Phoenix released this statement about his injury.

“Further evaluation has confirmed that Devin Booker has sustained a left groin strain. He will be re-evaluated in four weeks.” – Phoenix Suns

The Suns have battled some injuries this season already, but losing their best player is a blow to the season. Booker and his team sit at second in the Pacific Division and fifth in the Western Conference. Between the fifth and the ninth seeds in the West, there is only a 1.5 game separation. The West is full of competition this season and the Suns will likely fall in their position now that Booker is out.