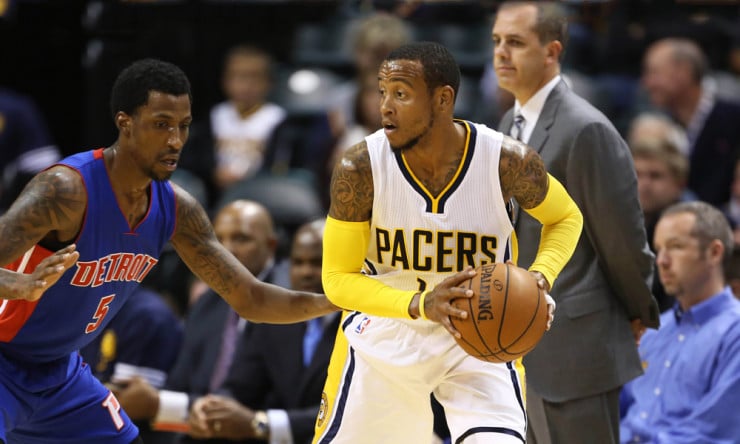 Each Wednesday, we’re helping you set your DraftKings lineups. The idea behind these articles is to highlight some cheap players that figure to perform well given their upcoming matchup. With 10 games set to tip off tonight, you’ll have plenty of options when building your rosters.

Having these lower-priced players on your squad will help you go after the top guys like Stephen Curry, Paul George, John Wall and others. These players listed below will all cost you less than $6,000.

If you haven’t done so already, be sure to enter our DraftKings league before 7 p.m. ET tonight. It is $3.65 to play and it has a $25,000 first-place prize. Here are six cheap players to keep an eye on tonight:

After having a very successful opening month of the season for New Orleans, Smith was moved to the bench once the Pelicans’ started getting players back from injury. After averaging 12.4 points, 8.4 assists and 4.5 rebounds in November, Smith’s production fell to just 6.1 points, 2.7 assists and 2.2 rebounds per game in December. He eventually fell out of the rotation, and was subsequently dealt to Philadelphia.

Since arriving to the 76ers, Smith has already earned two starts and is averaging 18 points, eight assists, 2.5 rebounds and 1.5 steals. He’s coming off of a 22-point, 11-assist, three-rebound and two-steal performance on Monday against the Utah Jazz, which was good for 45.3 fantasy points. It’s highly likely that Smith’s value will continue to rise as he plays more for Philadelphia, so jump on him while he’s still relatively cheap.

Ellis has been extremely hot over the past week or so. He’s turned in three-straight outings with at least 33 fantasy points and is averaging 23 points over that stretch. He’s shooting 54 percent from the field in those three games and 42 percent from three-point range.

Ellis has always been a player known to shoot at will, which is always good news for fantasy owners. In this case, it’s great that he’s averaging 16 attempts in the past week and that he’s knocking down a good percentage of those shots. It’s highly recommended to ride with Ellis until he cools off.

Fournier should be back on your DraftKings radar after going through a slump earlier this month. During a seven-game stretch at the beginning of December, Fournier averaged just seven points per game on 31 percent shooting from the field. Since that stretch, he’s turned in five consecutive outings with at least 26.8 fantasy points.

Fournier is playing with the same confidence we saw from him earlier this season when he was averaging around 17 points per game. He’s shooting much better, and has become extremely clutch for the Magic in big-time moments this season. Orlando is squaring off against a Brooklyn Nets team that ranks 25th in defense, so look for Fournier to continue his hot streak.

Noel had shown signs of inconsistent play over the course of the first month of the season, but seems to have figured things out a little bit. He’s turned in only one performance below 20 fantasy points and has averaged 28 fantasy points per game during the rest of December’s games. Okafor is being listed as questionable for tonight’s game, but Noel should still be worth a spot in your lineup even if Okafor does play.

Pachulia has been perhaps one of our favorite players to go with. He’s a guy that will contribute a solid 28 points or so to your lineup, and he’s shown that he’s capable of putting together a couple of 30+ point performances as well.

He’s playing pretty well as of late, as he’s turned in back-to-back 34 fantasy point outings. Pachulia is tied for fifth in the league in double-doubles, and is a prime candidate to earn those bonus points DraftKings hands out for double-doubles. There are only a few top options available tonight at center, so Pachulia could be a guy to target if you don’t want to overpay for a player like Pau Gasol or DeAndre Jordan.

After undergoing surgery over the offseason, it seems as though Parsons is as healthy as he’s been in quite some time. His minutes were fairly limited over the course of the first month or so, but it seems like he’s getting the green light to play more as he’s averaging 35 minutes over his last three games. It’s no coincidence that he’s averaging 33 fantasy points over that stretch.

Head coach Rick Carlisle recently moved Parsons back to the starting lineup, so that should be another great sign for fantasy owners. He’s another player whose price tag will likely rise the more he plays, so take advantage while you can.