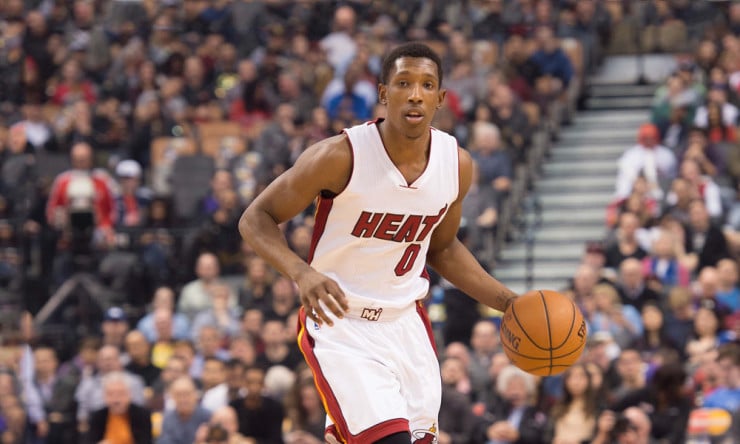 Wednesday in the NBA is typically one of the busiest nights of the week as most teams are in action. There are nine games set to tip off tonight, leaving you with plenty of options when building your DraftKings lineups.

The key to winning in DraftKings is having some cheaper players on your rosters who will perform well and allow you to afford players like Stephen Curry, Hassan Whiteside and Kawhi Leonard among others. We’re here to help you set your lineups by highlighting several players who seem poised to do well given their recent success or upcoming matchup.

It seems as though just about any player you can get your hands on from the Pelicans could be a safe bet. The team announced on Tuesday that Jrue Holiday and Alonzo Gee will miss the rest of the season, which leaves the team with seven players on the injured reserve out for the rest of the year.

Douglas comes in as a solid option for you tonight and he won’t break your budget. In his increased role, he’s become a very reliable fantasy option as he’s scored at least 20 fantasy points in 10 out of his last 11 outings. If you’re looking for a cheap option at point guard, Douglas could be your guy.

Richardson has benefited from an increased role with the team in recent weeks. His minutes per game have increased from 15.7 in January to a season-high 29.1 minutes per game in March. He’s averaging 12.8 points, 2.6 rebounds and 2.1 assists during the month of March.

He earned his second start of the season for Miami on Monday against the Brooklyn Nets in place of a sick Goran Dragic. Richardson would be in line to earn the start again tonight against the Los Angeles Lakers if Dragic can’t go, but Richardson should still be a great option for you even if Dragic does play. Miami has Dragic listed as questionable for tonight’s game, so keep an eye on his status closer to tip off.

With only a couple of the top small forwards in action tonight, Teletovic could be an option for you if you want to go cheaper here in order to save of your money for some other players. Teletovic and the Suns face off against a Milwaukee Bucks team that ranks 29th against opposing small forwards.

He’s been a reliable option over the past week or so as he’s turned in five-straight outings with at least 20 fantasy points. During that stretch, Teletovic has averaged 15 points and 5.2 rebounds for the Suns.

Green is another guy to target tonight on a very favorable matchup against a Denver Nuggets team that ranks 28th against opposing power forwards. Green has proven that he can contribute big games, as he’s turned in some performances with over 20 points for the Grizzlies.

There are a lot of the top power forwards in action tonight, so Green may be a guy you want to put in your forward or utility slots. The Grizzlies have been decimated by injuries this season so Green will have plenty of opportunities during games to contribute.

Valanciunas has put together a solid week of performances as he’s scored at least 20 fantasy points in four-straight games. He’s a prime candidate to earn the bonus points DraftKings hands out for double-doubles as he’s recorded 19 double-doubles this season.

Valanciunas faces a great matchup tonight as the Atlanta Hawks are the fourth-worst team in the league against opposing centers. He could be a great option for your team as a utility player as well.

If you took our advice on Augustin last week, he turned in a solid outing for you. Last week against the Philadelphia 76ers, Augustin recorded 22 fantasy points after having nine points, five assists, two assists and two steals for the Nuggets.

After that outing, he turned in performances with 39.8 and 41.5 fantasy points. If you are in need of a cheap utility guy, Augustin could be your guy since he’s been playing so well as of late.

We encourage you to give these players a look as you build your starting lineups for tonight. Here are two contests you can enter tonight: