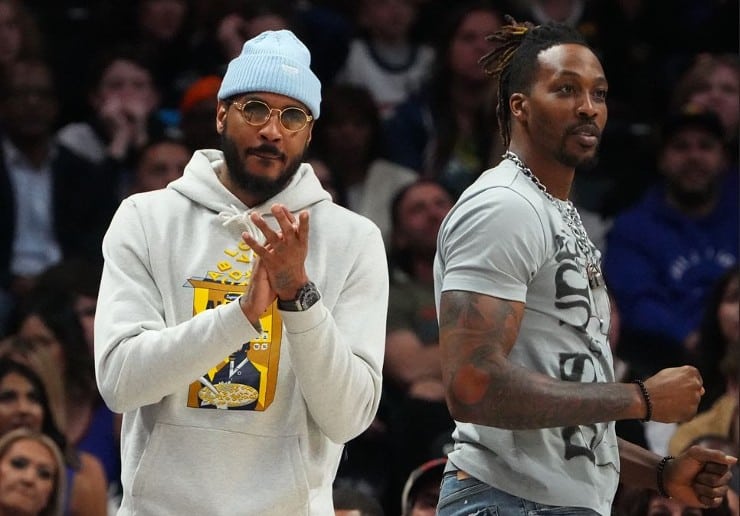 Former Los Angeles Lakers stars Dwight Howard and Carmelo Anthony have been in contact with the Brooklyn Nets. Two weeks into the 2022-23 season, both players remain unsigned.

On the “Club Shay Shay” podcast with Shannon Sharpe, Howard discussed the conversation he had with Brooklyn’s front office. In the YouTube video below, the conversation takes place at the 26:15 mark.

Per multiple NBA betting sites, the Nets have the seventh-best odds to win the championship in 2023. A few sportsbooks show higher odds than the Dallas Mavericks and Philadelphia 76ers.

“This time around, I asked to come to Brooklyn,” said Dwight Howard. “I talked to them. They say they need a big that could shoot. And I’m like, ‘Well, y’all just had a big that can shoot.’

So, it’s I don’t know. I don’t understand it, you know. I felt like that would have been a great pickup, a big that could protect the rim, play pick-and-roll defense, and rebound.

The pick and roll with KD [Kevin Durant], Kyrie, and Ben Simmons… I felt like that would have been lethal with me in it because I’m gonna get — I know for sure — KD and Kyrie are going to get the most wide-open shots.”

Throughout his 18-year career, the three-time Defensive Player of the Year made only 22 shots from outside the arc. Sharpe also asked the center which teams were on his trade list while with the Orlando Magic in 2012.

“L.A. was not on my list at all,” said Dwight Howard. “I wanted to go to Brooklyn. I didn’t want to go to L.A. because I felt like I wanted to go somewhere who’s never won or they haven’t had as many championships.

And I wanted to help that team grow and be a champion. I wanted to play against Kobe because they just beat us, right? So, why would I want to go to L.A.”

Of course, the Nets also had dialogue with Carmelo Anthony. While the 10-time All-Star never played for Brooklyn, he did play seven seasons with the New York Knicks.

In 69 appearances with the Lakers last season, Anthony averaged 13.3 points, 4.2 rebounds, and 1 assist. The guard logged only 26 minutes per game, but his impact was still noticeable.

Aside from age, it’s unexplainable why Anthony and Dwight Howard remain unsigned this season. Anthony can still contribute off the bench for any championship contender.

And Howard is capable of protecting the rim and acquiring rebounds as well. Limiting minutes is the key. During the offseason, the Boston Celtics were reportedly interested in signing one of these two players. But a deal never manifested.