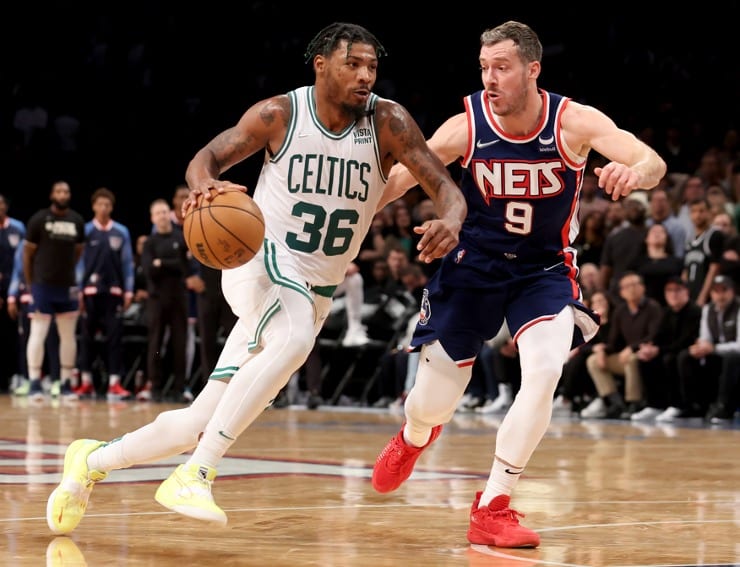 Goran Dragic wanted to sign with the Bulls last year, and now he’s thrilled to be away from Kevin Durant, Kyrie Irving and the rest of the Nets. The 14-year veteran signed a one-year, $2.9 million contract with the Bulls earlier this month.

When asked about his former Nets teammates, he said, “It was quite hard, because it wasn’t about the team, but more about individual performances.” Team chemistry is vital for any playoff contender.

The Nets had a lot of talent on their roster in the 2021-22 NBA season, but it appeared that none of the top players connected. Just look at the Lakers from last season. They had Anthony Davis, LeBron James and the front office traded for Russell Westbrook in the offseason. Though, the team failed to qualify for the play-in tournament.

Goran Dragic struggled to connect with Durant and Irving

Last season, he averaged 7.5 points, 3.1 rebounds and 4.1 assists per game in only 21 games played. On Nov. 28, the guard announced the was stepping away from the Raptors because of personal reasons.

Dragić says he already wanted to sign with Chicago last year, but things went different & he signed with the Nets: “It is what it is”.

He said he played with KD and Kyrie, and added: “It was quite hard, because it wasn’t about the team, but more about individual performances.” pic.twitter.com/FtMiJ7GIhC

During the first round of the 2022 NBA Playoffs, Dragic scored 14 points in Game 1 against the Celtics. Then, he ended his Game 2 outing with 18 points and 4 rebounds. In Game 4, he put up 10 points as well.

Although Irving and Durant helped carry the load for Brooklyn in the postseason, there is clear tension between Kyrie and the front office. Despite playing with the Nets just for a couple of months, it appears that Goran Dragic wanted out at the right time. If the Nets aren’t serious about winning a championship, why stay?

Durant asked for a trade out of Brooklyn, and Dragic turned down the Mavericks

Furthermore, shortly after NBA free agency began, Durant asked for a trade from the Nets. Per multiple sources, the two-time Finals MVP was disappointed in how the Nets treated Irving this past season. Now, Durant’s two preferred teams are the Heat and Suns. At this point, it appears that neither team has been able to negotiate a fair trade with Nets G.M. Sean Marks.

Having said all of this, Dragic is also very picky at his age. He wants less drama and more playing time. The guard even turned down an offer from the Mavericks. He said, “We were in talks with Dallas. They made an offer, but I decided not to take it. They wanted me to play one game and then sit for the next five. I know I can easily play 20 minutes per game. I’m, not ready to retire and just sit on the bench in a cheerleading role.” Other articles related to Goran Dragic are on the main page.