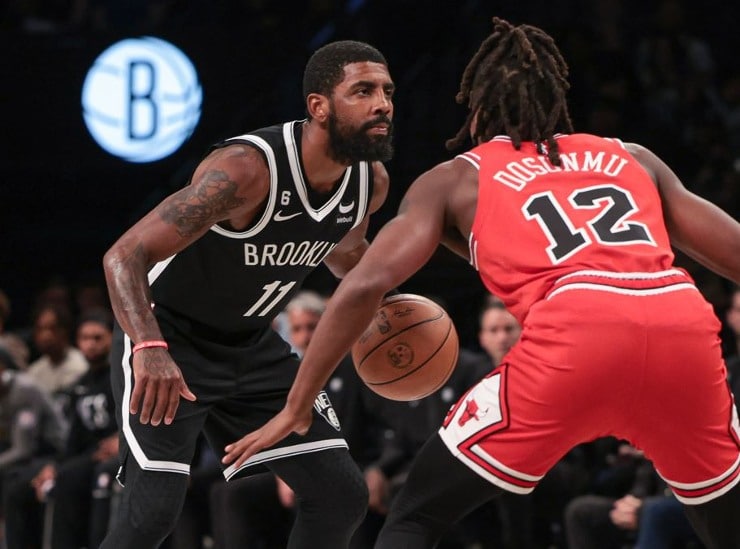 Brooklyn Nets all-star SG Kyrie Irving was issued a suspension by his team for some controversial links he reposted on his social media accounts regarding anti-Semitism. He missed eight consecutive games and was back for his seventh game last night vs Washington after missing that time due to the suspension. Irving spoke about how he was thrown off his rhythm in the time he missed.

Nets head coach Jacque Vaughn has been forced to play Kevin Durant for extra minutes in the past month. Irving missed eight games in a row and Ben Simmons has been in and out of the lineup with lingering knee injuries. Simmons is expected to miss at least three games, one of them being last night’s win vs the Wizards, 113-107. Brooklyn has gotten more wins when KD plays extended minutes, so Kyrie missing that time ironically made the Nets slightly better.

"I came into the season with so many hours put into my craft and being very sharp. For me to be removed like that, my rhythm of course was thrown off"

Kyrie Irving talks about getting back into game shape and aiming to shoot efficiently after coming back from his suspension: pic.twitter.com/sVwS87Hfjk

Kyrie Irving speaks on how the suspension threw off his rhythm

Nets superstar Kyrie Irving spoke about how he worked long hours in the offseason on his craft and that the suspension didn’t help as he was removed from the team.

” For me to be removed like that, my rhythm of course was thrown off,”… “I mean, I didn’t play for 14 days or something like that. I had to work myself back into rhythm.” – Kyrie Irving

Those were his comments after the Nets win last night vs Washington that gave Brooklyn their first winning record of the season at 12-11. Irving dropped 27 points in that game. He’s has 20 or more points in six of his seven games since returning from suspension.

Kevin Durant was forced to play extra minutes when Irving was out, and this equated to more wins for Brooklyn. The Nets had a 10-6 record in November and went from 12th to 8th in the Eastern Conference. At 34, playing Durant in these types of minutes is not something the Nets want to be doing long-term, and Jacque Vaughn knows that.

“It’s not ideal. While we’re in win-now mode, win today’s game, we are behind the scenes talking about what the stretch looks like beyond tomorrow and beyond the next day. So it is on our minds,” – Jacque Vaughn

"Ideally he wouldn't play this amount of minutes this early, for sure" pic.twitter.com/bMYycN9wxL