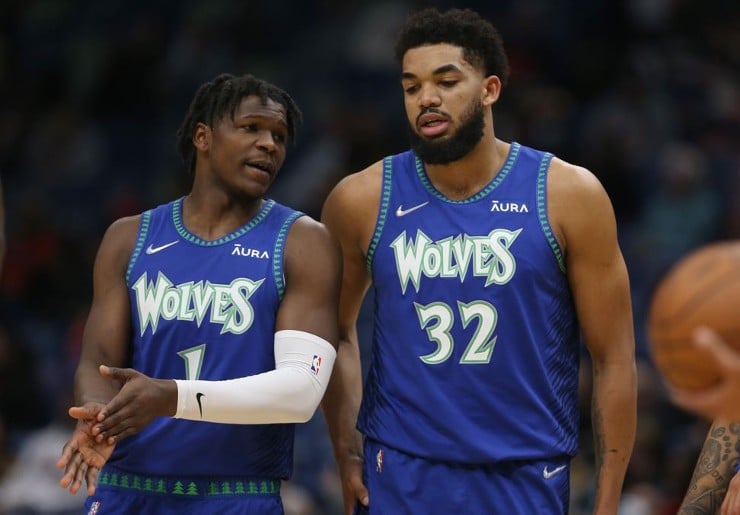 Minnesota Timberwolves center Karl-Anthony Towns would love to win a championship this season, and he believes it can happen if he can get Anthony Edwards to stop eating Popeyes. Towns wants a healthier team.

On Monday night, following the Timberwolves’ 115-106 loss against the San Antonio Spurs, the three-time All-Star was asked by reporters how he thinks he can improve Edwards as a player.

According to a few NBA betting sites, the Timberwolves have the 13th-best odds to win the championship in 2023. Though, some sportsbooks are showing higher odds at the moment.

“Maybe I could do a better job of teaching him how to take care of his body,” said Karl-Anthony Towns. “You know, diet and everything so.”

“I know y’all think it’s funny when he’s up here talking about Popeyes and all that s—t. That doesn’t make me happy to hear.”

Towns led the Timberwolves in scoring and boards with 27 points and 11 rebounds. He shot 9-of-17 from the floor and 2-of-6 from downtown in 39 minutes of action.

Edwards finished his night with 9 points, 10 rebounds, and 2 assists in 35 minutes played. His shooting was dreadful. The guard ended his performance 3-of-15 from the field and 1-of-8 from 3-point range.

“We’re high-level athletes, so I got work — I got work to do,” continued Karl-Anthony Towns. “But it also falls on me too, you know. It’s all a cliché, everyone wants to take the blame. It’s all of us. We’re a team.”

While the center’s Popeyes comment sounds comical, he meant it. Karl-Anthony Towns is striving to maintain a healthy lifestyle. In April 2020, his mother and six other family members passed away due to complications of COVID-19.

Through four games this season, Towns is averaging 20.3 points, 8.3 rebounds, and 4.8 assists. With Rudy Gobert in Minnesota now, the 26-year-old can relax during games throughout the course of the season. Adding the three-time NBA Defensive Player of the Year will benefit the Timberwolves come playoff time.

However, Towns wants to see the backcourt improve, especially Edwards. In 31 minutes as a starter, D’Angelo Russell played great against San Antonio, amassing 25 points, 5 boards, 7 assists, 2 steals, and 1 block. Off the bench, Jaylen Nowell contributed 13 points and 9 rebounds in 26 minutes.