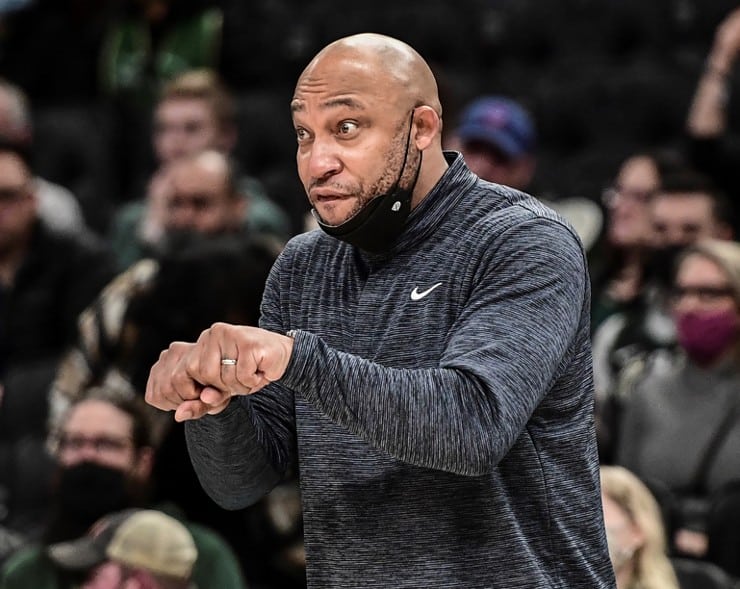 On Friday, the Los Angeles Lakers officially named Darvin Ham head coach. General manager Rob Pelinka released a statement: “When someone begins his NBA coaching career at the G League level and goes all the way through playing an integral role on the front bench of an NBA championship team, it really speaks to a certain strength of character.”

Furthermore, Ham is the 28th head coach in the Lakers franchise history. “Our players and fans will immediately identify with Darvin’s no-nonsense and hard-working approach, which we feel will bring toughness and a competitive edge to all we do,” Pelinka continued.

"Our players and fans will immediately identify with Darvin’s no-nonsense and hard-working approach, which we feel will bring toughness and a competitive edge to all we do." – Rob Pelinkahttps://t.co/aUZEkCf6Vk

Additionally, Darwin Ham began his coaching career as an assistant for the Albuquerque Thunderbirds from 2008 to 2010. The Thunderbirds were a team in the NBA Development League, which is now known as the NBA G League. They now play in Ohio as the Cleveland Charge.

Next, he served as head coach of the New Mexico Thunderbirds for the 2010-11 season. Nonetheless, Ham has no experience as an NBA head coach. Although he won a ring as an assistant coach with the Bucks in the 2021 NBA Finals, Ham is unproven when calling the shots.

Darvin Ham has the potential to become a great coach

For the 2007-08 season, Ham played for the Albuquerque Thunderbirds and Austin Toros of the NBA Development League.

Ham earned a couple of interesting nicknames over the course of his playing career. While with the Bucks, fans referred to him as “Ham Sammich” and “Dunkin Darvin.” Not to mention, as an assistant coach for the Lakers, he enjoyed working with Kobe Bryant. Then again, who wouldn’t?

Moreover, the Saginaw, Michigan native attended Otero Junior College from 1992 to 1993. Also, he played for Texas Tech from 1993 to 1996. In 90 games played with Texas Tech, Ham averaged 8.1 points, 5.1 rebounds and 1.0 assist per game. His son, Darvin Ham Jr., is currently an assistant men’s basketball coach for Northwood University.