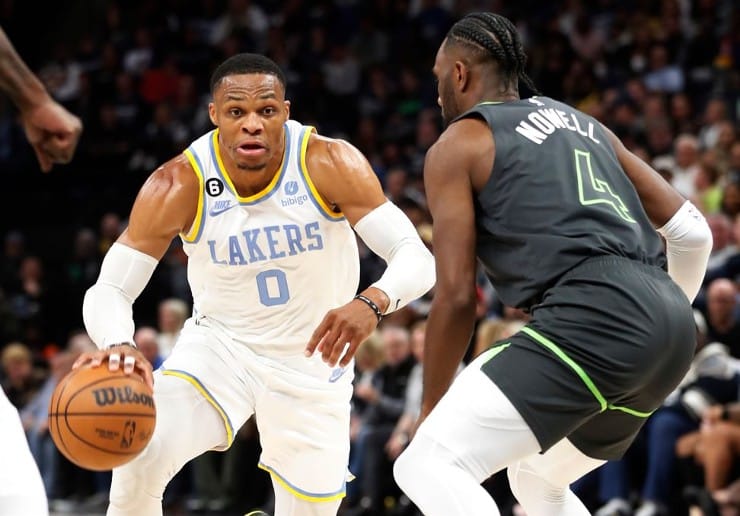 The Los Angeles Lakers finally snapped their five-game losing skid. They did so in impressive fashion defeating the Denver Nuggets 121-110. What makes this first win of the season even more impressive was the fact that they won over a hot team. They also shot extremely well from the field, something the team has massively struggled with to begin the year. For the first time this season, there were more bright spots than sad spots for the Los Angeles Lakers. Many other role players also stepped up to the task in this big home win.

Notable Lakers of the Night

LeBron James and Anthony Davis did their thing combining for 49 points and 21 rebounds. Even Russell Westbrook was a positive as he shot 50.0 percent from the field and even 50.0 percent from beyond the arc. A welcome sight for the Lakers, especially if he is going to start embracing a second-unit role. However, the unsung heroes of the game were the Lakers role players who arguably sealed the game at the end of the third quarter and start of the fourth quarter.

The player of the night for the Lakers was Lonnie Walker. Walker went on a tear in the third quarter and could not miss, no matter what shot he attempted. Walker finished the night with a stat-line of 18 points, five rebounds, and a scorching 60.0 percent from three-point territory. Austin Reaves also had some big moments in Los Angeles’ first win of the year. He hit timely three-pointers and came away with a box plus/minus of +15, tied for second best in this category behind Westbrook’s +18. The Los Angeles Lakers have looking for answers all year. Tonight, they finally got some and will be looking to use this momentum as a spring-board going forward.

Notable Nuggets of the Night

Despite the loss, the Denver Nuggets still had some positives. They were simply up against a desperate team while on the road and looked tired. You could tell exhaustion was setting in as many of shots were short in the second-half. Regardless, Denver still had a few players shine in the loss to the Lakers. Nikola Jokic came away with 23 points, 14 rebounds, and six assists. Another welcome sight for Nuggets fans was Jamal Murray getting back to form and hitting difficult shots he had become accustomed to before his ACL injury a couple seasons ago. He finished the night with 21 points, five assists, and a three-point shooting percentage of 42.9 percent.

It is also worth noting that the Nuggets’ second-unit was without their best playmaker in Bones Hyland tonight. Ish Smith also left the game dealing a blow to Denver’s depth. Head coach, Michael Malone had this to say about Hyland’s absence:

Malone also touched on the Lakers’ hot shooting from the field. He was very succinct and left it at this:

“We let guys get comfortable.”

The Nuggets will look to bounce back against the Thunder this coming Thursday while the Lakers will be back in action Wednesday against the Pelicans.