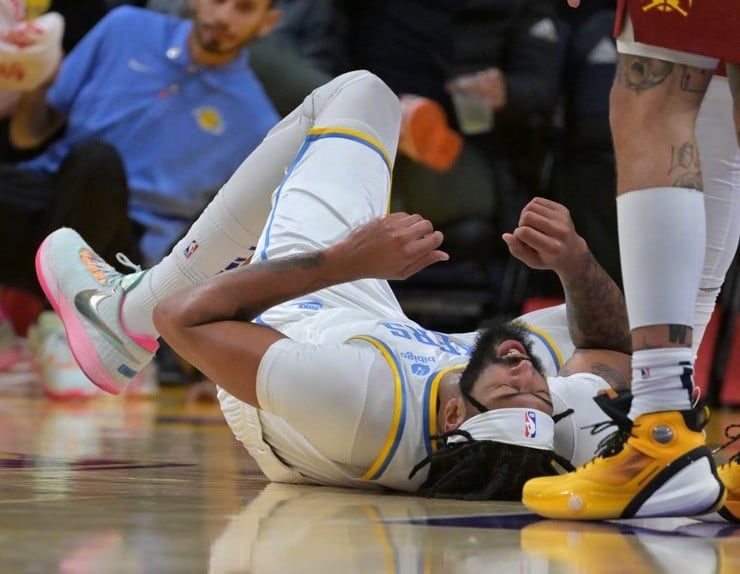 The LA Lakers are always going to be at the center of attention while LeBron James is on the team. Media and fans always have something to say about them regardless of their record on the season. It gets even worse when they expect the team to be a playoff contender and they aren’t even top ten in the Western Conference. It’s been a tough season for the Lakers at 13-17. They are 5-5 in their last ten games and superstar Anthony Davis got injured vs the Denver Nuggets on Friday night with a right foot injury.

If the rumors are true, it could be a devastating blow to the Lakers season. Initially NBA insider Shams Charania said that Davis is expected to miss at least a month with this right foot injury. Now, there’s a fear that he may actually miss two-to-three months and it would be hard for LA to recover from that with the way their season has played out so far. Lakers fans will be hoping to hear the best possible news in the near future about his foot injury.

Some on the Lakers side of things fear that the injury could sideline Davis for 2-3 months. pic.twitter.com/rMSHiBCUvD

Of the Lakers 30 games this season, Davis played in 25 of them and he was on a serious tear. Davis still leads the Lakers in points (27.4), rebounds (12.1), steals (1.3), and blocks (2.1) per game. He was also playing the second-most minutes per game (33.4) of any Laker this season. His head coach Darvin Ham moved Davis to the center position this season an it’s worked out well for the team. Ham had this to say about his eight-time all-stars injury.

“The first priority is to take care of his health,”… “To hell with what people have to say. … We have a phenomenal medical staff of really, really brilliant people within the organization who make sure he has the best possible care, and once we find out what’s going on, we’ll act accordingly. The season is fairly early, and he just has to take care of his business starting with, first and foremost, getting back healthy.” -Darvin Ham

With Davis missing at least a month for the Lakers, LeBron James is going to have to step and and carry the team as much as he can and it’s not getting easier for him as he get’s older. There’s not as much talent on the team as James has had in the past. Other like Russell Westbrook and Austin Reaves are going to be called upon to try and make an impact as well. The Lakers are hoping for the best possible news with Davis’ injury moving forward.