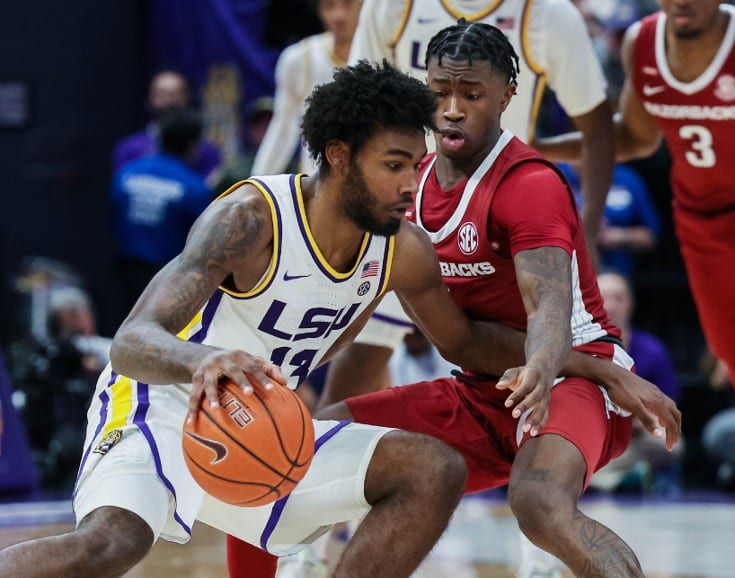 Will JD Notae and the Razorbacks obtain their fifth consecutive win? The senior guard is averaging 19 points per game this season. Along with the starting lineups, our top NCAA picks and betting trends are viewable below.

All LSU vs Arkansas betting odds can be found at BetOnline

Heading into tonight’s SEC rematch, the unranked LSU Tigers are attempting to win their third road game of the season. They are coming off a 75-55 home win over the Missouri Tigers ⁠— played last Saturday. In their 20-point blowout victory, Tari Eason led his team in points and rebounds; he accumulated 18 points and 6.0 rebounds in 20 minutes of play.

In the second half, LSU outscored them 45-31. LSU has won five of its previous 10 games. Plus, the Tigers are 7-1 ATS in their past eight contests played in the month of March. With this win at home, the team is 2-7 away, 15-2 at home and 4-5 ATS on the road this season. NCAA picks are below.

'22 Arkansas signee Barry Dunning (@BarryDunning6) getting ready to lead his team in the Alabama Class 6A State Semifinals! #wps https://t.co/YNZ132cS11

Furthermore, on Saturday, in the No. 14 Arkansas Razorbacks’ upset home win over the No. 7 Kentucky Wildcats, guard JD Notae scored a team-high 30 points in 38 minutes of action. Forward Jaylin Williams also finished his outing with a double-double. He piled on 16 points, 12 rebounds and 2.0 assists in 32 minutes played.

Referencing ESPN’s Basketball Power Index, the Razorbacks have a 57.% chance of winning.

Arkansas has won nine of its past 10 contests. As stated above, they are on a four-game winning streak Their last loss was on Feb. 12, when Alabama defeated them 68-67 on the road. The Razorbacks have only one loss at home all season. They are 16-1 at home, 5-3 away and 10-6-1 ATS at home this season.

Before wagering, viewers should skim through other head-to-head meetings. In the last three matchups, the Razorbacks are 2-1 against the Tigers. On Jan. 15, the first time these teams faced off during this regular season, LSU won 78-71 on the road. LSU vs Arkansas picks are below.

In other words, the Razorbacks will win, they will cover the spread and the total will go over 141.5. Arkansas has a highly-favorable chance of winning on their home court. For March Madness, if you have never placed a bet on a basketball game, you should read our handicap betting guide. Fresh NCAA picks are on the main page.