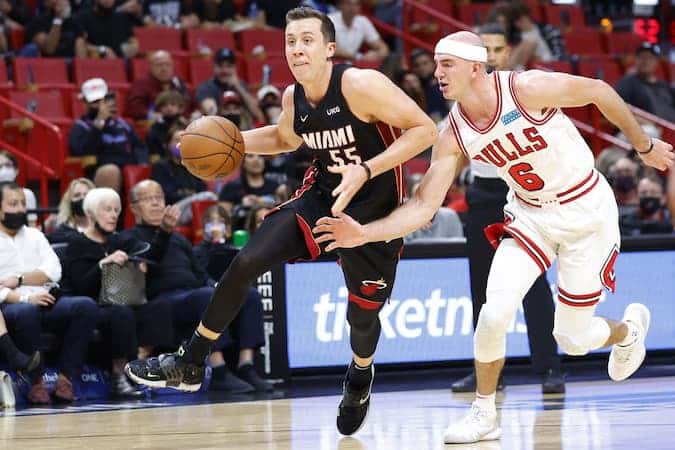 After four long months, the NBA regular season returns this week, and Miami Heat get their campaign underway with a visit of the Chicago Bulls. It tips off at 7:30 pm ET Wednesday evening, and it should be a cracker.

We’re getting ready for the game by offering up some of our top picks and predictions as well as taking a look at the latest odds.

The Chicago Bulls will travel to Miami for their opening game of the new NBA season against the Miami Heat, scheduled to take place at the FTX Arena at 7:30 PM EST. Last season, the Bulls finished 6th in the Eastern Conference with a record of 46-36, but were eliminated in the 2nd round of the play-offs by the Milwaukee Bucks in the first round. The Heat had a much better campaign, with a record of 53-29, eventually going on to finish first, and they reached the Eastern Conference finals, where they lost to the Boston Celtics in seven games.

Over the off-season, Miami lost P.J. Tucker to the Philadelphia 76ers in free agency, and re-signed Victor Oladipo, Caleb Martin and Dewayne Dedmon, and drafted Nikola Jovic. Many pundits do think that Miami won’t be as good as they were last season as their roster hasn’t really upgraded, where others have.

As for the Bulls, they have a lot to improve on this season after that disappointing early exit in the play-offs, and some believe that they’re already in a better position going into the season after key players have recovered from injuries.

How To Bet Claim $1000 Nets vs Pelicans Free Bets

Ahead of the opening week of the NBA, new customers to BetOnline can redeem $1000 worth of free bets – see below as to how to redeem yours

Our NBA expert has put together his three best Heat vs Bulls predictions and betting picks. You can back these NBA betting picks with FREE BETS by signing up with BetOnline through the links below.

Going off of last seasons performances, Miami obviously went further in the play-offs and looked a much better team than Chicago, so already that points to a Heat win on opening night. Also, the last time the two met was back in April this year, in the NBA regular season, and Miami managed to win by a score of 127 points against the 109 of the Bulls, showing that in recent times they’ve been the better franchise.

Back Miami Heat Moneyline @ – 250 With BetOnline

Tyler Herro is one of the key players in Miami, and the reigning Sixth Man of the Year recently signed a four-year, $130 million contract extension with the Heat, so it’s clear to see how important he is for the team.

Our second pick is for Herro to surpass 20.5 points, and last season, he averaged 20.7 points, nearly four more per game than any other reserve in the league, so it’s certainly a good selection to have.

Bam Adebayo is arguably one of the most important players for Miami Heat, and last season he averaged 19.1 points, and 10.1 rebounds, despite only taking 13 shots a game. And he was criticized for playing too passive on offense, however it wasn’t the case as the stats don’t lie.

Adebayo’s versatility was what helped Miami win games last season, and we’re almost certain he’ll live up to his hype once again this campaign.

Back Bam Adebayo Over 9.5 Rebounds @ -114 With BetOnline
Join our Telegram channel for our exclusive free betting tips, picks and offers.