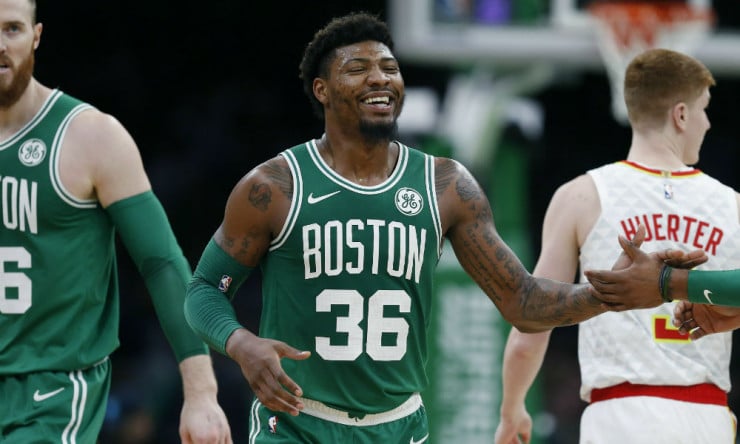 It’s been an incredible start to the season for the Boston Celtics. The team is 21-6 so far, a league best record at this point. On Saturday night, Boston still couldn’t seem to get over the hump of beating the Golden State Warriors, losing 123-107. Jayson Tatum finished the game with 18 points and went 2-9 from deep. The splash brothers were on fire in that game. Curry had 32 points and Klay Thompson had 34, combining for 10 three-pointers. Boston’s Marcus Smart had some interesting things to say about Curry after the game.

Months after the NBA Finals, Marcus Smart hasn’t forgot about Steph Curry and his teams loss. It’s never easy getting over a loss in a championship series, especially when it goes to six or seven games and you fall just short. That’s what happened to Smart and the Celtics last season. Curry won Finals MVP and he light up the Celtics every night, averaging (37.6) points per game in the 2022 NBA Finals.

As reigning DPOY, Marcus Smart has built a reputation of being one of the most versatile defenders in the league, even as a guard. Star players like Steph Curry like to challenge those types of players and give them their best performance. Both teams wanted to win that matchup on Saturday night. Boston were eager for revenge after the Warriors ended their season in game six of the Finals and the Warriors wanted to prove that they are still the better team in that matchup.

Smart mentioned what he thought of Curry in a workout over the summer and had this to say.

“I was thinking about him all summer when I was going through my workouts. I was thinking about what I have to do against him. And that’s good. It just gives me more ways, more things to add to my game on both ends — defensively and offensively — when you’ve got a great player that you’re going up against” – Marcus Smart

He has extremely high praise for Curry and embraces the challenge of having to be at his best when he’s playing a competitor like him. He’ll get his next chance on 1/19 at 7:30pm when the Celtics host Golden State.