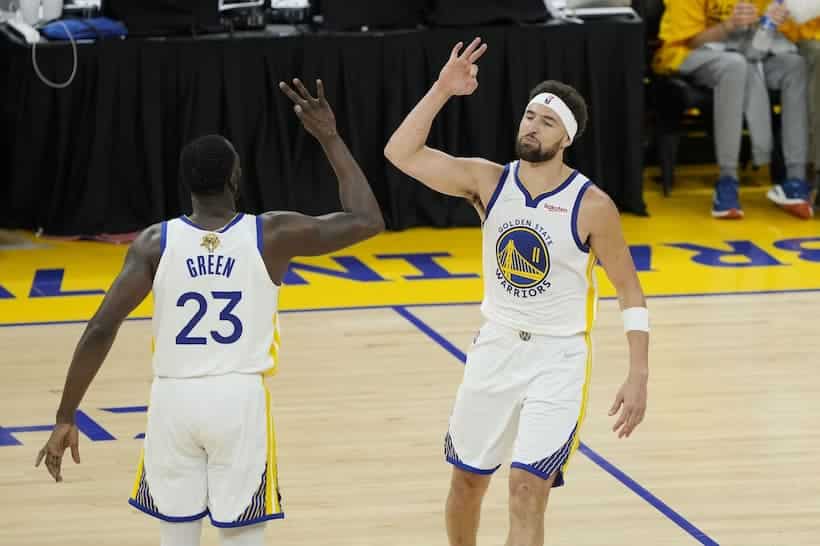 The Golden State Warriors had an impressive 143-141 win in double OT vs the Atlanta Hawks on Monday night. It came down to a game-winning shot by center Kevon Looney. Taking over for the Warriors while Steph Curry is out with a shoulder injury was his long-time teammate Klay Thompson. He dropped 54 points and hit ten three’s in the game. What left NBA fans in awe was this ghost pass from Draymond Green to Thompson that’s a real headscratcher.

Darymond has had so much success with the Warriors due to his unselfishness as a player. He’s a willing passes and cares more about winning than anything else. The four-time NBA champ had eleven assists vs the Hawks on Monday night and made an insane assist that had left everyone guessing how it happened.

I’ve watched this a billion times and I still don’t get it pic.twitter.com/tS0OO2wRtD

Klay Thompson is known for taking a nice screen and easily curling around it into a three-point look. That’s exactly what Green did for Thompson on Monday night. Green set a screen for Thompson with his back facing the camera and it’s virtually impossible to tell how the pass got to Thompson and when the ball moved. NBA betting sites have the Warriors at (+1100) to win the Finals this season.

The ball never bounces off the ground and it’s hard to even see the transfer of the ball. It must have happened that quickly where it just can’t be seen via a video. We knew Draymond was an elite passes, but we didn’t know he could fool us this bad. Breaking down the video, it seems there can only be one logical explanation.

Dontae DiVincenzo passes the ball to Draymond Green after he calls for the ball. With the ball still in his hands, Green set a screen for Klay Thompson who curl around him to the right side and almost immediately has the ball in his hands. It’s hard to see when and how Green made the handoff between him and Thompson because it’s hard to see in video. If you look extremely close you can see Green kind of shovel pass the ball to his right and it’s in Thompson’s hands right away. That’s the only logical explanation as to how Green got that pass off. Hopefully the media asks him how he did it and he can give a real explanation.