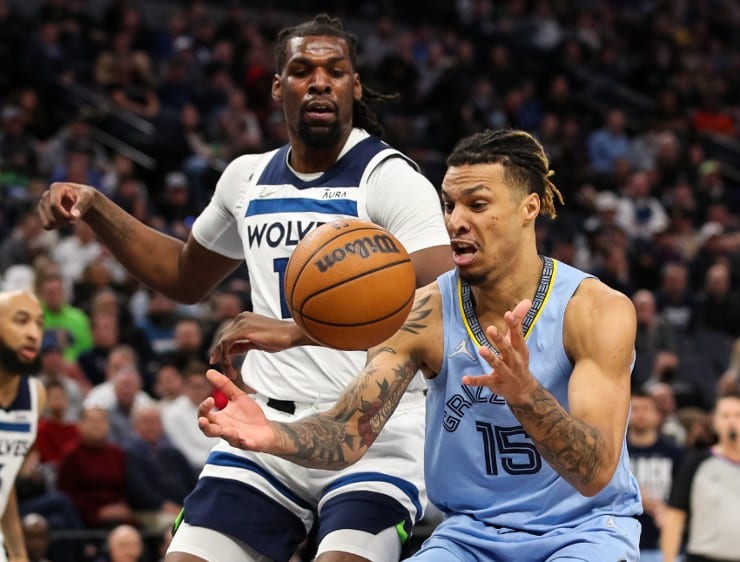 On Saturday, the 2022 NBA Playoffs kicks off with four games; free NBA playoffs predictions, odds, and best NBA bets are featured here. First, the Utah Jazz are squaring off against the Dallas Mavericks at 1 p.m. ET. After that, the Minnesota Timberwolves play the Memphis Grizzlies at 3:30 p.m. ET. BetOnline odds and free NBA picks are featured below.

Next, the Toronto Raptors are taking on the Philadelphia 76ers at 6 p.m. ET. Lastly, the Golden State Warriors are hosting the Denver Nuggets at Chase Center. This contest begins at 8:30 p.m. ET. The first three games will air on ESPN. The Nuggets-Warriors game can be viewed live on ABC.

For Game 1 of the Jazz-Mavericks first-round playoff series, the Jazz are five-point favorites. Leading into this series, the top story pertains to Mavericks’ guard Luka Doncic. Due to a calf injury, he has been ruled out indefinitely. Since Dallas will be without its leading scorer, all eyes are on Utah to pull away with a win at American Airlines Center.

Not to mention, the Mavs will also be without Frank Ntilikina. He was ruled out on Saturday morning because of an illness. Even though Dallas is on a four-game winning streak, the team will likely struggle to win without playing at full strength. Additionally, the Jazz are 0-5 ATS in their last five matchups versus the Mavericks.

Upon further review of these Western Conference contenders’ head-to-head records this season, the teams finished 2-2 against one another. On Mar. 27, Dallas defeated Utah 114-100 at American Airlines Center. Plus, the Jazz are 12-5 in their past 17 matchups against the Mavericks. While Dallas is 7-1 in its previous eight games, Utah gave the team issues during the regular season.

For another important betting trend, the total has gone under in five of the Mavs’ last seven meetings versus the Jazz. The best NBA bet is riding with Utah for Game 1. Pick the Jazz to win, the Mavs will cover the spread and the total will go over 209.5. Other NBA playoffs predictions, odds and best NBA bets are on the main page.

Furthermore, the Timberwolves have failed to cover the spread in their past five road matchups versus the Grizzlies. Aside from having different records, the Grizzlies are the hotter team, and they have Ja Morant back. These are logical reasons as to why Memphis is a 6.5-point favorite at home over Minnesota for Game 1.

After skimming through noteworthy betting trends, the Timberwolves are 2-8 in their previous 10 matchups against the Grizzlies. And, the total has gone over in five of Minnesota’s past six contests. On the other side, Memphis is 10-1 at home in its last 11 games played.

According to the Timberwolves’ injury report, Taurean Prince is listed as questionable to play this afternoon. They are coming off a 109-104 play-in tournament victory over the Clippers. The Timberwolves have some momentum on their side, but they have to hit the reset button right now. Their win over Los Angeles means nothing now.

These Western Conference teams finished 2-2 against one another during the regular season. Taking everything into account, pick the Grizzlies to win, they will cover the spread and the total will go under 236.5. Memphis is 30-11 at home this season. More NBA playoffs predictions, odds and best NBA bets are on the main page.

Heading into this Eastern Conference rematch, Philadelphia is a five-point favorite over Toronto for Game 1. Both contenders are 3-1 in their last four games played. Though, the edge goes to the Sixers. They closed out their regular season with two straight victories. The Raptors can upset the 76ers tonight, but they will have to dominate the floor earlier on.

As for the Raptors’ injury report, OG Anunoby is listed as probable to play in this contest. On the other side, Charles Bassey is out for the 76ers and Jaden Springer is listed as questionable to play. This is actually the perfect matchup for both teams. Toronto finished 24-17 away during the regular season, whereas Philadelphia ended its schedule 24-17 at home as well.

In the last four head-to-head meetings, the Raptors are 3-1 against the 76ers. To add to the aforementioned observation, Toronto is 10-5 in its past 15 matchups against Philadelphia. Referring to the point spread consensus, about 65% of bettors are counting on the Raptors to covering the spread at Wells Fargo Center.

For the point total consensus, approximately 56% of gamblers are expecting the total to go over 216. The Sixers are 4-2 ATS in their last six home games versus the Raptors. All things considered, pick the 76ers to win Game 1, they will cover the spread and the total will go over 216. Other NBA playoffs predictions, odds and best NBA bets are on the main page.

To conclude the first day of the 2022 NBA Playoffs, the Nuggets are aiming to upset the Warriors at Chase Center. Golden State is a 6.5-point favorite over Denver. Despite the Nuggets winning two of their last five games to end their regular season, the Warriors won their final five contests. Of course, Golden State’s win streak came only after the team ended a four-game skid.

The Nuggets will have to find a way to win today without Facu Campazzo. He is serving a one-game suspension today after shoving Lakers’ guard Wayne Ellington in the Nuggets’ regular-season finale. Meanwhile, Warriors’ guard Stephen Curry was upgraded to probable a couple of hours ago. He has not played since his team’s Mar. 16 loss to the Celtics.

Moreover, the Nuggets are 10-1 in their previous 11 road games. Also, the total has gone over in four of the team’s past six contests. They are 3-1 in their last four meetings versus the Warriors. Nonetheless, Denver is 3-9 ATS in its previous 12 matchups against Golden State. This explains why the Warriors are the favorites in this series.

Bettors are undecided on which team they want to trust tonight. The current point spread consensus is 50/50, so choose carefully. In the end, pick the Warriors to win, the Nuggets will cover the spread and the total will go over 223. Additional NBA playoffs predictions, odds and best NBA bets are on the main page.

BetOnline is one of the best sportsbooks in California, Colorado, Minnesota, Pennsylvania, Tennessee, Texas and Utah.