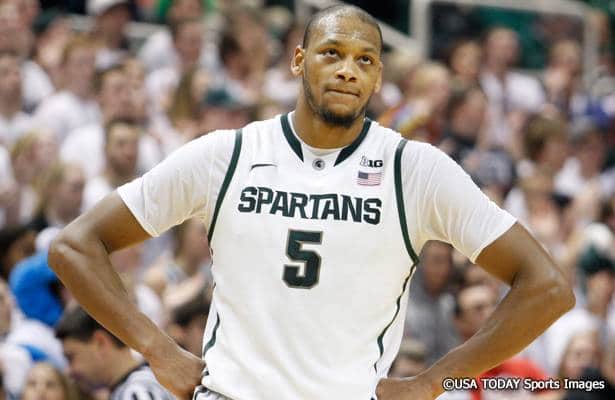 The 2014 NCAA Tournament is underway and Thursday’s action didn’t disappoint. There were close games, thrilling upsets and huge performances from some notable names.

Which players shined the brightest on the first day of March Madness? Basketball Insiders put together a list of the day’s studs:

Adreian Payne, Michigan State – Payne was the most dominant player on Thursday, contributing 41 points in (4) Michigan State’s win over (12) Delaware. The 41-point outing was a career-high for the 6’10 senior, who also chipped in eight rebounds in the victory. Payne was unstoppable and Delaware didn’t have anyone down low who could compete with the 2014 NBA draft prospect, who is currently being projected as a mid-to-late first-round pick. Payne hit 10-of-15 from the field, 4-of-5 from three-point range and 17-of-17 from the free-throw line (a tournament record for the most free throws without a miss). If Payne keeps performing like this, he could play his way into the lottery.

Lawrence Alexander, North Dakota State – The Bison had four players score in double digits in (12) North Dakota State’s upset victory over (5) Oklahoma, but nobody was more productive than Alexander. The junior guard finished with 28 points, four assists and eight rebounds (even more impressive considering he’s 6’3). Alexander was 10-of-15 from the field, 4-of-7 from three-point range and a perfect 4-of-4 from the free-throw line. North Dakota State’s star Taylor Braun struggled in this one – he had just 11 points on 3-of-11 shooting and four turnovers before fouling out – but Alexander bailed him out and helped the Bison advance.

Rob Loe, Saint Louis – It looked like the Billikens’ season was over. (5) Saint Louis trailed (12) NC State by 14 points with five minutes left in regulation. Then, the Billikens fought back and won the game, thanks in large part to Loe’s dominant performance (and 17 missed free throws by the Wolfpack). Loe, a 6’11 senior, finished with 22 points and 15 rebounds after averaging just 9.9 points and 5.4 rebounds during the season. He hit 8-of-11 shots from the field, including 4-of-6 from three-point range. Saint Louis survived a scare on Thursday, but now they’ll take on the defending champion (4) Louisville Cardinals.

Shabazz Napier, Connecticut – Napier enters the tournament as one of the most electrifying players in the field, and he didn’t disappoint on Thursday. The senior guard led (7) Connecticut to an overtime win over (10) Saint Joseph’s, contributing 24 points, eight rebounds, six assists and three steals in the victory. Napier missed a three that would’ve won the game at the second-half buzzer, but he made up for in it in overtime when he scored nine of his 24 points. Napier was on UConn’s 2011 national championship team and he’s hoping to lead the Huskies on another deep postseason run before he leaves school to begin his professional career this summer.

Elgin Cook, Oregon – Four of the Ducks’ five starters scored seven points or less, but Cook saved the day with a huge performance off of the (7) Oregon bench to seal the team’s win over (10) BYU. Cook finished with 23 points in 23 minutes, finishing as the game’s leading scorer. He was 8-of-9 from the field and 7-10 from the free throw line. He also contributed eight rebounds off of the bench. It was Cook’s most productive game of the season, as he entered the contest averaging just 6.3 points and 3.6 rebounds.

Which player impressed you the most on Thursday? Leave your thoughts in the comment section.