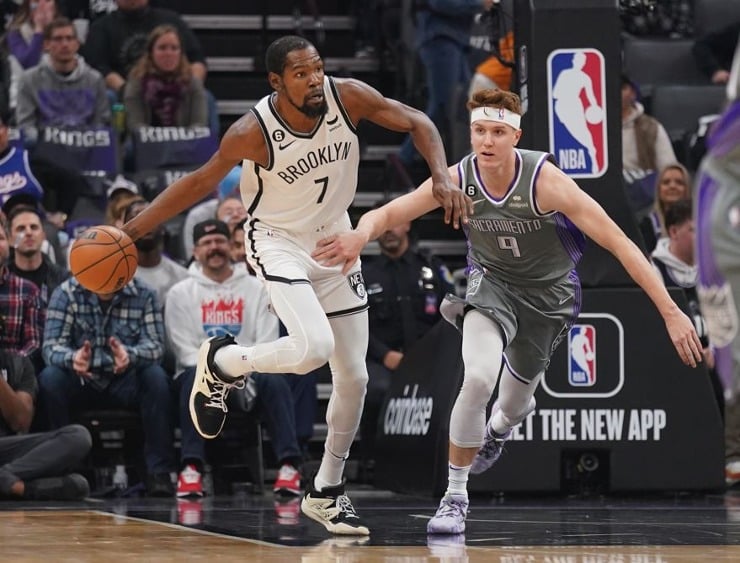 Brooklyn Nets star Kevin Durant believes Sacramento Kings guard Kevin Huerter is playing some of the best basketball in the NBA, and the two-time Finals MVP compared him to Klay Thompson and Stephen Curry.

According to a few NBA betting sites, the Nets possess the sixth-best odds to win the championship in 2023. Meanwhile, some sportsbooks are giving the Kings the 12th-lowest odds.

"Kevin Heurter, right now, he's playing like Klay, Steph. If you're not a basketball fan and locked in on the league, you gotta watch how Kevin Heurter is shooting this ball right now."@KDTrey5 sees what they're doing in Sacramento. 👀

“If you’re not a basketball fan and locked in on the league, you gotta watch how Kevin Huerter is shooting this ball right now,” continued the Nets star. “He’s in the fifties…”

The guard’s weakness right now is his free throw shooting. Huerter is averaging a career-high 2.3 free throw attempts per game. But he’s shooting only 64.9% at the foul line.

Besides a couple of missed free throws, the Kings guard is playing phenomenal. He’s posting a career-best true shooting percentage of 67.3%. And his 3-point attempt rate is 64.8%.

“Kevin Huerter is shooting seven threes per game — I feel like seven or eight — and they’re all at 50%,” added the Nets wing. “When you hear that and watch the clips and film, it’s just like, ‘Oh s—t, we’re in a for a long night.’

And then you have De’Aaron Fox coming down that hill at you all game and Harrison Barnes, who can get a bucket on anybody. Keegan Murray is playing like Michael Porter Jr.”

The Sacramento Kings traded Justin Holliday, Moe Harkless and a 2024 lottery protected first-round pick for Kevin Huerter, who is averaging a career-high 16.6 points and is shooting almost 50% from three.

One of the best trades in Kings franchise history.

Durant’s 3-point attempts estimate was spot on. Huerter is averaging 7.4 shots from 3-point range per contest this season. The Sacramento guard is also logging 3.7 threes per game.

More importantly, the Kings are playing their best basketball in years. After starting the season 2-5, the team is now 10-6 and ranks fourth overall in the Western Conference.

Without Kevin Huerter, Sacramento might be in a different spot in the standings. For points per game on the Kings, the guard trails only Fox (25.9) and Domantas Sabonis (17).

Additionally, the Kings are averaging a league-best 120.9 points per game. Sacramento fans hope to see their team end a 16-year playoff drought this season.