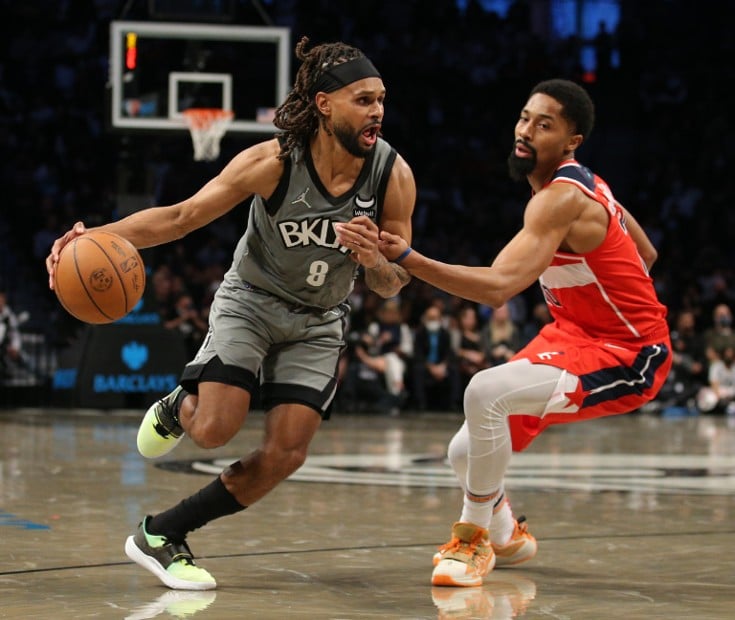 In tonight’s intraconference matchup, the Brooklyn Nets (8-37) are playing the Washington Wizards (25-18); NBA picks are available. Will Bradley Beal and the Wizards win their first game versus the Nets since Jan. 31, 2021? Together with the starting lineups, our top NBA picks and betting trends are featured below.

All Nets vs. Wizards betting odds can be found at BetOnline

Additionally, on Monday, in the Nets’ 114-107 road loss versus the Cavaliers, guard Kyrie Irving scored a team-high 27 points in 38 minutes on the court. Guard James Harden added one more double-double to his career total as well, amassing 22 points, 7.0 rebounds and 10 assists in 40 minutes played. In the fourth quarter, Cleveland outscored them 27 to 19. Brooklyn has won only four of its last 10 games. The team is 15-5 away, 12-11 at home and 11-9 ATS on the road this season.

Meanwhile, in the Wizards’ 117-98 home win over the 76ers on Monday, Montrezl Harrell led his team in scoring. He closed out his performance with 18 points, 7.0 rebounds and 1.0 assist in 21 minutes of action. Thomas Bryant and Kyle Kuzma also each contributed 15 points. Kuzma earned another double-double, accumulating 16 rebounds and 4.0 assists, too. Washington is now 13-8 at home, 10-13 away and 12-9 ATS at home this season.

For a notable reminder, the Nets defeated the Wizards this season on Oct. 25, 2021, winning 104-90 at Barclays Center. Nonetheless, Washington has not won against Brooklyn since Jan. 31, 2021, when the team outscored them 149-146 at Capital One Arena. That was one of the most competitive, highest scoring games in NBA history.

Though, Kevin Durant is out tonight due to a knee injury. Heading into tonight’s Eastern Conference contest, Nets head coach Steve Nash said that he does not expect to see Paul Millsap on the team’s road trip. Irving, Mills and Harden will have to carry the load.

Steve Nash said the #Nets might not see Paul Millsap (personal reasons) at all on this road trip. Adds Nic Claxton is day to day. #nba

Considering the number of players the Nets have on their injury report, contemplate picking the Wizards to win, cover the spread at home and the total will go over 233.5. However, in all fairness, the Nets have a better record on the road this season than they do at home. If you are new to sports betting and want to learn more, check out our handicap betting guide. Other NBA Picks are on the main page.