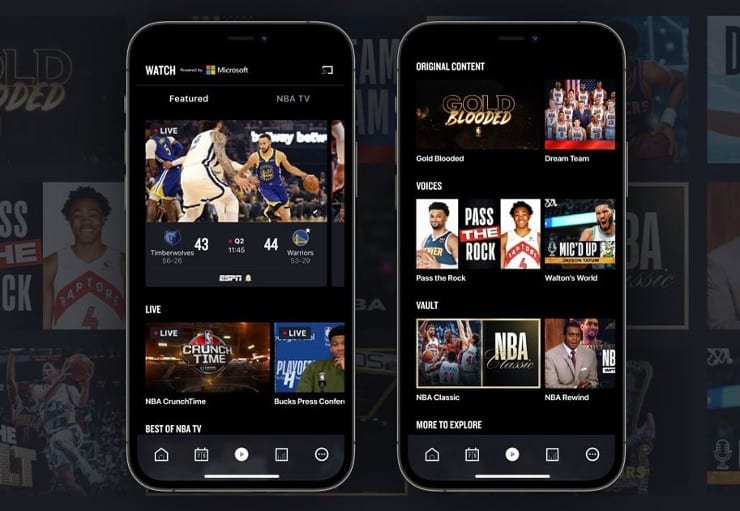 A new NBA app is launching today for fast and convenient purchases, including for League Pass, NBA TV, and higher-quality streaming. An all-in-one application is the future.

With the NBA app, according to Mike Vorkunov of The Athletic, live games will be shown with less latency. Previous network speed trailed live broadcasts by a minute. Of course, now it will be up to speed with basic cable channels.

This new NBA app will also make it easier to monitor bets and player performances for any specific game. In today’s technological age, network speed is everything. Check out which basketball betting sites are right for you.

The NBA App will include exclusive content, including “Gold Blooded,” a new seven-part docuseries narrated by Andre Iguodala that features never-before-seen footage and interviews of the @warriors' journey to the 2022 NBA championship.

Not to mention, the NBA app is “powered by Microsoft Azure and Azure AI,” per the news release.

Christopher Benyarko, the Executive Vice President of Direct-to-Consumer for the NBA, discussed the league’s new and improved application.

“We know that people are doing things direct to consumer with merging of those places, and the plan is to continue to integrate and bring that more in,” Benyarko explained.

“And we established a membership program to provide that connective tissue to get us started. But the idea is that when we think about direct to consumer moving forward, it’s going to be way more than just League Pass or NBA TV.”

Furthermore, the league is launching a free membership program known as NBA ID. This program will organize the league’s available products and allow members to have easy access to team-based content. The best word to describe NBA ID is customizable.

The league has made a number of welcoming changes this offseason. Two weeks ago, the NBA League Pass standard package dropped to $100 annually. Last season, this same package was priced at $230. Therefore, it’s 56% cheaper this year.

Additionally, the premium package was marked at $280 per month. Now, League Pass premium is $130 per month. Plus, the package is commercial free.

In the 2021-22 season, the league grew its out-of-market streaming service by 30%. Due to the ongoing streaming war between YouTube TV, fuboTV, Sling TV, and other services, Benyarko is striving to evolve how the league does its business.

In July, the NFL launched its new streaming service called NFL+. An NFL+ standard subscription costs $5 per month. NFL+ Premium is priced at $10 per month. And the full annual package is $40.

Equally important, compared to NBA League Pass, the NFL is lagging behind. Needless to say, the new NBA app is a step in the right direction. Unlike other professional sports leagues, basketball fans can easily watch any particular team’s games each season.