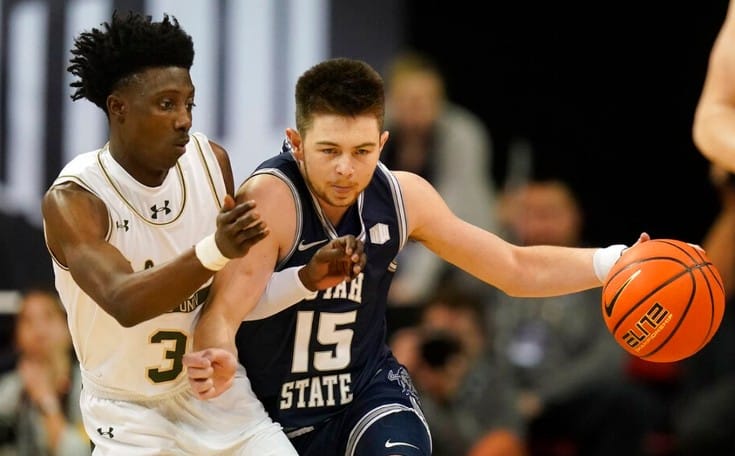 In tonight’s first-round matchup of the National Invitation Tournament (NIT), the No. 5. Oregon Ducks are taking on the No. 4. Utah State Aggies at Dee Glen Smith Spectrum; free March Madness picks are posted here. Utah State averaged 73.48 points per game and shot 34.32% from downtown during the regular season. Keep reading for Ducks vs Aggies preview content.

Without Will Richardson, can N’Faly Dante and the Ducks upset the Aggies? Utah State is 1-7 in its past eight matchups versus Pac-12 Conference opponents. Along with the starting lineups, our top NCAA picks and betting trends are featured below.

All Oregon vs Utah State betting odds can be found at BetOnline.

G Will Richardson (out indefinitely)

Heading into Tuesday night’s interconference contest, the No. 5 Oregon Ducks are preparing to play the No. 4 Utah State Aggies. As four-point underdogs, oddsmakers are not expecting the Ducks to win this one tonight. They are coming off a 80-69 road loss in the Pac-12 Tournament versus the No. 4 Colorado Buffaloes — played last Thursday.

In their 11-point defeat, forward Quincy Guerrier led his team in scoring with a double-double. He accumulated 25 points and 13 rebounds in 35 minutes of action. Guard Jacob Young also contributed 18 points, 4.0 rebounds and 7.0 assists in 38 minutes played. Oregon is 5-5 away, 12-5 at home, 2-4 at a neutral site and 4-6 ATS away. Free NCAA picks are below.

Meanwhile, last Thursday, in the No. 4 Utah State Aggies’ road loss against the No. 2 Colorado State Rams in the Mountain West Tournament, forward Justin Bean finished his performance with a double-double. He amassed 15 points, 13 rebounds and 3.0 assists in 40 minutes spent on the court. Utah State shot 22-for-54 (40.7%) from the field.

According to ESPN’s Basketball Power Index, the Aggies have a 62% chance of winning.

Oregon is 1-4 ATS in its last five games played in March, and the Ducks are also 0-5 ATS in their past five contests played on a Tuesday. On the flip side, Utah State is 8-3-1 ATS in its previous 12 games played on a Tuesday.  The Aggies are 9-6 at home, 4-7 away, 5-2 at a neutral site and 7-7 ATS at home this season. Oregon vs Utah State preview, prediction and free NCAA picks are below.

Just for a reminder, the Aggies are 6-3 ATS in their past nine contests when playing as the favorite. Also, the total has gone under in nine of Utah State’s last 10 games played in the month of March. So, pick the Aggies to win, they will cover the spread and the total will go under 145. For March Madness, skim through our handicap betting guide. Other March Madness picks are on the main page.