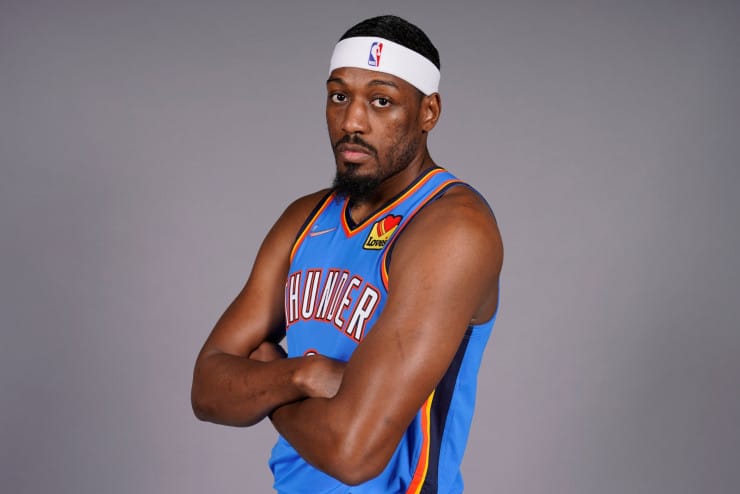 The past few years have been a grind for Paul Watson Jr.

After going undrafted in 2017 out of Fresno State, Watson played two years in the G League before breaking through to the NBA with the Atlanta Hawks on a 10-day contract during the 2019-20 season.

The Hawks opted not to re-sign him after the expiration of his 10-day contract, but the Toronto Raptors scooped him up immediately on a two-way deal. He played well enough with the Raptors 905, their G League affiliate, and had a standout game in the 2020 bubble to the tune of 22 points that Toronto decided to convert Watson’s two-way deal to a standard contract.

Despite seemingly finding a solid situation with the Raptors, the team decided to cut him before the start of this season. He managed to catch on with the Oklahoma City Thunder, but this type of grind is familiar to Watson. Coming from a mid-major in Fresno State, he knew he was going to have to work extra hard to make it to the league.

Now in his third year in the NBA, Watson always knew that this was where he belonged.

“It’s just fighting, always being counted out, but not letting that deter whatever my focus was,” Watson told Basketball Insiders. “I know where I belong and I know that’s the NBA. Getting there now, it’s just continuing to put in the work and trusting that everything will take care of itself.”

For most of his career in the NBA, Watson has been on a two-way contract. He is allowed to split time between his NBA team and their G League affiliate. This season in accordance with the league’s health and safety protocols, players on two-way contracts are no longer restricted to the number of games they can play with their NBA team.

The two-way contract grind is just another chapter of Watson’s professional journey. These last few seasons, as the NBA has done its best to navigate the ongoing COVID-19 pandemic, two-way contract players have become extremely important. As players continue to enter and exit health and safety protocols, a lot of two-way guys are getting called into immediate action when they normally would be spending time in the G League.

This season Watson has already played in eight games with the Thunder, including three starts which is more than his first two years in the league combined. He had one of his best games as an NBA player on Dec. 29 as a starter against the Phoenix Suns with 11 points, 6 rebounds and 55.6 percent shooting from the field.

For him, the uncertainty of knowing when he’ll be with the Thunder and when he’ll be assigned to the Oklahoma City Blue is one of the most challenging things about a two-way contract.
“Two-ways are a little bit more difficult than a regular contract, I’ve been on both. You’ve got to divide your time,” Watson said. “Everything is kind of up in the air. You’ve just got to take the punches, roll with it and make the most of it.”

Before he broke through to the NBA, the G League was no stranger to Watson. He spent his first two years as a pro with the Westchester Knicks, the affiliate of the New York Knicks. He actually had a training camp deal with the Knicks in 2018 but was cut before the start of the season.

He joined the Raptors 905 at the start of the 2019-20 season and his play there was what caught the eye of the Hawks for a 10-day contract. When he was picked up by Toronto after his 10-day expired, he continued to get playing time with the 905. Having spent a lot of time in the G League now, Watson has seen the level of competition grow and he feels the league is really on the verge of becoming something great.

The foundation for Watson to be prepared for the professional grind was actually laid out when he was still in high school. From Phoenix, Arizona, Watson played his high school basketball at Paradise Valley High School. He led the school to a state championship, but it was his AAU experience that helped set the tone for college and eventually the NBA.

Watson played his AAU ball with the Compton Magic under the guidance of Etop Udo-Ema. Compton Magic has become one of the premier grassroots organizations in the country and has had several players go on to have NCAA success. A few have made it to the NBA including Watson and last summer’s No. 3 overall pick Evan Mobley who is a current frontrunner for the Rookie of the Year Award.

The training and mentorship that Watson was exposed to with Compton Magic are what he credits for preparing him for the professional grind he now faces.

“I feel like that’s the best AAU organization out there, easily on the West Coast at least,” Watson said. “You’re well prepared for anything. We get a lot of guys to college. Etop Udo-Ema, he’s like the basketball godfather and I can’t thank him enough for everything he’s done for me. It’s an unbelievable program.”

Nothing is ever really guaranteed in the NBA, especially for players on two-way contracts. As per the NBA’s eligibility requirements, next season will be the last that Watson is eligible for a two-way contract. It will be his fourth year with NBA experience and as such, he’ll no longer be eligible for a two-way contract. To this point, he believes he’s shown enough in both the G League and in the NBA to prove that this is where he belongs at the highest level. Whatever should follow after this season, he believes he can fit in with anyone.