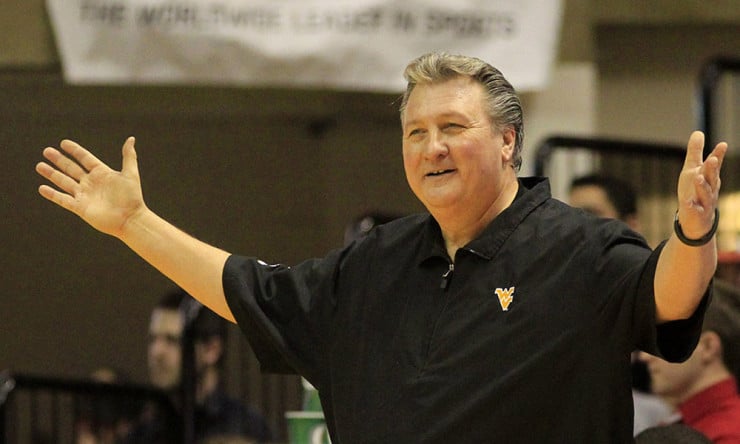 When asked how his team prevailed, Bob Huggins described things perfectly in his post-game interview: Juwan Staten! The senior guard, who recently missed numerous games with a knee injury, had 15 points and seven assists. His play in the waning minutes of the game is what every coach dreams of from their point guard. Adding Staten and Gary Browne back to the lineup had the Mountaineers off to a good start, but Bobby Hurley’s Buffalo team would not go away. With 28 seconds remaining, Staten found defensive stopper Tarik Phillip for a three that put the game away. West Virginia used its length and athleticism to shut Buffalo out for the final two minutes of the game. MAC Player of the Year Justin Moss was held to only six shot attempts. Buffalo was forced into 17 turnovers, which helped the cold shooting Mountaineers (5-17 from the three-point line) withstand the Buffalo runs. In what looks to be one of Sunday’s best matchups, Huggins will lead his team into battle with the Maryland Terrapins. WVU must have better perimeter shooting and get back on the offensive glass in order to take advantage of Maryland’s guard-heavy line up. Buffalo had four days to prepare for WVU and had a high turnover rate. Maryland, only having one day and not seeing many pressing and trapping teams this year, could play a major factor. The Terrapins’ Dez Wells is a dynamic player, but Huggins’ young group has thrived on challenges. WVU will have enough players to limit his touches as they did with Moss. Look for Daxter Miles Jr. to take his game to the next level as Maryland will be prepared for Staten.

Maryland marches on to the Round of 32 on the heels of a major scare from Bryce Drew and his Valpo squad. If the Terps are going to have any hopes of getting past West Virginia, it will hinge on great play from their version of the Big 3. Melo Trimble and Dez Wells did their part, but Jake Layman fouled out with four points and only one field goal attempted. He is going to have to find his A game in order for his squad to get the best of Bob Huggins. The saving grace against Valpo came at the free throw line, where Maryland went 18-24 (75 percent) a figure that can win you a lot of games. With that being said, a mere three offensive rebounds means the Terps did not create extra possessions and that can be a dangerous thing against a Mountaineers squad can create havoc on defense and force difficult shots. Look for Mark Turgeon to circle the wagons and use this near loss as a wake up call. If he finds the same Maryland team that beat the likes of Wisconsin then things will be looking up in College Park.