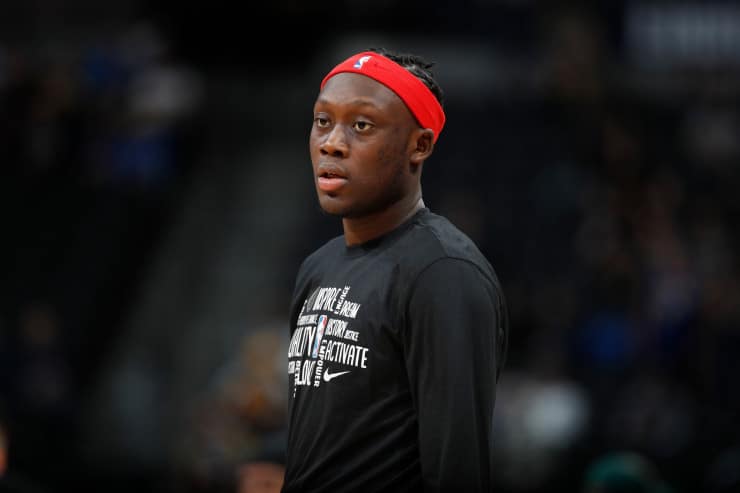 It was kind of a whirlwind summer for Sekou Doumbouya.

He had just finished his second season in the NBA with the Detroit Pistons and had shown glimpses of the player they believed they were getting when they drafted him at No. 15 in the 2019 NBA draft. When he was drafted, he became the youngest active player in the NBA at the time and it was always clear that he was going to be a project.

The Pistons went through a management change, however, and as it so often happens, new management wants to put their own touches on the team and sometimes clean house especially when it comes to a rebuilding team like Detroit.

Longtime NBA executive Ed Stefanski had been in charge of basketball operations in his role as senior advisor to the owner, and he was the one who drafted Doumbouya. In the summer of 2020, the Pistons hired Troy Weaver as a full-time general manager working under Stefanski. Weaver immediately got to work wheeling and dealing and shaping the roster in accordance with his vision.

One of those moves was giving up on Doumbouya this past summer. In a salary clearing move, the Brooklyn Nets traded DeAndre Jordan and multiple draft picks to the Pistons for Doumbouya and Jahlil Okafor. The Pistons never had any plans to keep Jordan and they immediately bought out his contract.

On the other end of the deal, Doumbouya became the odd man out in Brooklyn. The Nets brought him to camp and he played in one preseason game putting up an impressive stat line of 11 points in 12 minutes on 100 percent (3-3) shooting from the field. But needing to get down to the NBA roster maximum of 15 players as well as cut down their luxury tax bill, the Nets shipped Doumbouya off to the Houston Rockets who immediately cut him despite being in full-blown rebuilding mode.

Despite three teams having given up on Doumbouya in about the span of a month, there was no question about his talent. He wasn’t a free agent for long as the Los Angeles Lakers signed him to a two-way contract soon after he was cut by Houston. A foot injury caused him to miss the first month of the season and the Lakers cut him as they needed immediate help due to a short-handed roster because of injuries and league health and safety protocols.

The Lakers continued to monitor his progress, however, and once he was healed and ready to return to the court, they re-signed him last month after opening up a two-way contract spot by cutting Jay Huff. They kept in contact with him the entire time he was rehabbing and that, combined with the team’s recent track record of finding young talent were the main reasons why Doumbouya initially chose to sign in LA.

“It was the organization, that’s the first thing that I kept in my head,” Doumbouya told Basketball Insiders. “They got a great organization with great people, great players down there and a great staff. They have the formula to grow as a player and as a human being. My decision was pretty fast, pretty quick.”

His performances and talent were enough to get him on the radar of NBA scouts and after spending 2018-19 with Limoges, he made himself eligible for the NBA draft. His two years in Detroit were anything but consistent. He got off to a slow start at summer league with a hamstring injury and he suffered a concussion during training camp that kept him out further.

His rookie season in Detroit was up and down. He spent the majority of the first half of the season in the G League with the then Grand Rapids Drive, but by the second half of the season, he was in and out of the Pistons starting lineup with several double-digit scoring games.

Doumbouya’s playing time decreased in his second season with the Pistons and he struggled to find consistency on the court. By the end of the season, he was the longest-tenured player on the roster and it was evident that new management wanted to start fresh. He admitted that it took some time to get used to the NBA game after playing in France, and he is grateful for what he learned in Detroit.

Staying ready is what he’s been doing and what he’ll continue to do until the Lakers should call his number. As a two-way contract player, he’s been assigned to the Lakers G League affiliate, the South Bay Lakers, and that’s where he’s stayed since re-signing with the team last month. He played in two games with the Lakers back in November before his foot injury but he hasn’t been called up since.

He’s been putting in the work with South Bay though. His skill-set is unlike any other player on the South Bay roster. He’s played both power forward and center and he’s shown the ability to start the break off the rebound. He can handle the ball in transition and his decision-making on the break has been very good. Not only can he go the length of the court and score, he can make the right reads and find open teammates in transition. He’s also shown off a nice touch from three-point range and above-average finishing ability around the rim.

His G League stats may not jump off the page (6.7 points per game, 4.9 rebounds, 35.4 percent from the field, 21.6 percent from three-point range), but those stats don’t tell the whole story. But it’s not his offensive game that he’s most thrilled about. Should the Lakers need his services at some point during the season, it’s the other end of the court where he’s confident he can make the most impact.

“My defense, just a lot of energy defensively,” Doumbouya said. “Everybody knows we [the Lakers] need a lot of defense up there. So I know I can bring that. I want to be a good defender for the team and help the team win games in that way.”

Doumbouya certainly has the skill-set to be a good defensive player in the NBA. With South Bay, he’s shown his versatility in guarding multiple positions. He’s able to use his size and provide an anchor and shot-blocker in the paint, and he’s got the foot speed and ability to switch out and cover wings on the perimeter.

In today’s NBA, it’s almost a requirement for players to be able to do multiple things on the court on both ends. It’s not enough to only guard on position. It’s not enough for a big man to only be able to play in the paint. Doumbouya knows this and it’s something he’s focused a lot on while in the G League.

It’s unclear whether the Lakers have any plans to call Doumbouya up to the team anytime soon. They’re a team full of veterans that despite their current place in the standings, have had championship aspirations. They’re an older team though and perhaps they could benefit from the addition of some youth like Doumbouya.

In any case, he’s going to stay ready, keep working on his game and stay focused on the goals he’s set for himself for this season. In his eyes, he can be one of the better defensive players in the NBA.

“I want to be a better man, first of all,” Doumboya said. “Secondly, I want to be the best defensive player I can be. That’s my main focus going forward.”