Home » news » Six Players Who Could Bust Your Bracket 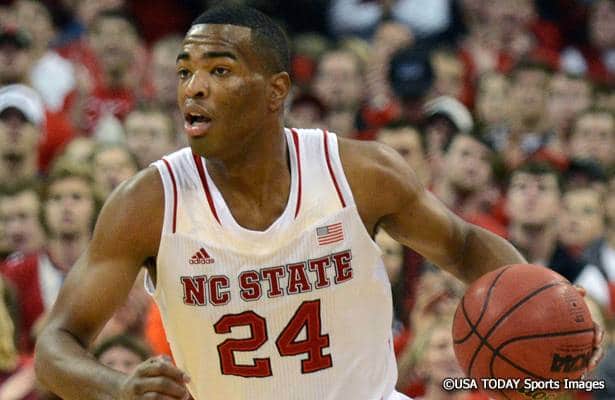 When people talk about “Bracket Busters” in terms of the NCAA Tournament, they typically are referring to low-seeded teams toppling higher-seeded teams, but the term can actually refer to individuals as well. There is, after all, a reason those Cinderella squads best college basketball’s mighty giants, and it usually has to do with one really prolific player who has the opportunity to destroy an opponent all by himself.

Today, we take a closer look at six players on unheralded teams who could demolish your ability to take home tournament pool money. Here they are, in no particular order:

T.J. Warren, NC State – One of the country’s top scorers, ACC Player of the Year T.J. Warren is always electrifying to watch when he’s on the court. Likely headed for the first round of the NBA draft this summer, Warren is averaging 24.8 PPG this season and can beat teams on the offensive end in a variety of ways. He and his Wolfpack put up a strong showing in the ACC tournament, and there’s a good chance that momentum could work its way into the Big Dance, as well. Few players can put a team on their shoulders like Warren, and he’s dangerous enough to break some hearts in the early rounds of this year’s tournament.

Bryce Cotton, Providence – North Carolina is obviously a pretty formidable first-round opponent, but 11-seed Providence is an interesting upset candidate thanks in large part to the strong play of senior Bryce Cotton, who recently led Providence to the Big East conference championship. The mighty little point guard is a tremendous leader and elite scorer who plays a ton of minutes and clearly has his team riding some momentum heading into the tournament. He’s a spoiler for this thing in every sense of the word, and if Providence does knock off the Tar Heels, he’ll have been a big reason why.

Jeremy Ingram, NCCU – Not a lot of casual college hoops fans are all that familiar with North Carolina Central and their star guard, Jeremy Ingram, but those who have been paying attention know that Ingram is a kid that can absolutely explode offensively. That means big tournament games could be on the horizon for him and his Eagles. Ingram has scored 36, 37 and 38 points in various games this season, and with an outburst like that against third-seeded Iowa State, they could prove one of the first round’s most shocking teams.

Cameron Bairstow, New Mexico – Only a 7-seed, New Mexico heads into the tournament riding a good deal of momentum after a Mountain West conference tournament title spearheaded by tourney MVP Cameron Bairstow. The Australian-born forward averaged 20 points, nine rebounds and two blocks during that tournament, but more importantly he led them to a win over the more highly-touted San Diego State. The Lobos are looking strong of late behind Bairstow’s leadership, and they’re hoping that translates to a few extra wins in the big tournament, as well.

Tyler Haws, BYU – Haws, the WCC Player of the Year, just wrapped up a regular season in which he finished sixth in the country in scoring with 23.4 PPG. He’s currently fifth on Brigham Young’s all-time scoring list and has a very good chance at taking the No. 1 overall slot away from Jimmer Fredette at some point over the course of his senior year. But for right now, opposing teams need to see him strictly as a potent offensive guard who, though small, is capable of wreaking havoc in tournament play. As a 10-seed, not much is expected out of BYU, but Oregon, Wisconsin and Creighton all are beatable teams. It’s not completely inconceivable that Haws could help lead his team to an Elite 8 appearance.

George Beamon, Manhattan – Taking on defending champion Louisville in the first round of the Big Dance is no easy task, but if 13th-seeded Manhattan is going to beat them, leading scorer George Beamon (19.2 PPG) will have to have a huge game. The double-overtime MAAC tourney win over La Salle was thrilling, no doubt, but Beamon’s ability to chuck up (and drain) a ton of shots nearly every game is one of the most important reasons Manhattan is even in the tournament in the first place. He hasn’t scored fewer than 24 points in any of his last five games, and his team is coming off a conference championship win. They’re hot, and so is their leading scorer. Louisville may not float through this one as easily as some people think.

College basketball is cutthroat this time of year, and a lot of that has to do with the fact that these players do a great job at spoiling each other’s parties. They won’t all make it out of the first round, but a few them could. For some readers, it only takes one to bust a bracket.