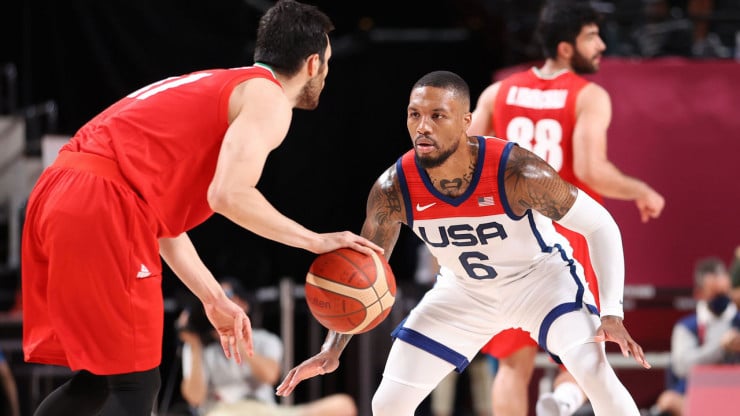 Team USA defeated Iran 120-66 in Wednesday morning’s matchup. According to DraftKings, USA was favored by over 40 points versus Iran. This was a much-needed victory for the Group A competitor. The team’s next matchup is against the Czech Republic. The USA vs. Czech Republic game is scheduled for Saturday, July 31st at 8:00 a.m. (EST). While the first three of the USA men’s basketball games cannot be watched live on television, the delayed games will air on NBC Sports Network.

However, Peacock, NBA’s exclusive streaming app, is available for live viewership. The games can also be watched via the NBCOlympics.com live stream. For the best NBA betting apps, BetOnline, BetUS, Bovada, MyBookie, and Intertops are available sources. On August 6th, the gold medal game can be watched live on NBC or with fuboTV. The time of that game is schedule for 10:30 p.m. (EST). Regarding injuries, there are none listed for the USA and Czech Republic men’s basketball teams.

Bovada’s futures odds for the Tokyo Olympic Games are helpful for basketball bettors, too. Pertaining to the “USA vs. Czech Republic” table odds down below for the spread, moneyline, and total, this image was retrieved from MyBookie.ag.

After suffering their first defeat in the Olympics since 2004, Team USA’s record is now 1-1 in the Tokyo Olympic Games. Leading into the USA vs. Iran matchup on Wednesday, bettors worldwide were wondering why Team USA’s point spread odds increased from 12-point favorites to 41-point favorites. As it turns out, USA won by 54 points. Either the Iranians forgot they had a game scheduled this morning, the team has zero notable NBA All-Stars, or maybe the Americans were striving to achieve a statement-win after losing 83-76 versus France. It could have been a combination of these three logical explanations.

In the team’s 120-66 win over Iran, Trail Blazers‘ guard Damian Lillard led USA on the stat sheet, ending his performance with 21 points, two rebounds, and five assists in 23 minutes played. He also shot 7-for-13 from beyond the arc. Suns’ guard Devin Booker had 16 points, five rebounds, one assist, and three steals as well.

From the bench, Celtics‘ forward Jayson Tatum closed out his performance with 14 points, four rebounds, two assists, and one block. Every single player on Team USA scored at least two baskets in this match. Moreover, USA shot 42-for-76 (44.3 percent) from the field, whereas Iran shot 25-for-67 (37.3 percent). Not only did the Iranians struggle to hang onto the ball, considering they had 23 turnovers and the Americans had 10 steals, their shooting accuracy was pitiful.

The USA has had several Olympics’ blowout wins in the past, but after previous lackluster performances against Australia, Nigeria, and France, fans were not actually expecting this 120-66 victory. Oddsmakers were projecting a victory by at least 40 points. Some of us could not believe what we watched. Perhaps, the Iranians were not used to competing against NBA All-Stars. Their shooting accuracy was putrid in this morning’s game. Having said all of this, bettors should not read too much into this win for Team USA. It was just one game.

According to one Bleacher Report article, Team USA players were complaining about head coach Gregg Popovich’s style of offense. This was first reported by Joe Vardon of The Athletic earlier today. Of course, Coach Popovich wants to run his San Antonio Spurs‘ offense with this Olympic team. His system is centered around persistent ball movement across the court. This worked out especially well with the Spurs’ big three: Tony Parker, Manu Ginobili, and Tim Duncan.

Not to mention, Coach Popovich was named Coach of the Year three times, and he was the NBA All-Star Game head coach four times. He knows what he’s doing. This led to the Spurs winning five NBA titles. Though, team chemistry is also important. Needless to say, these All-Star players are not used to playing on the same team. Each player uses different methods to score baskets and share the wealth on the court.

On the flip side, the Czech Republic lost to France 97-77. Heading into this matchup, the French were nearly 10-point favorites over the Czechs. So, oddsmakers nearly got this one correct. In 32 minutes played, Czech center Jan Vesely led the team in the box score, with a total of 19 points, five rebounds, three assists, and four steals. The seven-foot big man also shot 9-for-12 from the field. Ondrej Balvin finished his performance with 18 points, eight rebounds, two steals, and three blocks in 27 minutes played. Plus, starter Tomas Satoransky and bench player Patrik Auda scored 14 points a piece.

Upon further review of the team statistics, France out-rebounded the Czech Republic 35 to 26. This was a contributing factor in their 20-point loss here. Nevertheless, another factor was their low free throw shooting percentage. The Czechs shot 7-for-16 (43.8 percent) from the free throw line, while the French shot 8-for-10 (80 percent). Concerning the 21-point spread for the USA vs. Czech Republic upcoming match, in terms of shooting, it now makes sense based on how inaccurate the Czechs are on the court.

It is possible for the odds to change before the USA plays the Czech Republic on Saturday. However, the Americans will still remain the favorites in this matchup, assuming multiple starting players do not test positive for COVID-19 or sustain any major injuries. Per DraftKings Sportsbook, the spread is listed at -21.5, favoring USA. By the end of Thursday, the spread might increase to -28. Despite the team winning by 54 points over Iran, a margin of victory between 20 to 30 points sounds more reasonable.

The Americans cannot crumble their opponents by over 50 points every game. Therefore, the odds still favor Team USA no matter what right now. Who knows? Maybe USA could defeat similar lower-tier teams, such as Iran or Czech Republic, with only their bench players. Now, that would be something worth watching. In all seriousness, while the annoying “USA is the best! We’re winning the gold!” biased optimism and blind homerism has not yet returned to USA men’s basketball, the team defeating below average opponents certainly helps to raise confidence levels.