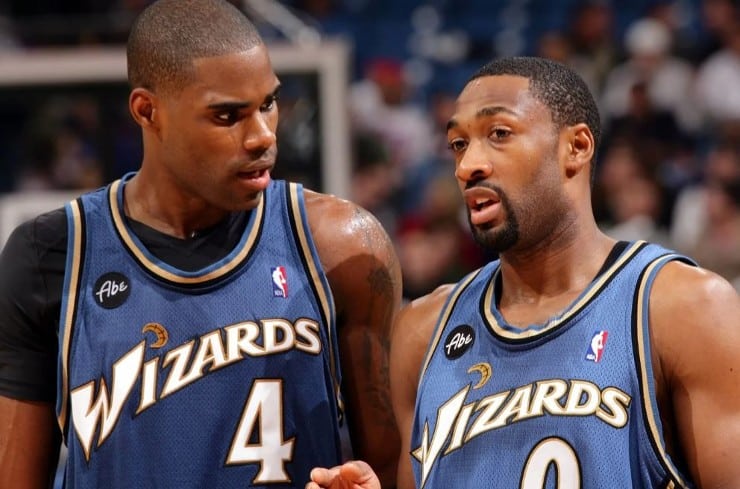 The Washington Wizards are scheduled to honor retired stars Gilbert Arenas, Antawn Jamison, and Caron Butler on Nov. 18 at Capital One Arena against the Miami Heat.

This ceremony is part of the team’s 25th anniversary of their rebrand. Arenas played 11 years in the league. He was selected 31st overall by the Golden State Warriors in the 2001 NBA Draft.

Per multiple NBA betting sites, the Wizards possess the eighth-lowest odds to win the championship in 2023. But a few sportsbooks are anticipating a playoff appearance this season. At the moment, Washington is 3-1 to start the season.

The Wizards are going to honor Gilbert Arenas, Caron Butler and Antawn Jamison on Nov. 18 at their game against the Heat as part of the 25th anniversary of their rebrand.

After two seasons with the Warriors, the guard signed as a free agent with the Wizards. Of course, Arenas played eight seasons (2003–10) with Washington.

Plus, Arenas received all three of his All-Star selections with the Wizards. In the 2006-07 season, after logging 28.4 points and 4.6 boards per game, the guard was named to the All-NBA Second Team.

Next, Antawn Jamison was selected fourth overall by the Toronto Raptors in the 1998 NBA Draft. But the forward was then traded to the Warriors for Vince Carter and cash.

Jamison played his first five seasons with Golden State and the 2003-04 season with the Dallas Mavericks. Then, the wing went on to play his next six seasons (2004–10) with the Wizards.

Additionally, the UNC product spent 16 years in the NBA. In 421 career games with Washington, Jamison averaged 20.8 points, 8.9 rebounds, 1.8 assists, and 1.1 steals. He earned both of his career All-Star selections with the Wizards.

Jamison currently serves as director of pro personnel for the Wizards.

Moreover, the Miami Heat picked Caron Butler at No. 10 in the 2002 NBA Draft. The former UConn forward played his first two professional seasons with the Heat. However, Miami then traded Butler to the Lakers during the 2004 offseason.

Similar to Jamison, Butler earned both of his All-Star selections with Washington. In 2018, he retired after a 14-year career. Now, the Wisconsin native serves as an assistant coach for the Heat.