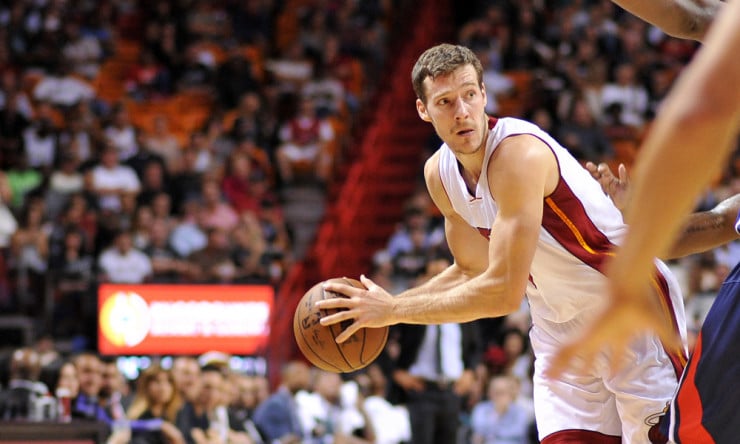 Goran Dragic and the Miami HEAT have reportedly agreed to a five-year, $90 million deal, according to ESPN and Yahoo! Sports. Marc Stein of ESPN reported that the new deal will include an option after the fourth year, which will enable Dragic to become an unrestricted free agent if exercised.

Dragic was one of the HEAT’s top priorities this offseason, in addition to the pending free agency of Dwyane Wade. The free agency period began at 12:01 a.m. EST Wednesday morning and it was reported shortly after that time that HEAT officials reached out to Dragic and Wade to discuss contract negotiations. While the two sides reportedly agreed to the new deal, nothing can become official until July 9 when the moratorium is lifted enabling players to sign new deals.

Dragic announced back in April that his intention would be to opt out of his deal and become a free agent, but maintained that he wished to remain with the HEAT organization in the future. Stein reported that Dragic took a bit of a pay cut to give the team some extra flexibility in order to have more cap space to re-sign Wade.

The team acquired Dragic back at the trade deadline in February from the Phoenix Suns in exchange for two future first-round draft picks and other players. Many at the time were concerned with the amount of compensation the HEAT gave up in order to acquire Dragic given his upcoming free agency, but the team felt confident Dragic would return and opted to execute the trade.

The HEAT narrowly missed the playoffs last season as they finished just one game back of the Brooklyn Nets in the final playoff spot in the Eastern Conference. With a healthy Chris Bosh expected to return, the HEAT figure to be right back in the playoff race next season with Dragic returning and with the addition of rookie Justise Winslow. Luol Deng has also reportedly informed the team that he will return next season after exercising his $10.1 million option.

Shortly after reports surfaced of Dragic’s agreement, it was reported by Yahoo! Sports that the team and Wade were progressing in talks for a multi-year deal. With Wade reportedly close to returning to the Miami, the team will have a promising core of players for next season in Bosh, Wade, Dragic, Deng, Winslow and Hassan Whiteside.