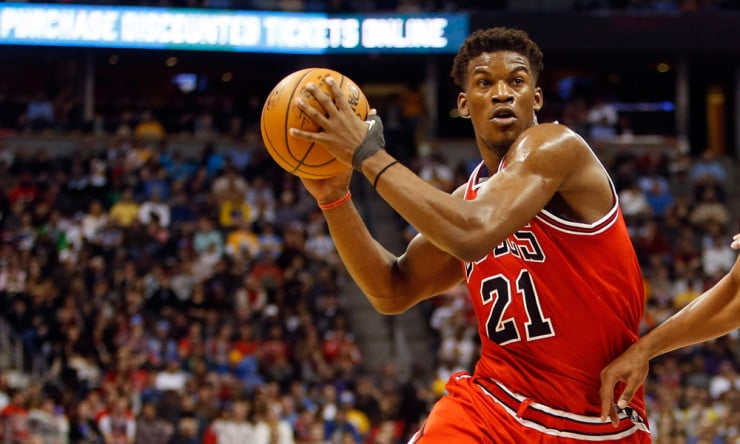 For a tremendous chunk of Game 2, the Chicago Bulls didn’t look significantly better than the Milwaukee Bucks. The Bulls were really sloppy to start the game, playing fast and loose in a way that was very successful for them in Game 1, only this time around it led to a ton of first quarter turnovers. Rose, universally lauded for his great performance in the first game of the series, didn’t score a point in the first half, while the entire Bulls team only scored 11 points total in the first quarter.

Things didn’t start off pretty, but they certainly did end up that way for Chicago, who had a lot more success in the second half, not coincidentally at exactly the same time that Rose got himself cooking in the third quarter. The fourth quarter was Jimmy Butler’s, however, as he threw down a massive dunk and knocked down a couple of heat-check three-pointers to really put the nails in the coffin for Game 2.

At this point in the series, the Bulls probably aren’t feeling a whole lot of pressure, though head coach Tom Thibodeau almost certainly is hoping to keep the team focused as the series heads 90 minutes north to Milwaukee. All they have to do is keep up the defensive intensity and make sure that Rose and Butler continue to stay hot on offense, and they should be okay. Rebounding never was going to be a problem in this series, and that edge should continue to help Chicago move one step closer to the Conference Semifinals.

The Bulls were the second-best road team in the Eastern Conference this season, so a couple of games in Milwaukee, where there always are tons of Bulls fans, shouldn’t slow the team’s momentum.

This Milwaukee Bucks never were going to be the favorites to win this series, if only for the fact that everybody except Nikola Mirotic has playoff experience on the Chicago roster, while Milwaukee’s three best players – Giannis Antetokounmpo, Khris Middleton and Michael Carter-Williams – all are playing in their first playoff series. What they’re experiencing through the first two games in this series can only be viewed as a learning experience.

To be fair, they looked a lot better in Game 2. Middleton really got cooking offensively and Antetokounmpo did a good job (in the first half, at least) being aggressive on offense and attacking the basket. Carter-Williams, meanwhile, did an excellent job holding Rose scoreless in the first half, while John Henson flexed his muscles a bit with a rough elbow to Aaron Brooks and a stare-down with Joakim Noah.

The Bucks were scrappy for three quarters in Game 2, playing the kind of defense they built their identity around, but eventually the better team pulled away, and it’s hard to determine what Milwaukee should do in Game 3 to keep that from happening again.

It would be nice to think that the home crowd could heal what ails them, but Chicago fans travel to Milwaukee in droves, and that arena is typically painted in red when the Bulls visit. The Bucks need to save face in Game 3 by playing the same gritty defense they played through most of Game 2 and, while there’s nothing wrong with being aggressive and physical, technical fouls and ejections won’t get it done. If they’re tough and focused, they can steal a game, but figuring out how to do that is part of the playoff learning process. So far, the Bulls are giving them quite an education.

It will be surprising if Chicago loses another game this series. Milwaukee has looked good in stretches, but the difference in experience here is glaring. Thanks to traveling Bulls fans, the Bucks don’t even get true homecourt advantage in Game 3. The Bulls should take this one and push Milwaukee toward the brink of elimination.