The LA Lakers beginning July 2019 as +280 favorites to win the NBA Championship spoke volumes about how 2019/20 is expected to unfold. With the Golden State Warriors +1000 to win the big one, the winner of the Pacific Division seems like an open-and-shut case at any rate, especially with Kevin Durant leaving the Warriors earlier this summer.

Some would say that Anthony Davis and LeBron James could win a championship by themselves, and this is certainly reflected in their standing, as joint fifth-favorites by a leading sportsbook, to be crowned the 2020 MVP. However, with other high-quality acquisitions expected to arrive over the summer, Lakers fans can safely look forward to some high-scoring wins and memorable margins.

Do the Lakers’ head-to-head histories with their Pacific Division opponents back up this belief? Be in suspense no longer… 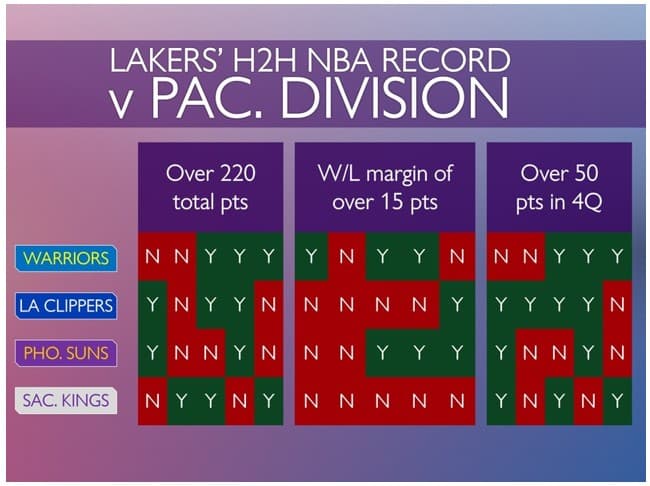 With the Clippers, the Warriors and the Lakers in the top five of most futures lists to win the NBA finals in 2020, it is easy to write off every other franchise in the Pacific Division – especially with Sacramento Kings and Phoenix Suns priced at +10000 and +20000 to stun the world.

The real contenders to win the Pacific Division are clearly marked by the trusted sports betting sites. There’s usually as little difference in the odds as there is between the processes of placing a bet with each of these sites (meaning bettors usually have to seek better value through the range of sizeable bonuses available). But there is still a lot of room for some drastic fluctuation in the days immediately after the start of the free agency period. In turn, this makes the analysis of head-to-head trends all the more important, when it comes to calling games.

As ever, the Lakers’ meetings with the Clippers will be an obvious highlight, and the final quarter certainly brings out the big guns in these battles for LA bragging privileges. In terms of pure results, the Lakers’ win over the Clippers back in April was also their first in regular NBA time in exactly a year.

By contrast, Sacramento Kings are one of the Lakers’ favorite opponents, with the Lakers winning four of the last five H2H fixtures, and the sole loss in that sequence coming by just one point. On that occasion, the Lakers were also leading 95-84 after three quarters, with only a late collapse preventing them from getting what would now stand at a flush run of five H2H wins.

The battle for Pacific dominion

As the second-favorites to win the Pacific Division, Golden State Warriors are expected to be the Lakers’ biggest obstacle towards winning the division. The Lakers won the last encounter as recently as 3 July in a summer league clash, and the ten-point margin represented a huge swing from the last NBA meeting, which yielded an 18-point defeat for the Lakers.

In NBA meetings alone, the last two meetings have shown a downturn in the cumulative points tally, and, quite poetically, this has also had a knock-on effect on the number of points scored in the final quarter. The last clash was also the first time in six encounters that one team failed to hit triple figures.

Ultimately, based on the last five H2H encounters, the Lakers’ matches against the Clippers and the Kings are likely to be close-fought in 2019/20. Indeed, just one or two shrewd signings for either of the Lakers’ main rivals can only see the currently short odds against the favorites lengthen in due course.