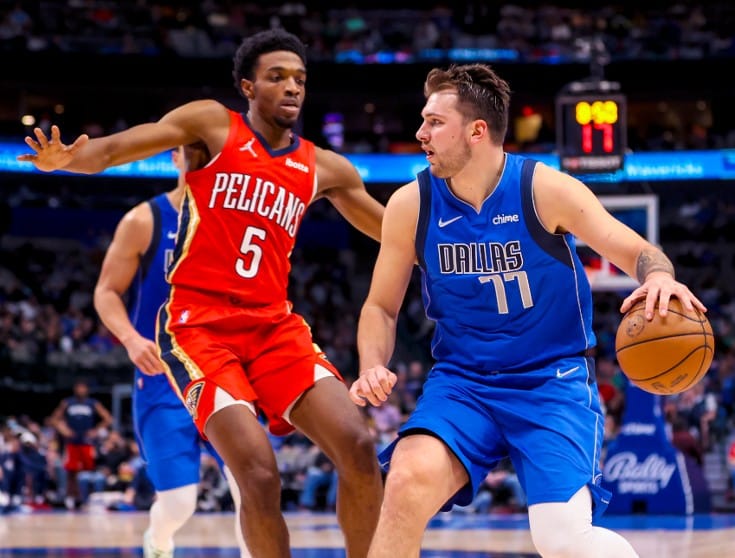 In Thursday night’s Western Conference rematch, the Dallas Mavericks (34-24, 31-26-1 ATS) are facing off versus the New Orleans Pelicans (23-35, 28-29-1 ATS); NBA picks are available here. Will Luka Doncic and the Mavs earn their third head-to-head win against the Pelicans this season? Along with the starting lineups, our top NBA picks and betting trends are posted below.

All Mavericks vs Pelicans betting odds can be found at BetOnline

Additionally, on Tuesday, in the Mavericks’ 107-99 road win over the Heat, guard Luka Doncic finished his performance with another double-double. He amassed 21 points, 10 rebounds and 6.0 assists in 38 minutes spent on the court. Not to mention, Dwight Powell and Maxi Kleber each contributed 19 points. Dallas has won seven of its past 10 games. After this unexpected win, the team is 14-13 away, 20-11 at home and 15-12 ATS on the road.

Meanwhile, in the Pelicans’ 121-109 home loss versus the Grizzlies, guard CJ McCollum led his team in scoring. He accumulated 30 points in 38 minutes of action. Center Jonas Valanciunas closed out his outing with 19 points, 6.0 rebounds and 7.0 assists in 38 minutes played. New Orleans has won five of its previous 10 contests. Including this defeat, the Pelicans are 13-16 at home, 10-19 away and 15-13-1 ATS at home this season.

Referring to ESPN’s Basketball Power Index, the Mavericks have a 54.2% probability of winning.

Furthermore, in the previous three head-to-head matchups, the Mavericks are 2-1 against the Pelicans. On Dec. 3, 2021, the third time these teams met during this regular season, New Orleans won 107-91 at American Airlines Center. On Dec. 1, 2021, the Mavs defeated them 139-107 at Smoothie King Center.

In other news, after the Pelicans lost to the Grizzlies on Tuesday, head coach Willie Green reassured reporters that he still has full confidence in Devonte’ Graham. “The last couple games haven’t been great for Devonte’, but we believe in him,” said Coach Green. So far this season, the fourth-year player is averaging 13 points, 2.5 rebounds and 4.5 assists per game.

Willie Green: "The last couple games haven't been great for Devonte', but we believe in him."

Leading into tonight’s intraconference matchup, Dallas is a three-point favorite on the road. Luka Doncic has been carrying this team on his back for a long time; he needs extra support. Otherwise, the guard could sustain a major injury. In closing, pick the Mavs to win, they will cover the spread and the total will go over 214.5. If you have never placed a bet, check out our handicap betting guide. Other NBA Picks are on the main page.