Patterson Loving Life With the Hawks 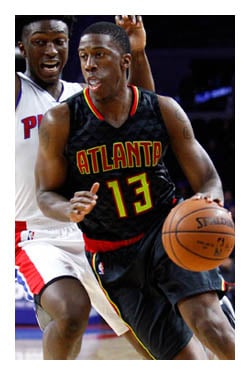 As if being in the NBA wasn’t surreal enough, the shooting guard has carved out a role in the Hawks’ rotation early in the season. Ask Patterson how he’s doing these days and he’s understandably ecstatic.

“It feels great,” Patterson told Basketball Insiders. “Overall, this whole fit has just been perfect. I can’t even put into words how perfectly this has all worked out. It’s special to be a part of this. I’m on a great team with a great fan base and great teammates and a great coach. Everything is awesome right now.”

The Hawks are currently 7-2, which puts them in second place in the Eastern Conference standings. Atlanta ranks fifth in the NBA in offense – scoring 104.4 points per 100 possessions – and they once again have a balanced attack, as six of their players are averaging double-digit points.

There have been a number of pleasant surprises for the Hawks this season. Kent Bazemore has stepped up in a big way, replacing the departed DeMarre Carroll in the starting lineup and averaging an impressive 11.8 points, 4.9 rebounds, 2.7 assists and 2.1 steals in 28.7 minutes per game.

But Patterson may be the biggest shocker, considering he entered the season as a relatively unknown rookie on a contract that wasn’t guaranteed. Now, he’s providing solid contributions off of the bench when given playing time. He chipped in 17 points, five assists, five rebounds and two steals during Atlanta’s first three games, and he continues to play well in spot minutes.

It’s not easy for a rookie – particularly a late second-round pick – to see the floor while playing for a contending squad, but that’s exactly what Patterson has done. Head coach Mike Budenholzer felt confident putting him in the rotation after the shooting guard played well in training camp and the preseason. To get an idea of how he played, look at Atlanta’s final exhibition game against the Detroit Pistons when Patterson had 18 points, six assists, four steals, three rebounds and a block off the bench.

One reason why Patterson has been able to see the floor is because he isn’t your typical rookie. Prior to joining the Hawks this season, he had a four-year collegiate career at Pittsburgh and then he spent last season playing professionally for Tofaş S.K. in Turkey. While overseas, Patterson averaged 11.2 points on 50 percent shooting from the field along with 3.4 rebounds, 2.2 assists and a steal in 28 minutes per game. The experience really helped him grow as a player and now, at 24 years old, he is more NBA-ready than most of his first-year peers.

Even though his transition to the NBA has been smooth, Patterson admits that he is still getting acclimated to the league and that there’s much more he must learn.

“At first, it was kind of crazy,” Patterson said when asked about adjusting to the NBA. “Coming into the season, I had no clue what to expect. Now, I feel confident and comfortable when I’m on the court. It’s great to have a head coach who has faith in you and will have you out there on the court late [in games] alongside the vets. My confidence is good right now. With that said, I know there are still a lot of things that I need to work on. I didn’t know what to expect coming in, but now that I’m here, I’m figuring out what I need to do. The coaches just want me to play defense, compete, knock down shots when I can and just be a smart player. I think that’s what has gotten me onto the court.

“Being out there on the floor and talking to the vets has helped me. Those guys tell me, ‘We have 82 games and you can’t dwell on what you did last game. Learn from it and move on, because you have another game the next day.’ That’s pretty much the message they’re giving me. I have great guys helping me. Thabo Sefolosha is always in my ear and helping me figure out the league. All of these guys have taken me under their wings. They want me to be the best that I can be, so that I can help the team be the best that it can be.”

Not every rookie who joins a contender has Patterson’s positive experience. Sometimes, the young players who enter that kind of situation end up miserable for a number of reasons: playing time is typically hard to come by, there aren’t many other young players around, and the organization may not focus on developing their prospects since they’re in win-now mode.

However, Patterson is playing, receiving valuable lessons from veterans, learning from the NBA’s reigning Coach of the Year and winning over Hawks fans with his play.

“I’m just extremely blessed,” Patterson said. “If you want to be the best, you have to learn from the best. That’s what we have on this team. We had four All-Stars last year. We had the Coach of the Year. Kyle Korver is considered one of the best shooters in the NBA. Thabo Sefolosha is considered one of the best defenders in the NBA. We have some of the hardest workers in the league on our team. I’m just taking things from each person and trying to use them. I want to learn from these guys and they’re more than willing to give me advice. It’s awesome to be in this situation, especially being the type of player I am. It’s truly a perfect fit.”

With the Hawks, Patterson also has an opportunity to go on a deep playoff run and potentially compete for a championship. That’s certainly the goal in Atlanta, as Patterson learned on day one.

“I remember on Media Day, one of the first things that Coach Bud started talking about was the playoffs,” Patterson said. “We were talking about how we would do in the playoffs, and that pretty much set the tone. From there it’s like, ‘Okay, this is a winning team and anything less than [contending] is unacceptable.’ You can see the hunger and drive in these guys. These guys don’t like to lose, man. The look in their eyes during crunch time… it’s intense. You can see why they won 60 games last year.”

As Patterson faced off against NBA competition for the first time, it wasn’t the speed of the game or the talent level of his opponents that caught him off guard. Instead, he was most shocked by the level of physicality in the NBA. He didn’t anticipate that, especially with how the NBA is perceived.

“The most surprising thing is how physical the NBA actually is,” Patterson said. “On T.V. you sometimes see some players flopping and stuff like that so when you aren’t in the league, you think, ‘Oh okay, the refs must call everything.’ But the league is, like, extremely physical! There have been plays that I’ve gotten away with and plays that others have gotten away with where I’m like, ‘Wow, this is a physical league!’ I’ve heard people say that the NBA is going soft, but I believe this league is still top notch in physicality. I think that was the biggest surprise for me.”

Patterson says that Miami HEAT guard Dwyane Wade was one of his toughest defensive assignments so far, but one thing he has learned is that just about everyone in the NBA is talented enough to humiliate you.

“This league features the best of the best right here and everyone is a great player,” Patterson said. “You really have to be dialed in at all times when you’re on defense otherwise you’re going to get embarrassed.”

Patterson has been dialed in so far, which has led to individual and team success. His best basketball lies ahead of him, but he’s certainly ahead of schedule as his NBA career gets off to a solid start.

If you missed it last night, the newest episode of the Basketball Insiders Podcast was posted. In this installment, Basketball Insiders salary cap expert Eric Pincus and Denver Post NBA writer Chris Dempsey talk Emmanuel Mudiay and the Nuggets, the unstoppable Warriors, the surging Pistons, the HEAT-Grizzlies trade and more. Listen below: