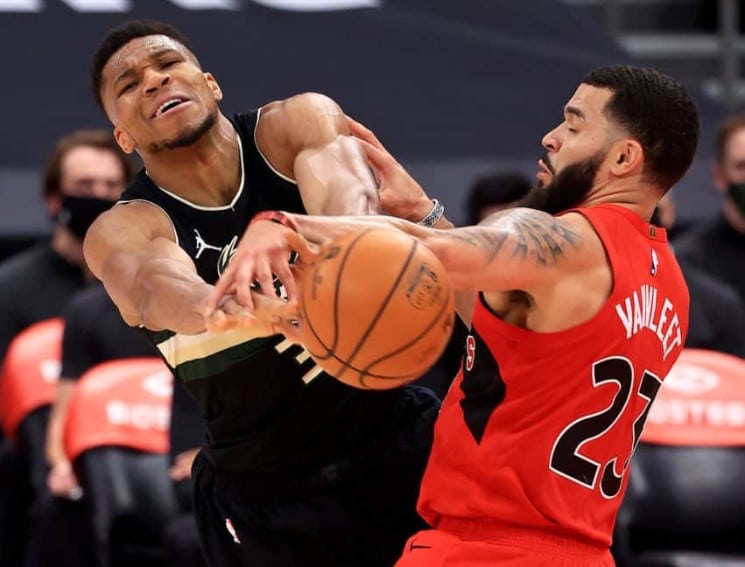 For Thursday night’s Eastern Conference clash, the Milwaukee Bucks (14-8) are aiming to add to their eight-game winning streak this season versus the Toronto Raptors (9-13). Can Fred VanVleet and the Raptors end their three-game skid by defeating the Bucks?

Heading into tonight’s intraconference matchup, the Bucks are 10-11 against the spread in the 2021-22 NBA season, while the Raptors are 8-14 against the spread. This game airs live at 7:30 p.m. ET via Bally Sports North, Bally Sports Wisconsin, NBA League Pass and TSN. According to Land of Basketball’s database, based on 95 regular season games played all-time, Milwaukee is 54-41 versus Toronto. Notwithstanding the Bucks’ winning record, they are 3-7 against the Raptors in the last 10 head-to-head meetings. On Feb. 18, 2021, the last time these teams met, Toronto won 110-96.

After the Bucks defeated the Hornets 127-125 on Wednesday night, head coach Mike Budenholzer was asked about Giannis Antetokounmpo’s game-winning layup. “I mean, that’s a hell of a finish. He’s just so talented,” replied Coach Budenholzer. “And he does so much around the rim. The dunks and everything get a lot of attention and probably for good reason, but I think [that’s] his ability to use the glass and his ability to play fast.” The Bucks are now focusing on extending their winning streak against the Raptors.

Budenholzer, on the shot: "I mean, that's a hell of a finish. He's just so talented. And he does so much around the rim. The dunks and everything get a lot of attention and probably for good reason, but I think (that's) his ability to use the glass and his ability to play fast."

Additionally, in the Bucks’ high-scoring, 127-125 win over the Hornets on Wednesday, forward Giannis Antetokounmpo added another double-double to his career total. The Greek Freak closed out his showing with 40 points, 12 rebounds and 9.0 assists in 38 minutes on the court. Forward Khris Middleton had 21 points, 6.0 rebounds and 5.0 assists in 33 minutes, too.

As for the Raptors, on Tuesday, in their 98-91 home loss against the Grizzlies, forward Pascal Siakim scored a team-high 20 points in 30 minutes on the court. Rookie forward Scottie Barnes ended his performance with 19 points, 7.0 rebounds and 3.0 assists in 38 minutes of action. In the opening quarter, the Grizzlies outscored them 27 to 18.

For interesting betting trends, the Bucks are 4-1 ATS in their past five performances. Next, the total has gone under in 13 of the team’s last 19 contests. Not to mention, they are 3-7 ATS in their previous 10 games played versus Toronto. Lastly, Milwaukee is 5-0 straight up in the team’s past five matches against Eastern Conference opponents, and the total has gone under in 11 of their last 15 contests versus Atlantic Division opponents.

On the other side, the Raptors are 1-4 ATS in their previous five performances this season. Also, the total has gone over in seven of Toronto’s last 14 contests. And, the team is 0-6 ATS in their past six games played at Scotiabank. Next, the total has gone under in five of the Raptors’ previous seven matches when playing the Bucks in Toronto. Taking everything under consideration, think about picking the Bucks to win and cover the spread.

Pick the Bucks to win, they will cover the spread and the total will go over 215. Milwaukee is a 4.5-point favorite with BetUS.